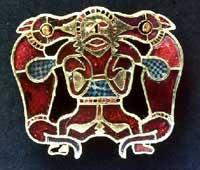 After Wulfhere, Aethelred and Aethelbald laid the foundations, a prince from the Hwicce, Offa, took Mercia to its greatest achievements.

In 755, the Anglo Saxon Chronicle suddenly breaks into lyricism, with a story about the King of Wessex that has all the hallmarks of a great ballad told in the halls of the powerful – which someone wrote down.

The link to Cynewulf and Cyneheard on Youtube is here, so you can go and like it or whatever one does. Below is the main part of the entry for 755, which is probably the wrong year

This year Cynewulf, with the consent of the West-Saxon council, deprived Sebright, his relative, for unrighteous deeds, of his kingdom, except Hampshire; which he retained, until he slew the alderman who remained the longest with him.  Then Cynewulf drove him to the forest of Andred, where he remained, until a swain stabbed him at Privett, and revenged the alderman, Cumbra.  The same Cynewulf fought many hard battles with the Welsh; and, about one and thirty winters after he had the kingdom, he was desirous of expelling a prince called Cynheard, who was the brother of Sebright.  But he having understood that the king was gone, thinly attended, on a visit to a lady at Merton rode after him, and beset him therein; surrounding the town without, ere the attendants of the king were aware of him.  When the king found this, he went out of doors, and defended himself with courage; till, having looked on the Ætheling, he rushed out upon him, and wounded him severely.  Then were they all fighting against the king, until they had slain him.  As soon as the king’s thanes in the lady’s bower heard the tumult, they ran to the spot, whoever was then ready.  The Ætheling immediately offered them life and rewards; which none of them would accept, but continued fighting together against him, till they all lay dead, except one British hostage, and he was severely wounded.  When the king’s thanes that were behind heard in the morning that the king was slain, they rode to the spot, Osric his alderman, and Wiverth his thane, and the men that he had left behind; and they met the Ætheling at the town, where the king lay slain.  The gates, however, were locked against them, which they attempted to force; but he promised them their own choice of money and land, if they would grant him the kingdom; reminding them, that their relatives were already with him, who would never desert him.  To which they answered, that no relative could be dearer to them than their lord, and that they would never follow his murderer.  Then they besought their relatives to depart from him, safe and sound.  They replied, that the same request was made to their comrades that were formerly with the king; “And we are as regardless of the result,” they rejoined, “as our comrades who with the king were slain.”  Then they continued fighting at the gates, till they rushed in, and slew the Ætheling and all the men that were with him; except one, who was the godson of the alderman, and whose life he spared, though he was often wounded.  This same Cynewulf reigned one and thirty winters.  His body lies at Winchester, and that of the Ætheling at Axminster.  Their paternal pedigree goeth in a direct line to Cerdic.

12 thoughts on “3 The Mercian Supremacy”