Everything changed for Anglo Saxon England in 866; the sons of Ragnar Lothbrok came for conquest, not just treasure and slaves.

The Arrival in East Anglia, 866

In 866, a great Heathen Army, micel heathen here, arrived on the shores of East Anglia. It is difficult to know how big the army was, but 3,000 seems a reasonable figure. Although referred to as an army of Danes, in fact it was probably drawn from many King Edmund of East Anglia was unable to turn them away – instead he gave them food and horses – and in return Ivarr the Boneless, the probable leader of the Vikings, promised to leave then alone for a while. The agreement was an enormous success for the Vikings – the weakness of the Anglo Saxons was made plain, the cost of providing horses immense.

The Fall of Northumbria, 867

Northumbria was torn by civil war – and so when the Vikings arrived from East Anglia in early 867, they faced little resistance from King Osberht and Ælla of Bamborough; which mean that Eoforwic – York, the old Roman Eboracum – fell to the Vikings. But by March, both the Anglo Saxon had agreed to bury their differences to try to remove the Vikings, and attacked York. The result was the decimation of the Northumbrian nobility and death of both Ælla and Osberht. In 869, the Vikings returned to East Anglia. This time King Edmund fought; possibly at Hellesdon near Norwich, or Hoxne – I believe the map below shows Hoxne. The East Anglians fought, and lost:

In that year St Edmund the king  fought against them and the Danes took the victory, killed the king and overcame all the land. They destroyed all the churches they came to; the same time they came to Peterborough, they burned and broke, killed the Abbot and monks and all they found here. They made which was very great such that it became nothing. (Anglo Saxon Chronicle)

Here England found itself a patron saint. King Edmund was apparently given the choice of death, or abandoning his religion. He Chose death. The vikings tied him to an Oak tree – and filled him full of arrows. They cut off his head and the the head into the bushes. When the Anglo Saxons crept from their hiding places they came looking for the head – and the head cried out ‘here, here’ – and so it was found. A miracle!

St Edmund would keep his position until Henry III went potty with admiration for one of England’s feebler kings,  Edward the Confessor; and then when Edward III decided that ll these pious losers were not his idea of a proper patron saint, and chose St George.

The Fight for Wessex

Late 870, the Vikings moved on to attack Wessex, and made a camp at Reading. King Æthelred and his younger brother, Alfred gathered the West Saxon army and attacked their camp; but were driven off. Encouraged, the Vikings left their camp to attack south into Wessex. The story goes that Alfred went to the sarsen stone at Blowingstone Hill and by blowing through the holes called the West Saxons to arms. The two armies met at Ashdown – whose location is something of a debate. But the Anglo Saxon chronicles spoke of a great victory where the viking king Basecg and many jarls were killed.

In fact, it may not have been such a great victory. Because in in 870 the two sides were still fighting. At Basing and Maredunn Æthelred and Alfred were beaten again. And then to their despair, a powerful army got even stronger – a viking fleet appeared up the Thames at Reading in April 871, carrying another army of Danes, probably under Guthrum.

Æthelred chose this moment to die. He left two sons – Æthelwold and Æthelhelm, both very young. The Witan had no interest in being lead by children at a time of such danger; and so the Anglo Saxon tradition was followed of choosing the best from the Æthelings – and that choice was the youngest and last remaining of the 5 sons of Æthelwolf, Alfred. 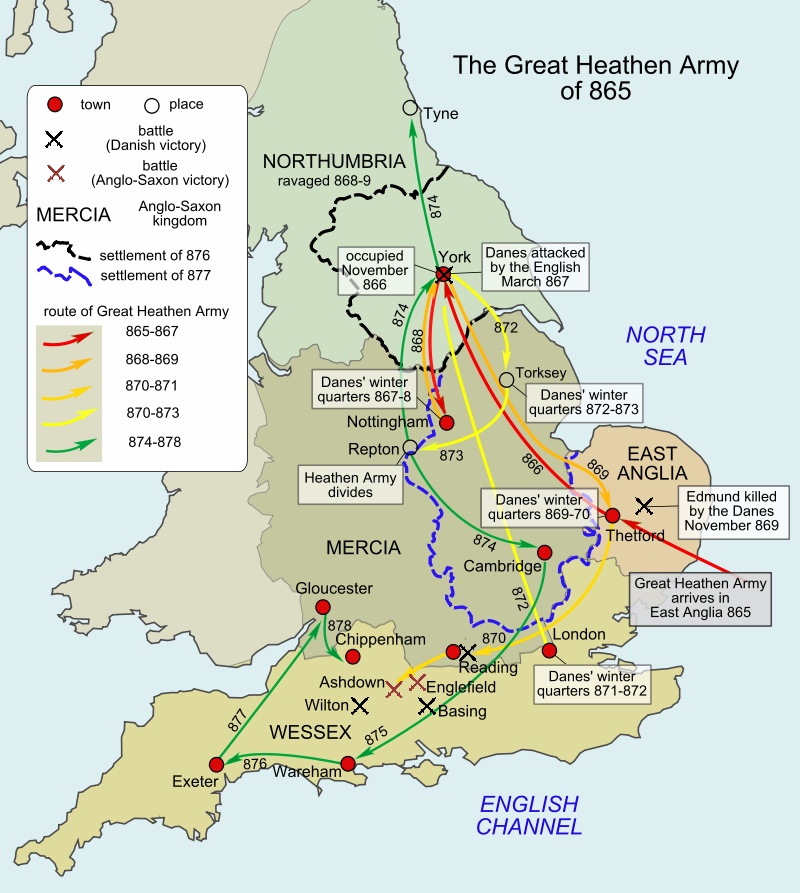 21 thoughts on “6 The Great Heathen Army”