Skip to content
You are here
Home > Podcast > 26 William Rufus, Normandy and the First Crusade

William Rufus was a flamboyant, red faced, pudgy and irreverant bloke, but none the less his father's favourite son. So Dad tipped him the wink and he left the death bed to take the throne of England from his older brother. And spent his reign trying to re-unite England and Normandy again.

William's reign is dominated by 4 themes:

This episode we'll talk about the first two. And a bit about the First Crusade, for no good reason.

A brief guide to medieval taxation

Rufus and the first Chief Justiciar of England, Ranulph Flambard, used all the means at their disposal to raise money.

Norman kings steered a very fine line. Charge too much for all this stuff and you have a baronial revolt on your hands. William got away with it – but was always close to that line.

Rufus first had to fight Robert Curthose off – which he successfully did in 1088. And from then on he was on the offensive. But despite campaigns in 1091 and 1094, he never really had Robert on the run. Until in 1096, Robert heard Pope Urban II's call to the Crusade. William loaned him £10,000, and had control of Normandy until Robert came back. Pretty soon, William had re-asserted Ducal control over the baronage that Robert had lost.

The First Crusade affected England relatively lightly – though there are records of a fleet of ships that took an active part. But the largest part of the Crusade came from Northern France and Germany.

Alexios Comnenus was in fact probably pretty horrified when 35,000 hairy northerners turned up in Byzantium. And in fact, the Crusades did little for east-west relations. Alexios really fancied a load of gold to pay for mercenaries to regain lands for Byzantium. Instead, he ended up with 4 Frankish kingdoms in the Holy Land, who he understood less that he did the Turks. 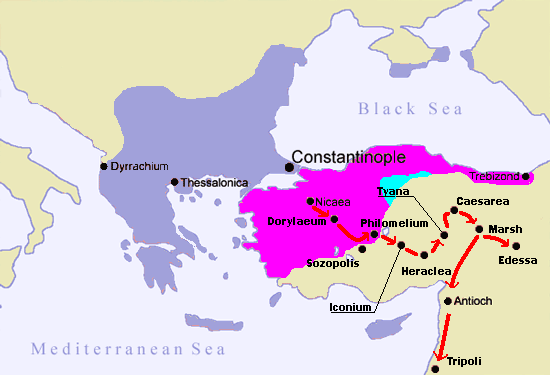 The march to the Holy land took the Crusaders first to Nicea, which they regained for the Emperor. At Dorylaeum, the Sultan of Rhum got his taste of western knights, and his arrows simply bounced off their armour. So he stood aside and waved them through.

At Antioch, the Crusaders faced a challenge they looked like losing. Camped in front of walls they couldn't properly blockade, they boiled in the heat, without sufficient food, while a Muslim relief army approached. But sneakiness won 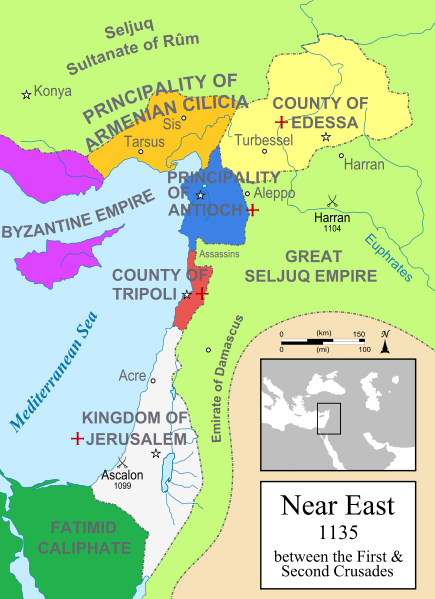 the day, when they bribed a Turkish captain to let them in. They slaughtered the inhabitants, Muslim and Christian alike. Then, inspired by the Holy Lance found within the walls, they put the Muslim army to the sword.

By then many leaders had left – Stephen of Blois for example. Their original army of 35,000 was down to 12-15,000. But on they marched to Jeruslaem. Their chances looked slim. The Turks had denuded the land around of food, and poisoned the wells. Jerusalem was a massive fortress. Another army approached from Egypt. But despite the odds, the desperate Crusader assault worked, and on 13th July 1099 Jerusalem was in their hands. The Crusaders celebrated with another orgy of destruction and murder that was to prevent any chance of working with the local Muslim population. Baldwin was crowned the first King of Jerusalem.

The final stroke was the Battle of Ascalon, where again a Muslim army was defeated, and many Crusaders came on home. Among them was Robert Curthose. Robert had a good crusade, involved in all the major battles, and there was even a rumour that he was offered the crown.

The First Crusade was massively helped by Turkish divisions, and really shouldn't have had much chance of success. It established 4 rather unlikely western kingdoms in the Levant that were to be the focus of 8 more crusades until the final fall of Acre in 1291.

4 thoughts on “26 William Rufus, Normandy and the First Crusade”