Skip to content
You are here
Home > Podcast > 30 Henry I – Barons, Warfare and Wales

The fight with Robert gave Henry a great chance to replace the old conquest families with his own men, and particularly in the Welsh Marches.  And this week we also do a catch up on what’s changed in warfare since Anglo Saxon times, and look at the situation that faced Henry in Normandy

30 Henry I – Barons, Warfare and Wales

Wales and England in the reign of Henry

Gruffydd ap Cynan of Gwynedd and Cadwgan ap Bleddyn of Powys, the princes of the Welsh kingdoms mainly held their own through the reign. In Southern Wales, the Norman marcher lords extended their control, while Gilbert fitz Richard conquered land in Ceredigion. Henry made sure that the old marcher lords were replaced by his men; the families of FitzOsbern and Montgomery had gone, replaced by the de Clares and Robert of Caen, the Earl of Gluocester.

The Marriage of Matilda

At the age of 7, Henry’s only legitimate daughter was betrothed to Henry V, the Holy Roman Emperor. 5 years later in 1114 they were formally married. It was a brilliant and prestigious match for Henry of England.

The balance of power in northern France 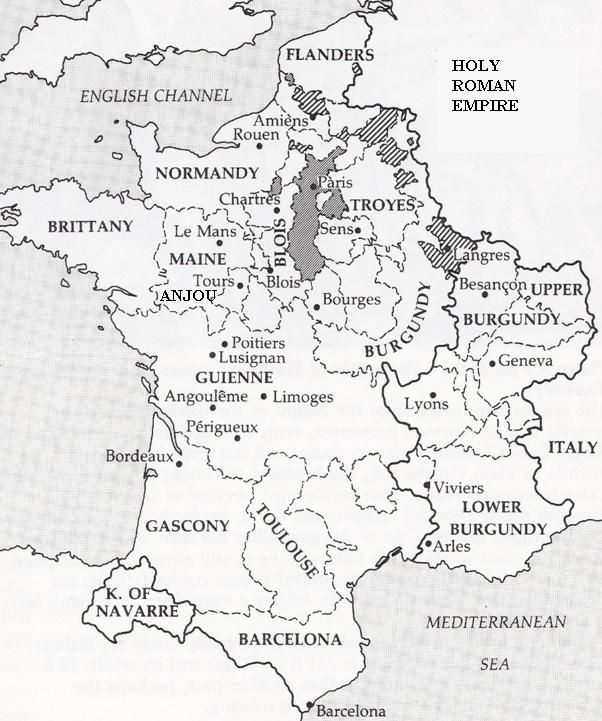 Matilda’s marriage completed Henry’s series of defensive relationships. In the English corner were:

The Holy Roman Emperor, Henry V: to the east, embroiled in struggles with the Count of Flanders. The relationship delivered less than Henry might have hoped, but did help distract Louis VI of France until Henry V’s death in 1125.

Blois: to the south east of Normandy. Theobald of Blois needed English help to avoid being crushed by France to her north. And Theobald’s mother was Adela, Henry’s sister, so they were family. Theobald had 2 younger brothers; Stephen of Blois was heavily enriched with lands in England and married Matilda of Boulogne, the heiress to Boulogne. Then there was Henry of Blois, Abbot of Glastonbury from 1126 and Bishop of Winchester from 1129.

Brittany: To the south west, the Breton Count Conan III was a vassal of Henry’s

Ranged against Henry were:

Fulk V of Anjou: To the south Fulk also inherited Maine and refused to pay homage to Henry I in respect of Maine as was traditional. Mainly hostile to Normandy though a bit on-off. Fulk left for a crusade in 1119-1120, and then again in 1127. In 1129 he married Melisende of Jerusalem and became king of Jerusalem. His son Geoffrey would marry Henry’s daughter Matilda, and would be the father of Henry II, the first of the Angevin Kings of England.

Flanders: The history of Flanders and their attitude to Normandy is chequered, but is mainly hostile. Baldwin VII (1111-1119) was hostile; then Charles the Good (1119-1127) was less so, before being murdered while at prayer. Then William Clito became Count for 1 year (1127-8), before being succeeded by Thierry, who had no quarrel with Henry I.