Richard came into the lands of his father and was crowned at Westminster in 1189.  For the next 6 months he was packing his bags,  cleaning the fridge and getting ready to go. He sets up his administration, makes sure his borders are safe and sets off for Sicily. So was Richard a feckless warrior who had no interest in administration ? We talk also about the Jewish communities in England.

Did Richard strip England bare of money and desert her without a thought?

Yes, yes he did.  But he did nothing exceptional, nothing anyone had done before. Take one example; he fires 22 of the 27 sheriffs of Henry's reign, and makes anyone who wants to replace them pay for the job. This sounds bad; but it's all perfectly normal, this is what has happened for ages. And the men who Richard appointed have all been shown to be experienced administrations, not chinless rich fly by nights. So yes he gathered as much money as he could – but then he was raising an army for the greater good of Christendom. But no, he didn't just wander off without making sure the fridge was clean before he left. He left trusted administrators in place.

Richard makes arrangements to deal with all his external enemies:

The Jewish communities of England

There were probably no more than 5,000 Jewish living in England at the time of Richard II in 21 cities around England. While the coronation of Richard was going on, the Jewish community came forward to give him a gift. The Christians didn't like this – and riot started. Although the Jews did not live formally in a ghetto, they lived in close communities – and they burned.

Richard was furious. The Jews had a special relationship with the King – they were under his special protection. They enjoyed their own laws and rights under the king. But they paid a heavy price. Richard may or may not have been cross at the bigotry and violence – but mainly he was worried because the Jews were a major source of Income for him. He levied special taxes from them, and used them for credit. 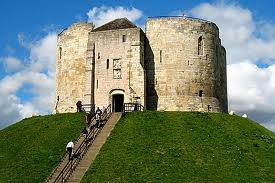 So Richard sent stern notes to all the shires warning against any violence, and punished the offenders in London. But none of this prevented the worst of England's pogroms- in 1190 in York. Essentially, 150 Jews took refuge in Clifford's Tower in York. But the mob surrounded the castle, and most of the Jews decided to kill themselves and their families rather than be taken, with hideous echoes of Massada in 70 AD. The rest were offered safe conduct by trhe Christians if they came out – and then were slaughtered when they did. Oddly, the mob then moved on to burn all the Jews' documents – including the record of their debts.

The Jewish community was isolated by religion and race and profession, and were terribly vulnerable. For a while they at least had the king's protection – but when the kings had finally sucked them dry their last defence would be gone.