For 50 or so years after the capture of Jerusalem, Outremer was a part of the political and military dance between Christian and Muslim states. Then in 1144, signs of Muslim unity begin to appear through Nur ed Din when Edessa falls, and by 1150 one of the states is wiped off the map. Outremer has passed its high point. But it's not until the 1170's that Saladin, as leader of unified empire that included Egypt and Syria, was able to really threaten the Christian states. In 1187, after the dramatic battle of Hattin, Jerusalem and most of Outremer falls and is left with just a few toe holds on the coast. In 1190, Saladin's army is looking to finish the job when Richard and Phillip arrive at Acre.

47 The Fall of Jerusalem

If you want a good simple overview of all the Crusades, there's  the Crusades site by Skip Knox at Boise State University.

See recommended books in the Bookshop. I'd recommend:

Steven Runciman 'The History of the First Crusade and the Foundation of the Kingdom of Jerusalem' which treads the perfect line between scholarship and a good story, or

Jonathan Riley Smith 'The Crusades: A History' which gives a brilliant modern and balanced overview.

Outremer at its height 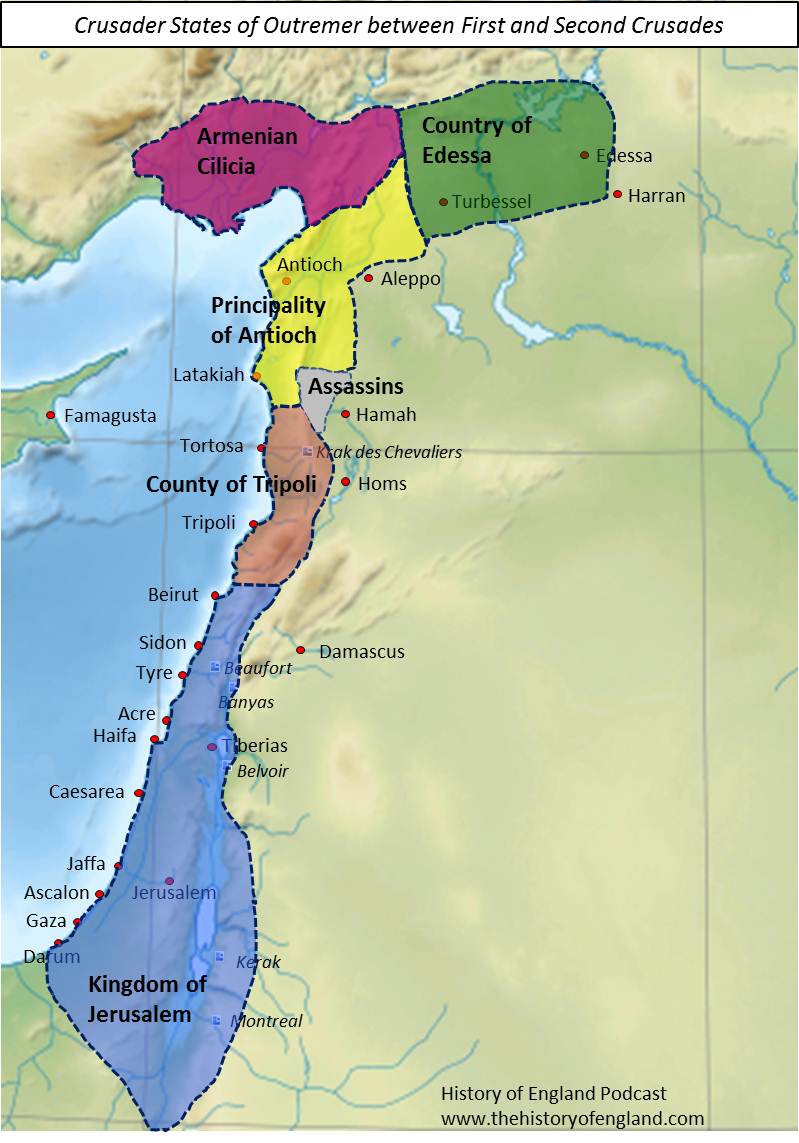 Meanwhile in Cilicia, i.e. the southern edge of Asia Minor, the Armenians had established a kingdom that despite the best efforts of the Empire managed to create a significant level of independence.

Great fortresses such as Kerak and Montreal (pictured below) defended the frontiers of all the states.

The Fall of Jerusalem, 1187 and its aftermath

Outremer's existence was made possible by the disunity of the Muslim states, and the strength of the Empire. Slowly these things began to change. In 1144 Zengi took the city of Eedessa, and by 1150 the whole county was no more. Nur ed Din arose as a leader that ruled both Syria and Egypt. His Nephew, was Salah ed Din, who spent many years consolidating his rule until he was ready to rub out the Christian states in a holy war.

Meanwhile, Manuel Comnenus was defeated at Myriocephalum in 1176, and the strength of the Empire was never to recover.

Despite Saladin's superiority in numbers, the capture of Jerusalem was not  a foregone conclusion. At the battle of Montgisard in 1177 for example, Saladin's army was surprised and defeated by King Baldwin IV, and Saladin had many distractions from areas such as Mosul. But the crucial blow came at the Horns of Hattin.

The Horns of Hattin

in June 1187, Saladin's army besieged Tiberias on the sea of Galillee.  According to Raymond of Tripoli, the Crusader army should stay safe at Acre, despite the fact that his wife was trapped at Tiberias. The heat would surely eventually  force him to withdraw. But Reynald of Chatillon and Gerard de Ridefort (Grand Master of the Templars) persuaded the king, Guy of Lusignan to attack.

On 2nd July, the Crusader army arrived at Sephoria (Saforie on the map). There was water there and a strong position – once again Raymond tried to  avoid disaster, arguing it would be madness to go further. But Guy was persuaded to attack.

Constant attack from Saladin's horse archers slowed the march. The wells at Turan were dry. By the afternoon of the 3rd July, the Crusader army had done no more that reach Hattin. The Templars begged for an end to the day's march, and when Guy agreed Raymond cried out that the kingdom was lost.

The army camped at Hattin, where two low hills were called the 'Horns of Hattin. They expected to find water – but again the wells were dry, and by the morning they were surrounded. In their desperation, discipline deserted the Christian army. Thirst drove the Christian footmen to surge towards the road that led to the sea of Galilee and water  and they were cut to pieces.  The knights retreated to a hill, where time and again they drove the Muslim army back until at last they were forced to surrender.

The defeat was catastrophic. Outremer had always suffered from a shortage of men, and now they had been killed or captured – there was no one left to defend the kingdom. 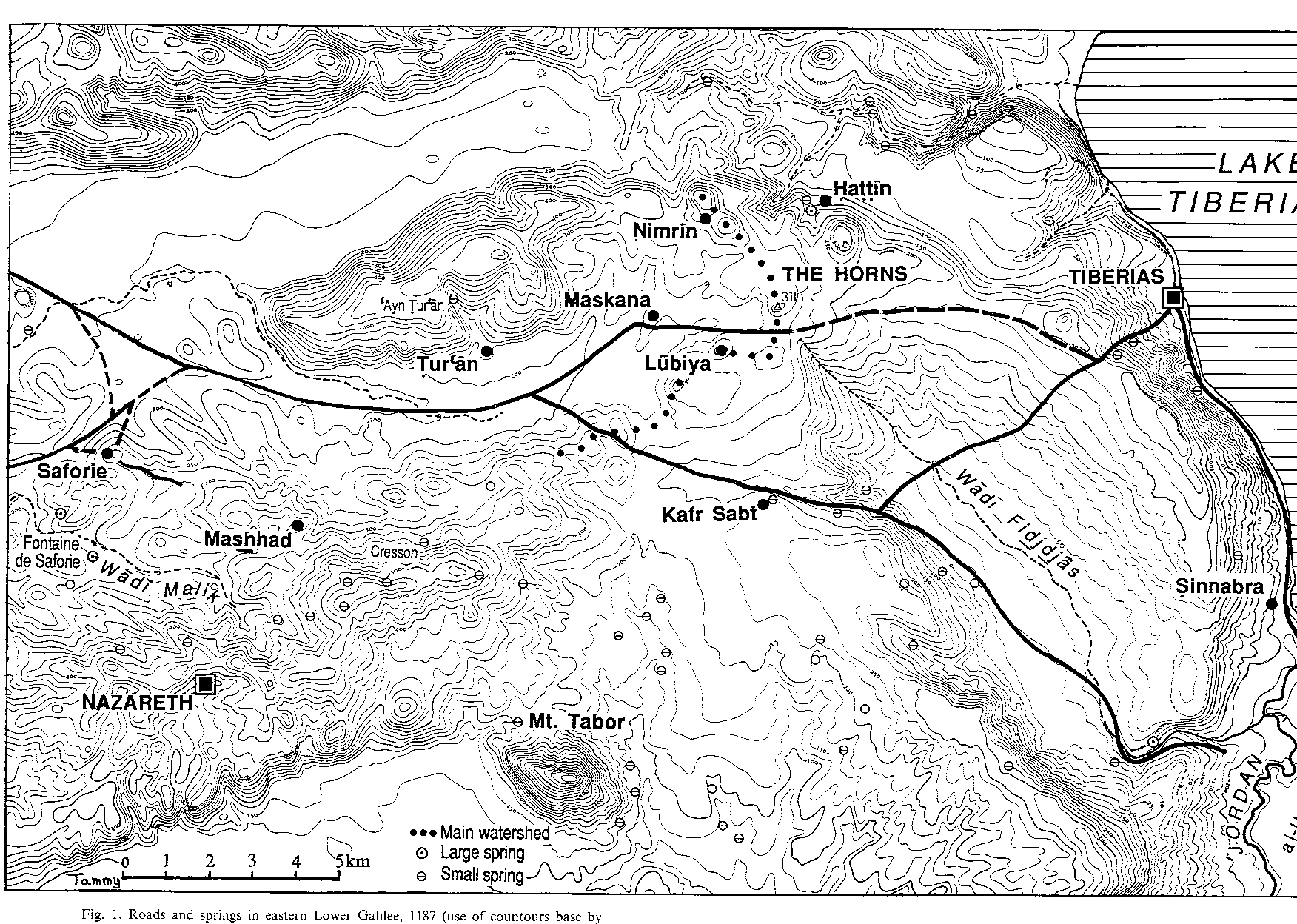 The Fall of the Kingdom 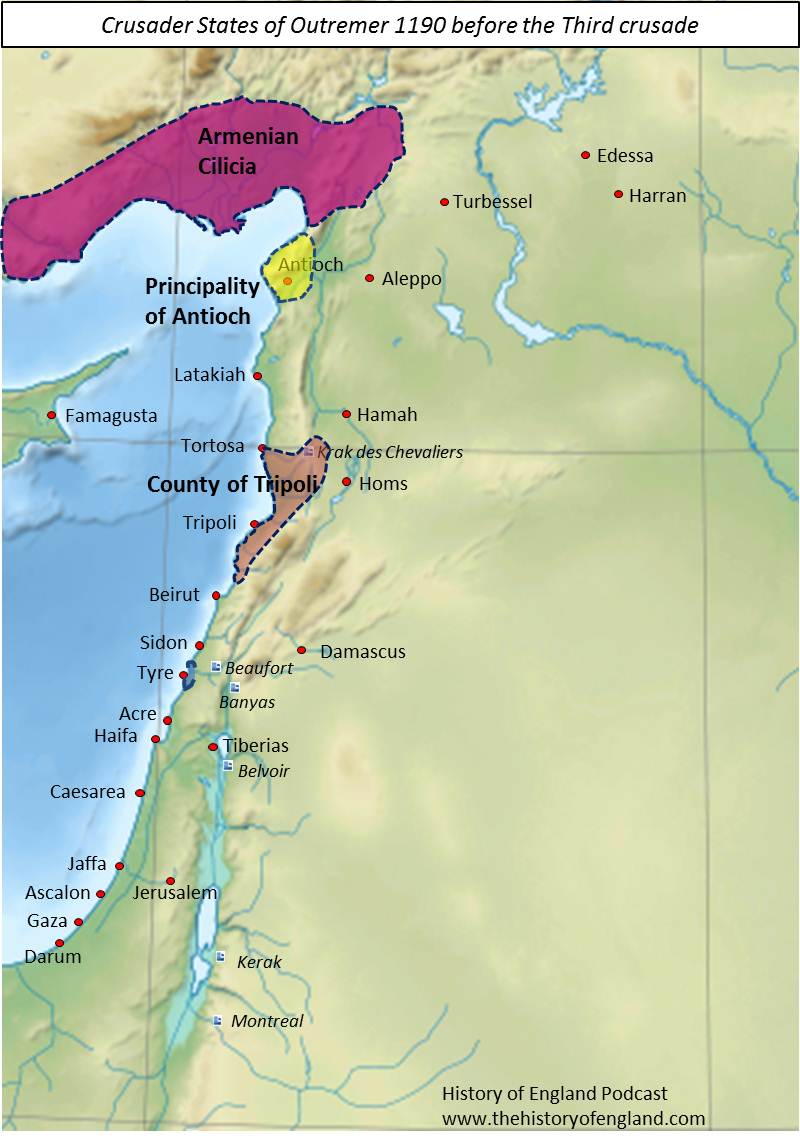 On 2nd October 1187 Balian of Ibelin was forced to surrender Jerusalem to Saladin. From there, Saladin swept through most of the kingdom and almost all of the great fortresses fell to him – Ascalon, Montreal, Kerak, Safed, Sidon, Beirut. The exception that saved the Kingdom was Tyre, which was held by the newly arrived Conrad of Montferrat.

By 1190, Outremer was reduced to a precarious series of toeholds and fortresses – Tyre, Beaufort, Krak des Chevalier, Antioch. Even the leadership was unclear, with Conrad of Montferrat and Guy of Lusignan each claiming the throne.

Remarkably, Guy and Conrad took the initiative, scraped together a force at besieged Acre in August 1189. At first, outnumbered, their position was precarious. But slowly they were joined by men from abroad, and when Richard arrived in June 1191 the siege was already 18 months old.

9 thoughts on “47 The Fall of Jerusalem”