Was the Third Crusade a success or a failure? While it failed to achieve its objective, it was the most successful after the First Crusade. It rescued Outremer from an eradication that looked all too likely in 1190. The Crusade was controversial even at the time – in the eyes of most of Christendom it made Richard a hero – the victor of Acre and Arsuf. But to Philip's friends, Richard had failed, and betrayed Christendom to the Turk. To my mind it gave Outremer another century of life until the fall of Acre in 1291.

48 Richard and the Third Crusade

The Fall of Acre

It's a bit of a push to give Richard the credit for the fall of Acre – after all,

Conrad and Guy had been working on it for the best part of 18 months when he arrived.  But Philip and Richard's men did transform the situation, and by 12th July 1190 the city had fallen. The whole event was marred by the massacre of 2,700 of the inhabitants outside the walls of Acre on 20th August. While there's no doubt that Richard ordered the massacre, it's equally clear that Saladin was playing for time in his negotiation, and had missed the deadline for delivery of half the agreed money by 11th August. Richard could not afford to be tied down an Acre. Richard raised the Royal Standard. We are not sure exactly what it looked like then, but from 1198 it was - Gules three lions passant guardant in pale Or armed and langued Azure – as above. 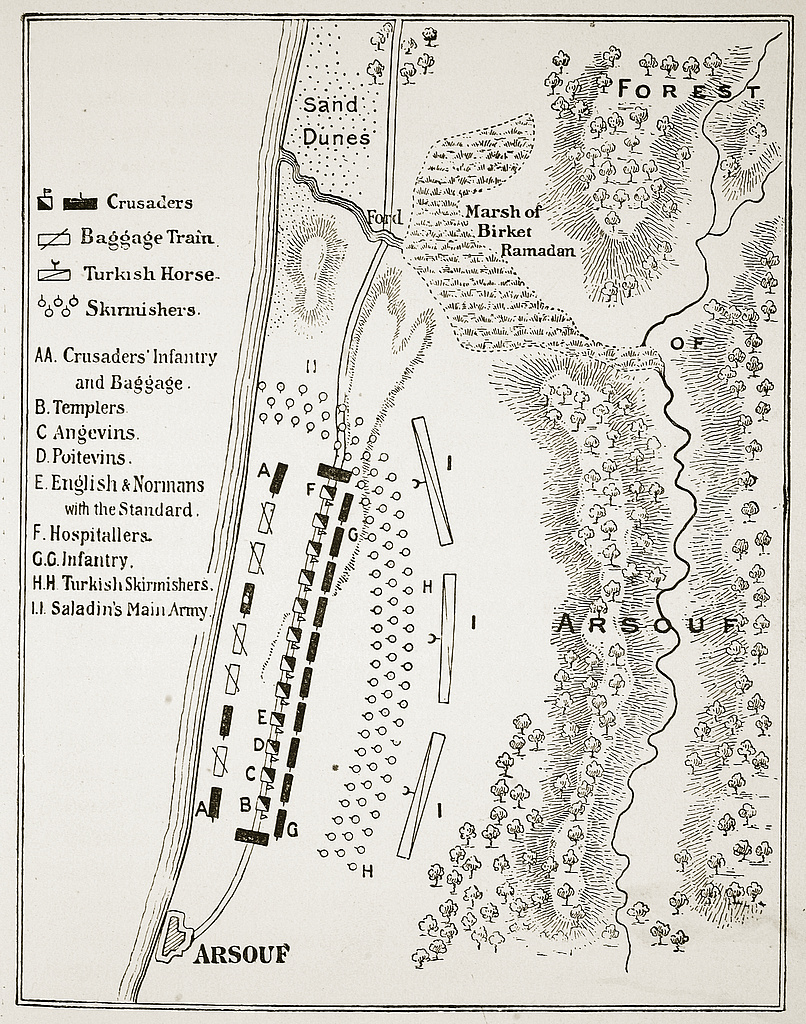 The objective was to march down the coast and take the port of Jaffa. Throughout the march, Saladin's army harried the Crusaders, trying to get them to break ranks – allowing themselves to be isolated and destroyed piecemeal. But Richard's discipline held, and Saladin knew he had to commit his whole army to stop the march.

He did this at Arsuf. Time and again his mounted archers and skirmishers goaded the Crusader line, time and again richard refused the pleas to break ranks and commit a cavalry charge. Until eventually at mid afternoon, the Grand Master of the Hospitallers lost his patience and ordered the charge with cries of 'St George!'. Immediately Richard ordered a general charge, holding the English and Normans in reserve.

Saladin's army retreated in disarray; but Tariq al Din counter charged with 700 elite bodyguard, on to be met by the English and Normans. The day belonged to Richard, and 700 of the Muslim army were killed. 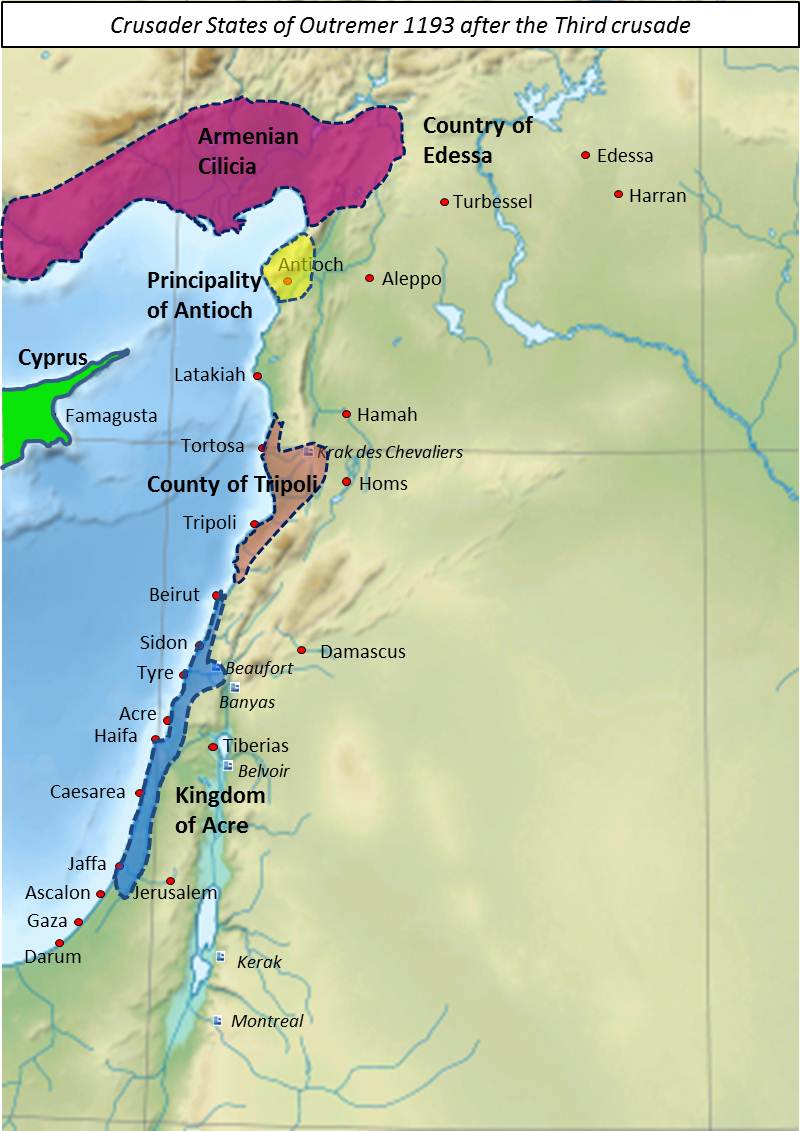 Richard left the Holy Land in October 1193. He had captured Acre, Jaffa, Ascalon (though the fortifications had to be destroyed) and Darum. His treaty with Saladin gave Christian pilgrims access to the holy places. But despite having got within 12 miles of Jerusalem he had failed to capture the city, and that had after all been the objective.

But he left behind a viable state that was able to defend itself, which had been on the point of collapse. The Third Crusade achieved more than any other except the First, and did this against a unified Muslim leader of enormous talent.

In addition of course, he left behind Cyprus, and uniquely important source of resources and support for Outremer, ruled by Guy of Lusignan.

By most standards the crusade was a success, and one where Richard had demonstrated both his military and diplomatic talent.

8 thoughts on “48 Richard and The Third Crusade”