Skip to content
You are here
Home > Podcast > 52 John Softsword

As a younger man, John had been given the nickname Lackland because unlike his brothers he didn't have his own appanage. At the Treaty of Le Goulet in May 1200 he acquired the name Softsword – people couldn't understand why he'd signed away Gisors, parts of Berry, £20,000 and bent his knee to Phillip. On the other hand, John probably felt he'd had a good deal. Then John caused fury with the Lusignan by stealing their bride, they appealed to Phillip and and Phillip declared John to be stripped of his lands. But at the start of the war, John gets off to a flyer.

It looked like a reasonable deal. In fact, it made it clear that the Angevins were subservient to the French king, which previously had just been a form of words. But John, from a commanding position in September 1199 was weaker in May 1200; his allies, the Counts of Flanders and Boulogne had left of crusade and John probably felt himself lucky.

Marrriage and the Lusignan

In 1200 John rocked up at the castle of his troublesome vassal,

Angouleme. There he met the 12 year old Isabella of Angouleme, and was so smitten that he married her the same year at Westminster. Even in those days, marriage to a 12 year old was unusual – a betrothal would have been more normal – but the Count didn't seem to object.

Now there were perfectly good reasons for marrying the girl, quite apart from her charms. Angouleme was a powerful count, had always been a problem to the Angevins, and this brought them inside the tent. But unfortunately Isabella was already betrothed to Hugh le Brun, count of Lusignan.

John could have made it work – but he didn't. He sent sheriff's into their lands and goaded them. The Lusignans appealed to Paris for justice from John, and took up the sword. John tried to avoid giving them the justice they deserved  and in the end, Phillip was able to wade in on the Lusignans' side. So in 1203 it was war again. 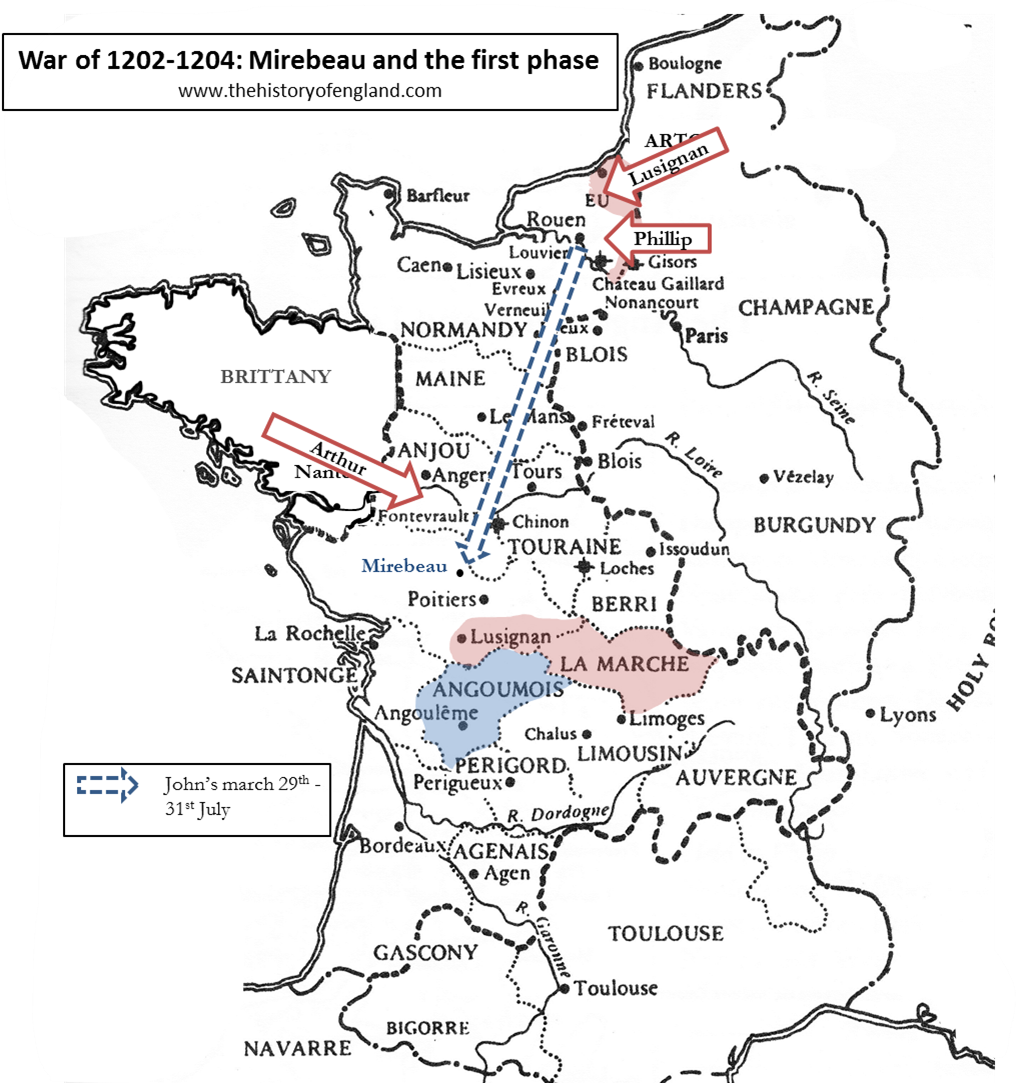 Phillip's plan in the war was not new – Athur to attack the centre of he empire along hte Loire valley, while Phillip distracted John in Normandy.

At first all went to plan; John's army was not ready, and Eleanor of Aquitaine was forced to flee ahead of Arthur's army, taking refuge in Mirebeau.

Hugh de Lusignan (Hugh le Brun) and Arthur beseiged Eleanor and were confident of capturing her in a few days.

John marched the 80 miles from Rouen to Mire beau in 2 days, picking up William des Roches and completely surprising Lusignan and Arthur at Mirebeau.

It was a complete victory. Arthur, the Lusignans and all their knights were captured and imprisoned. Here's John's letter home:

"Know that by the grace of God we are safe and well and God's mercy had worked wonderfully with us, for on Tuesday before the feast of St Peter ad Vincula, when we were on the road to Chinon, we heard that the lady our mother was closely besieged at Mirebeau, and we hurried there as fast as we could, arriving on the feast of St Peter ad Vincula. And there we captured Arthur, whom William de Briouze delivered to us, and Geoffrey de Lusignan, Hugh le Brun, Andrew de Chauvigni, the viscount of Chateleraut, Raymond Thouars, Savary de Mauleon, Hugh Bauge and all our other Poitevin enemies, and none escaped. Therefore God be paraised for our happy success"

If John had not managed to upset and lose the loyalty of William des Roches almost immediately, history could have been very different.  But he did. Arthur was sent to Rouen instead of being in des Roches's custody, and William rebelled, taking maine and Anjou with him.