Skip to content
You are here
Home > Anglo Saxons > Mercian Supremacy > 55 The History of Medieval Europe, Part I

From Charles Martel and the battle of Tours in 732, through Charlemagne and Otto the Great, the first installment concentrates on France, Germany and Italy and takes us to the shores of Gregory VIIth.

It is hotly debated as to whether or not Charles Martel’s victory over the Muslim armies in central France was the occasion that caused the Muslim tide to recede. Probably it’s not the cause but the event that marks it, but how ever you look at it the victory of probably 30,000 Franks over 75,000 previously unstoppable Muslim forces was hugely significant. Martel had prepared and trained his soldiers for this event, and his victory founded his dynasty – the Carolingian dynasty – which led to Charles the Great, Charlemagne.

The Empire of Charlemagne

Charlemagne’s Empire was a conscious attempt to re-create the glories of the Roman Empire of the west. Charlemagne put as much effort into reviving learning and spreading Christianity as he did into territorial expansion. None the less his Empire was huge, as the map shows (thanks to EB…).

Charlemagne was crowned as the Holy Roman Emperor by Pope Leo in 800. Charlemagne’s view of this event was very much that his servant, the Pope, was adding his support to his kingship. Pope Leo was trying to establish that Emperors only became Emperors when the Pope said so. This is an argument that will run and run.

Charlemagne becomes one of the touchstones of medieval Europe – just as he referred back to the Roman Empire,  so future kings would refer back to the glories of Charlemagne.

Otto the Great and the Holy Roman Empire

After Charlemagne, his empire splits into three (see the small inset box map in map above). France, under  Charles the Bald and his descendants, fragments under the pressure of Viking raids and communication into a series of semi-independant states. The French king concentrates on the development of his own power within the Ile de France, and maintaining some lip service to their legal supremacy over the rest of the Western Franks. In the end, it’s a strategy that pays handsome dividends under Phillip Augustus.

The Eastern Franks choose a different route. Otto the Great took up the mantle of Charlemagne, and fought to maintain a new Roman, and Holy Empire. He defeated the Magyars at Lechfeld in 955, and finally put an end to the chaos. He brought the warring leaders of the German ‘Stem Duchies under royal control. He chose a unique way of ruling this still huge and disparate empire. The Ottonian system relied on the church to be partners in ruling his empire. Prince Bishops would not try to establish dynasties, for example, to break away from the Empire. For over 100 years, Otto’s system works beautifully, and his Empire dominates Germany and much of Italy. But it relied on control of church appointments and control of the Popes. Local churchmen, by and large, were happy enough – the Pope was not. 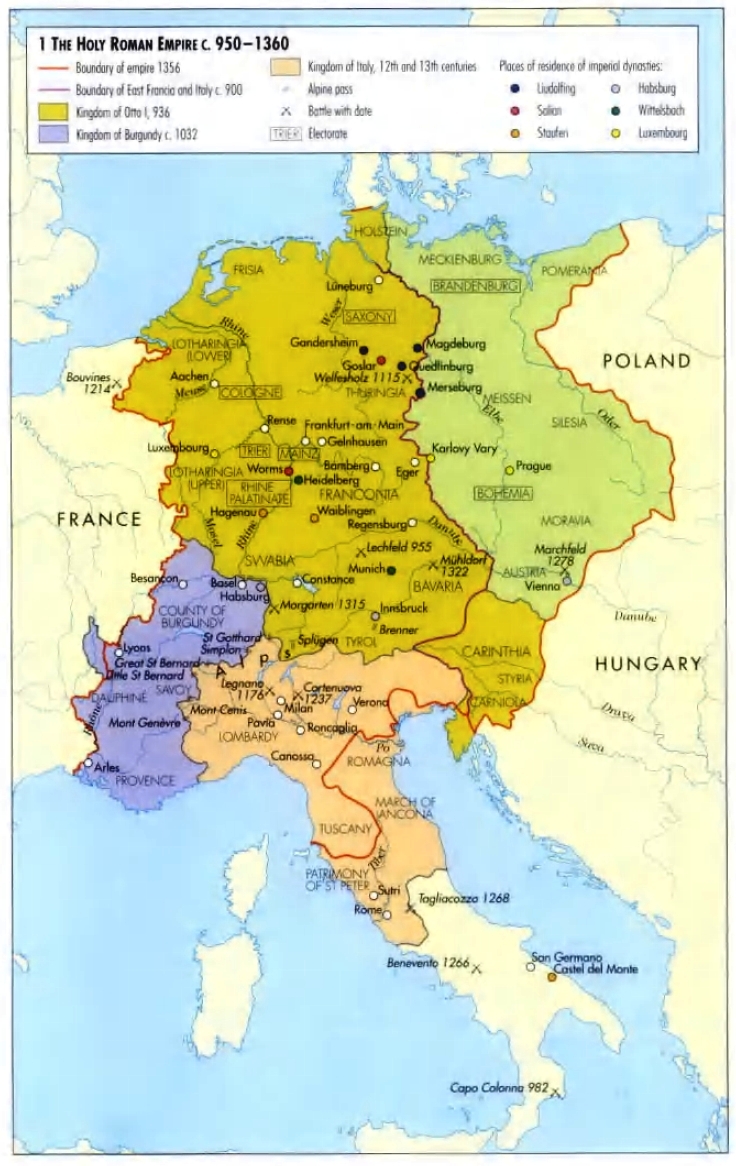 17 thoughts on “55 The History of Medieval Europe, Part I”