In 1258, the resentments all came together and the pot boiled over. The pope Alexander did his vassal no favours what so ever by pushing so hard that Henry had to ask his great men for more money.Together with some blazing rows between the Lusignans and the English barons, the spark had been applied to the powder keg. The result was the hobbling of the king by the Provisions of Oxford.

66 The Road to Revolution 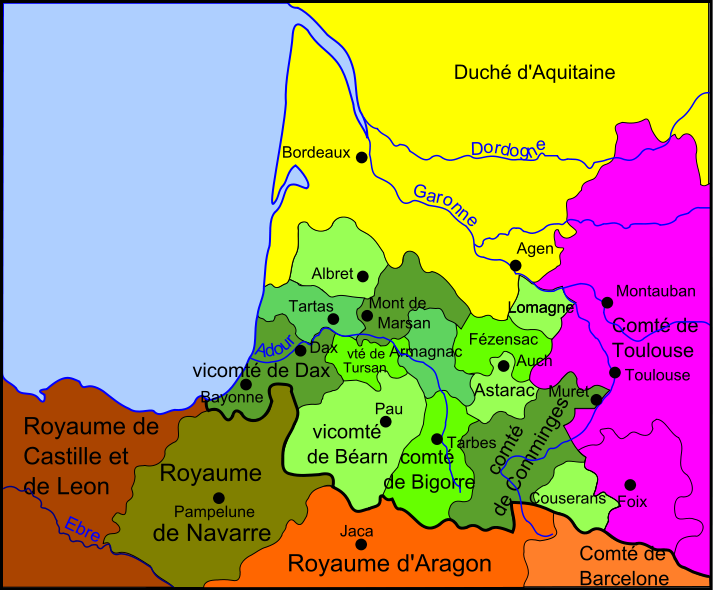 In 1248, the truce with France ended. So Henry had to get Gascony sorted out. There was little Ducal control, and one man in particular, Gaston de Bearn had a history of independence. You can see Bearn on the map to the south and centre. Meanwhile the Spanish kingdoms to the south – Aragorn, Castile, Navarre – all had claims and presented a threat.

Henry's solution was to turn to Simon De Montfort. It's difficult to decide whether de Montfort did a good or bad job – he was brutal and high handed, but he probably was bringing the locals to heel. Trouble was that it was all too much fuss and bother for Henry to deal with, lots of complaints from the locals, lots of expense.

So in 1252 de Montfort was basically put on trial in front of parliament. Things got nasty, and personal, between de Montfort and Henry. But the English Barons were on de Montfort's side. In the end, however, de Montfort was sacked, and Henry took over – with a remarkably successful campaign. It left a further fund of resentment.

Frederick Hohenstaufen (the Holy Roman Emperor) and the Papcy didn't get on. So when Frederick died leaving a young sone, the Papacy wanted to make sure no Hohenstaufen inherited the Kingdom of Sicily, part of the Emperor's dominions or a Papal fief, depending who's side you were on.

So the Pope offered Sicily to Henry's younger son Edmund. Oh, along with the price tag of 135,000 marks, since the Pope needed to go and capture it from Frederick's illegitimate son, Manfred.

Whether or not it was possible – and some historians argue it wasn't as daft as it seems, and actually something similar did happen in the end – Henry did not involve his barons, did not have the money; the the Pope's aggressive and hectoring attitude to Henry put him in a politically very difficult decision. It forced hin in 1258 to ask his great council for money when he'd really rarher not have had to.

Revolution and the Provisions of Oxford

In April 1258 7 magnates cornered Henry at Westminister and told him he wasn't up to it. He needed to appoint a council of 24 to manage and reform the kingdom, and he needed to get rid of the Poitevins. Henry bravely caved in, and thus the monarchy suffered it's greatest loss of power in a simple stroke.

In June 1258, the Great Council, or Parliament as it was being called since 1236, met at Oxford. A muster for a Welsh campaign was happening the follwing week at Chester, so a large number of lesser Barons and knights came along too. So the meeting was a much more socially diverse group, and much more radical than might be expected.

A series of thoughts and agreements came from the parliament, which we call the Provisions of Oxford, which would be develop later into the Provisions of Westminister. They are a dramatic and radical remodelling of the nature of kingship in England. The main points were:

If you want to see the Provisions of Oxford in full, here they are, with many thanks to Kim for her help. There is a lot of oathtaking!

3 thoughts on “66 The Road to Revolution”