Wool was the wealth of England, the great trade that brought wealth and prosperity to England. The people who really made the money were the big ticket Italian Merchants. This week we also look at the life of Magnates, the super-rich during the period, and their households.

By the way, I have a page with some basic data from medieval times – so click here if you want to look at population, prices and other economic data.

Just as the 13th C saw a continued growth of towns, so trade grew – to a value of about £500,000 by the end of the century. By and large, England was an exporter of raw materials, and an importer of finished products, or Agricultural products we could grown ourselves. Here are a few of the the things we exported:

But the big one was Wool; it generated something like half of England's external trade at this time.
The size of our exports varied –  reaching a height of 46,000 sacks. You might wonder what a sack of wool looks like 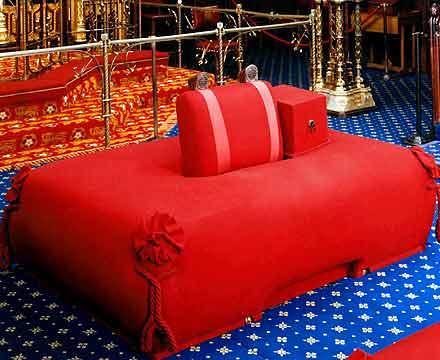 – and if so, look no further than the Woolsack, which, slightly oddly, the Lord Chancellor chooses to sit on in the House of Lords.Those 46,000 sacks of wool were produced by something like 10 million sheep.

The trade was driven by the relationship with one of the two economic powerhouses of Europe – Flanders. Just across the channel, Flanders had the largest concentration of towns and cloth producing industry outside of North Italy, and our closeness to this key market gave us the edge. Although the wool we produced was not as fine as Spain's Merino, is was softer, and easier to felt – and so therefore cheaper to manufacture.

If you want to know more about the wool trade and industry, then here's a series of Ford lectures produced by the  Economic Historian Eileen Powers.

The merchants who dominated this trade were initially not English. The biggest firms were Italian – names like the Riccardi, the Frescobaldi, Peruzzi and the Bardi dominated the English scene. They dominated because of their access to markets, but also their unique way of joing together, giving them access to capital that the English Merchant couldn't compete with. Often, they would work with English merchants, who would gather wool from their hinterland, and sell to the large exporters at local fairs. But increasingly, Italian merchants went straight to the biggest producers – the Cistercian  monasteries like Fountains or Rievaulx. They would buy up several years of crop in advance – the merchant got a great price (maybe as low as £4 a sack, which they could sell for £8), but took the risk that prices would fall; the Abbey got les for their crop, but got their money in advance, and the security that brought.

By the time of Edward I, the Italian houses were also lending serious amounts of money to the English crown – to their eventual downfall.

Nicholas of Ludlow and Stokesay Castle

Not all successful merchants were foreign; and over time, and certainly by the early 14th Century the picture had reversed, and English Merchants controlled the majority of the English trade.

An example is Nicholas of Ludlow, and his son Laurence, who became the richest merchants of their time. Laurence was enormously rich – lending for example, £4,000 to one baron in a single transaction. He became an adviser to Edward I on commerce, which to the fury of other merchants resulted in Edward tripling the customs duty on wool to £2 per sack. Laurence had the typical life of a Merchant – we know that he travelled the English fairs such as Boston, but also the great French fairs of Champagne. He sold to the cloth

merhcants of the Low Countries such as Ghent, Bruges and Types. In 1291, he set off on a normal voyage, carrying in his ship 189 sacks of wool, each worth about £7 and containing 250 fleeces. Unfortunately, but much to the glee of his competitors, he was shipwrecked and drowned.

In 1280s, Laurence had bought into the landowning classes, in a model that will be recognisable for  many hundreds of years of English history.

They built the rather exquisite Stokesay Castle in Shropshire in the Welsh Marches, which would more formally be called a fortified manor house. It was strong enough to resist a casual attempt at banditry from robbers or the Welsh, but not strong enough to resist a proper siege – there are lovely big windows that give direct access to the main hall, for example, that you could drive a wagon through.

But it is also, in fact, a rather exquisite building, and hopefully you'll see from these pictures, or if not by going to the History of England Facebook page.

7 thoughts on “69 Merchants and trivial stuff about Magnates”