Things looked pretty good for the reformers in 1259; but at the heart of the reform movement were fault lines that weakened them, and made them vulnerable. The differing aims of the magnates; the avarice of de Montfort; and the fact that would plague the civil war 400 years later – how ever many times they defeated the king, he would still be the king. And in 1261, the royal fight back began

72 The Empire Strikes Back 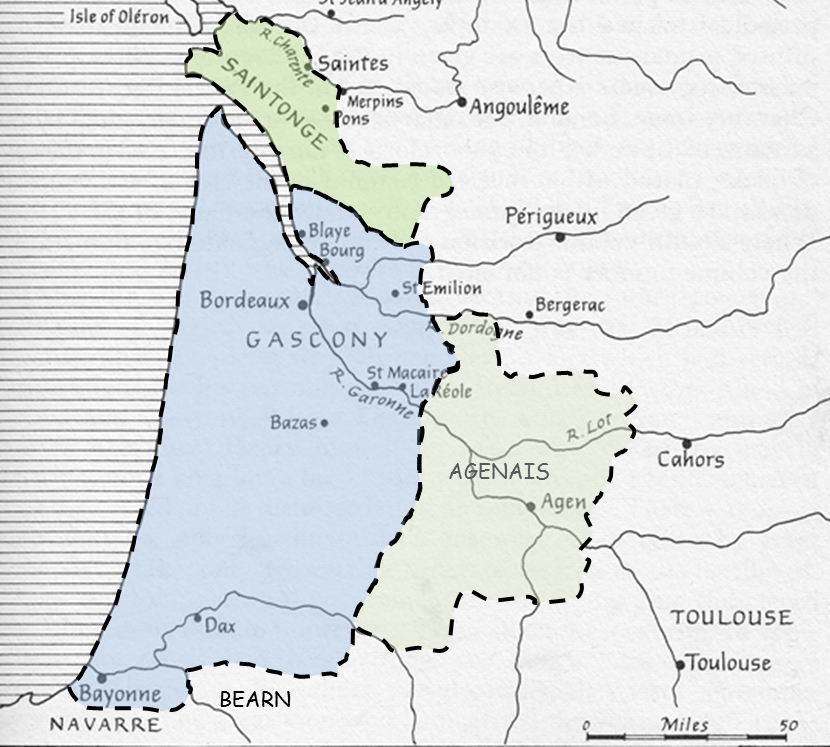 When at last de Montfort was out manoeuvred into giving Eleanor's quitclaim, the treaty was signed that finally put the seal on the end of the Angevin Empire. Normandy, Anjou, Maine, Touraine, Poitou – Henry formally renounced his claim to all of them. In return, he was given Gascony, and the rights to some further bits of land not yet in his possession – the Agenais, the Saintonge. Some commentators thought Henry a prune to have agreed to this – Eleanor had held Gascony as of right, not from the king of France. But in fact, Henry for once was probably right. It was a running sore – an agreement needed to be reached, otherwise there would simply be constant war, which the English were unlikely to win. And in fact although it taes a long time of course, a war which the English were indeed eventually to lose.

The Provisions of Westminster

First of all, this is only the second example we have of specific legislation being introduced to modify the behaviour of the king and his instruments, the Sherrifs and Justices in Eyre. It goes further than Magna Carta in this respect.

Secondly, Magna Carta is really a peace treaty between the king and his magnates. The Provisions of Westminster concerned the malpractices of the barons every bit as much as of the king. This is radical. It also reflected the changing make up of England – local knights and towns were now too important and influential to be represented by the magnates.

If you add the extraordinary restriction of the king's powers brought through the Provisions of Oxford, you have a constitutional change unmatched anywhere in Europe.

For those super-keenies, here is the text of the Provisions of Westminster.

The Empire Strikes Back

In 1260, Henry and Eleanor started a series of challenges to the Baronial Council which meant that by the end of 1261 they were back in control. At one stage, Simon de Montfort was put on trial by the king, and only saved by an  invasion from Llewellyn ap Gruffudd which distracted Henry at the crucial time – or maybe saved him from the embarassment of an acquittal. Prince Edward returned to the royal fold, reconciled to the king and Queen – though having to abandon his marcher friends in the process, much to their resentment. Eventually, in October 1261 after having many times sworn to uphold the Provisions of Oxford, Henry produced a Papal bull of absolution from his oaths, and repudiated the provisions. This of course should have been the time when the magnates stood up to be counted – but they failed, the air knocked out of them by the defection of Richard de Clare, the Earl of Gloucester. Only Simon de Montfort stood firm – making off to France rather than be forced to take part in a government that now was not regulated by the provisions.

3 thoughts on “72 The Empire Strikes Back”