In 1264 when De Montfort set out from London he would have been conscious that this was a last throw; after losses to the Royalists in the midlands his only chance was a decisive victory. Lewes gave him that victory, and opened a remarkable period in England's history, a period of constitutional monarchy.

74 The Wheel of Fortune

De Montfort led an army that was considerable smaller than the King. Estimates vary wildly, but lets go for 10,000 on the Royalist side and 5,000 with de Montfort. In addition, de Montfort had far fewer cavalry – though in the end given the terrain and the  activities of Edward, maybe that wasn't such a bad thing.

The map below by David Carpenter gives a good idea of the events of the day; you can also find out more at the Sussex Archaeological Society website. 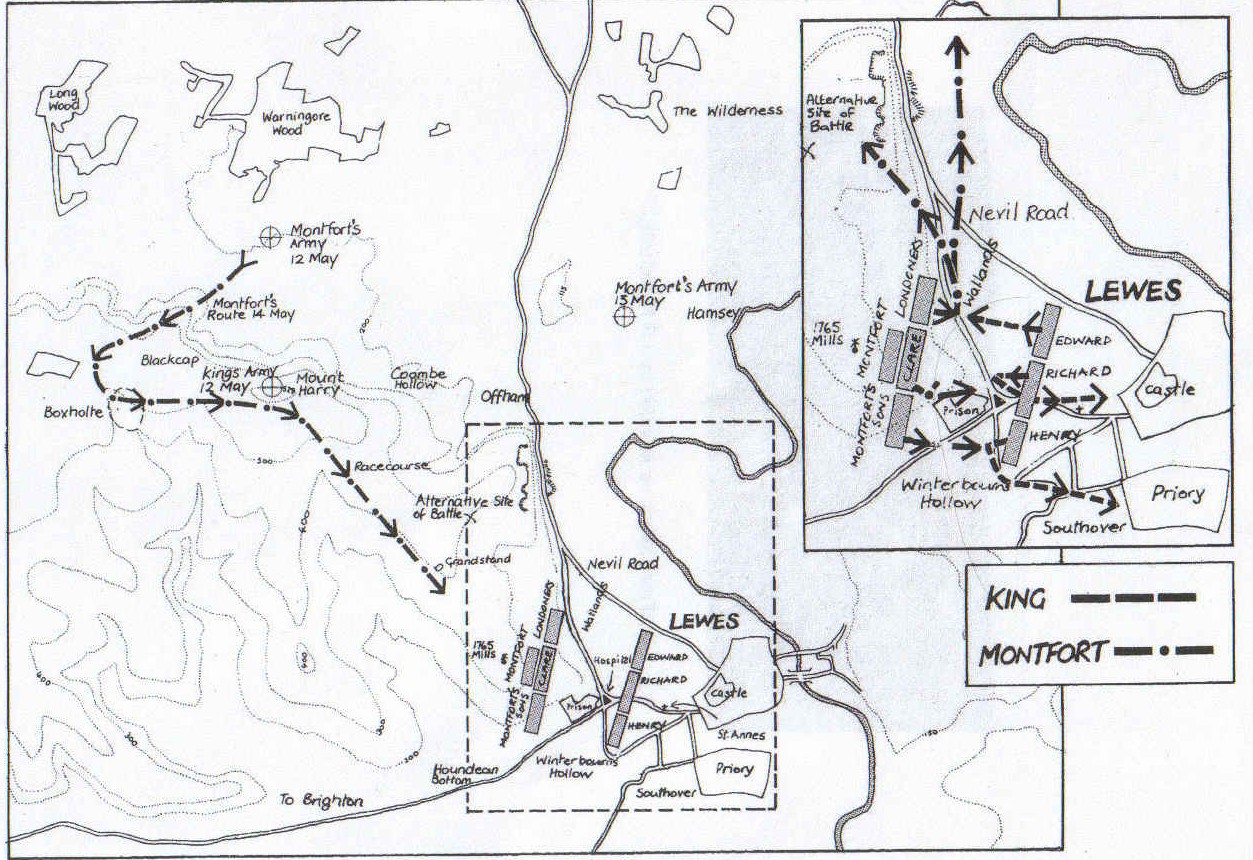 Below is the account of the battle of Lewes by the reliable chronicler William of Rishanger:

Earl Simon passed that night without sleep, giving time, as was his habit, to divine offices and prayers and exhorting his men to make sincere confessions. Walter de Cantilupe, Bishop of Worcester, absolved them all, and commanded that for the remission of their sins they should manfully strive for justice on that day, promising to all who should die thus the entry into the heavenly kingdom.

Battle being therefore certain, at daybreak before the rising of the sun, they went out from the village of Fletching, where a great part of them had spent the night, and which was about ten miles from Lewes. Before the start earl Simon de Montfort girt Gilbert de Clare with a knight's sword.

When they had marched near the town of Lewes and were hardly two miles distant from it, Simon with his men ascended a hill and placed his chariot there in the middle of his baggage, and having purposely placed and firmly erected his standard upon it, he encircled it with many armed men. Then with his own forces he held the ground on either side and awaited the issue of events. In the chariot he set four London citizens, who a little before, when he passed the night in Southwark, had conspired to betray him. This he did as a warning.

When he had thus prudently arrayed his forces, he ordered white crosses to be sewn on their backs and breasts over their armour, so that they should be distinguished from their enemies, and to indicate that they were fighting for justice. At dawn the baronial army suddenly attacked the king's guards who had gone out to seek for food or fodder and killed many of them.

When the king therefore was sure of the coming of the barons, he soon advanced with his men, with his standards unfurled and preceded by the royal banner, portending the judgment of death, which they call the 'Dragon'. His army was divided into three parts: the first line was commanded by Edward, the king's eldest son, together with William de Valance, earl of Pembroke, and John de Warenne, earl of Surrey and Sussex; the second by the king of Germany with his son Henry; and the third by king Henry himself. The baronial forces were divided into four, of which the first line was given to Henry de Montfort, the second to Gilbert de Clare together with John FitzJohn, and William of Montchensy; in the third were the Londoners under Nicholas Segrave; while the earl himself with Thomas of Pelveston led the fourth.

Then Edward with his line rushed on his enemies with such violence that he compelled them to retreat, and many of them, to the number of sixty knights, it is said, were overwhelmed. Soon the Londoners were routed, for Edward thirsted for their blood because they had insulted his mother, and he chased them for four miles, slaughtering them most grievously. But through his absence the strength of the royalists was considerably diminished.

Meanwhile many of the mighty men of the royal army, seeing the earl's standard on the hill and thinking he was there, made their way thither and unexpectedly slew those London citizens, for they did not know that they were on their own side. In the meantime the earl and Gilbert de Clare were by no means inactive, for they smote, threw down and killed those who opposed them, endeavouring with the utmost eagerness to take the king alive. Therefore many of the king's supporters rushed together – John earl of Warenne, William de Valance, Guy de Lusignan, all the king's half brothers, Hugh Bigod and about three hundred warriors – and seeing the fierceness of the barons, fled. There were captured Richard, the king of Germany, Robert Bruce and John Comyn, who had led the Scots thither. Also King Henry had his horse wounded under him, and giving himself up to earl Simon was soon brought under guard to the priory.

There were killed on that day many Scottish barons, and a great number of the foot soldiers who came with them had their throats cut. Meanwhile Humphrey de Bohun earl of Hereford, John FitzAlan earl of Arundel, William Bardolf, Robert de Tateshale, Roger de Somery, Henry Percy and Philip Basset were taken prisoner.

But on the king's side there fell the justiciar, William of Wilton and Fulk FitzWarin, the one slain by a sword, the other drowned in the river. On the barons' side fell Ralph Haringod, baron, and William Blund the earl's standard bearer. On both sides five thousand are said to have fallen.

When Edward and those fighting with him returned from the slaughter of the Londoners, not knowing what had happened to his father, he went round the town and came to Lewes castle. When he did not find his father there, he went to Lewes priory, where he found his father and learned what had happened. Meanwhile the barons made an assault on the castle, but as those shut up in it defended themselves manfully, the barons withdrew. When Edward saw their boldness within the castle, he was greatly inspirited, and collecting his men again, he wished to continue the battle afresh. Discovering this, the barons sent arbitrators of peace, promising that they wished to treat for an effectual peace the next day.

Richard the Trichard and the song of Lewes

Here, rarely, is the voice of ordinary people, mocking the King of the Romans, Richard of Cornwall as he hid in his windmill after the battle.

The Song of Lewes, on the other hand, is a remarkable political track, probably by a Franciscan Friar, that puts the case for kingship and hte baronial cause.

The Mise of Lewes

By the end of the battle, Simon was victorious and the agreement called the Mise of Lewes transferred the King and Prince Edward from the Priory at Lewes to imprisonment with de Montfort. It also committed de Montfort to arbitration to find an acceptable alternative to the Provisions of Oxford.

The English Bishops and the failure of arbitration

Louis IXth though was not playing ball. The English Bishops tried their best, crossing to France to try to negotiate. There, the Papal Legate Ottobueno did his best to browbeat them into abandoning de Montfort, but to no avail. Incredulous and exasperated, the Legate asked them a straight question, to which he would have got the answer 'no' in every other European country - Did the bishops agree with the barons that the king of England should be compelled to accept specified councillors and strictly to follow their counsel? The bishops looked him in the eye and said 'yes'. The result was excommunication and interdict for de Montfort and de Clare. The men of Kent showed their attitude – when the bishops arrived with the papal bulls, they tore them into pieces and threw them into the sea.

The 'pride and arrogance of Lucifer'

The short period of rule by de Montfort was too troubled to give much chance for reform; though true to the Provisions, De Montfort called parliament regularly, including the first parliament where burgesses were called to represent the towns; and he appointed sheriffs according to the provisions.

But on the other hand, de Montfort and his family ruthlessly and systematically built their wealth and land, so much so that at tournaments the de Montfort boys were ‘abounding in money and with and with an innumerable company of paid knights’.

The result was to drive de Clare from the baronial camp, disillusioned at the growth in de Montfort's power and the eclipse of his own., By April 1265 he had left court and gone to this estates in the Welsh marches, where de Montfort was forced to follow to try to repair the fences.