In 1305 two Scottish lords had a fall out next to the altar of a church in Dumfries. One them, Robert Bruce, resolved the argument by sticking a knife in the other, John the Red Comyn. Robert then raised the standard of rebellion and with the support of Robert Wishart, and the Scottish war was back on. Two years later, campaigning in Scotland, Edward finally reached the end of his death. Hate him or loathe him, Edward can at least say that no-one could ignore him. And there is something relentless about his tomb and inscription that sums up the man.

The tomb of Edward I 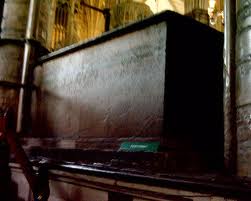 The tomb of Edward I is really rather remarkable edifice. It is surrounded in Westminster Abbey by gorgeous gilt tombs and shrines; the Shrine of Edward the Confessor for example is a gilded monstrosity, nearby Henry III's tomb is less grand but certainly covered in gilt. Edward I gets an almost unmarked black granite block, with no effigy. It has been said that the reason was that the feckless Edward II couldn't be bothered to tart it up, but that's very doubtful. And when you look at it, perched high above the ambulatory, it's somehow entirely appropriate. Here lay a man of substance, an implacable opponent.

All of which is reinforced by the inscription:

Now the inscription you see was actually  put onto the tomb in the 16th century but it's entirely possible it reflected an inscription of the time. Here was edward grimly telling his folk to remember the feast of swans, and their vow to avenge the death of John Comyn.