This week, and introduction to Edward II, quite probably the most reviled king in English history. So this week he have a bit of a survey of how history has treated the lad, and the chroniclers that have given him his reputation. And then we kick of the reign.

87 Scandal was brought upon the Kingdom 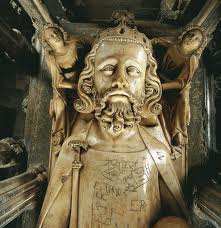 This extract from the contemporary chronicler has formed the basis of opinion for many other contemporaries. I've taken it from Seymour Phillip's book 'Edward II'.

King Edward was a man handsome in body and of outstanding strength, but, if common opinion is to be believed, most inconsistent in behaviour. For shunning the company of the nobles, to sought the society of jesters, singers, actors, carriage drivers, diggers, oarsmen, sailors and the practitioners of other kinds of mechanical arts. He indulged in drink, betrayed confidences lightly, struck out at those standing near him for little reason and followed the counsel of others rather than his own. He was extravagant in his gifts, splendid in entertainment, ready in speech but inconsistent in action. He was unlucky against his enemies, violent with members of his own household, and ardently attached to one of his familiars, whom he sustained above all, enriched, preferred and honoured. From this obsession opprobrium came upon the lover and obloquy to the loved one; scandal was brought upon the people, and the kingdom was damaged. He also promoted unworthy and incapable men to office in the church, a practice which was to be a beam in his eyes and a lance in his side. In his days there was also to be a dearth of grain and constant mortality among farm animals, such as had scarcely been seen before.

Then there's a quite amazing blog, Edward II by Kathryn Warner. Slightly chippy it must be said, but brilliantly written, incredibly comprehensive and easy to find whatever information you want. The best history blog I have come across by some distance.

5 thoughts on “87 Scandal was brought upon the Kingdom”