With the fall of Lancaster, the Despencers were off the leash, and able to vent the full force of their avarice on England. Their power and Edward's inability to control them even came between the king and Isabella – so that after a diplomatic mission to France Isabella refused to return. And then in 1326, she landed in England with 1,500 men and her rebel lover, Roger Mortimer.

93 The Wages of Tyranny 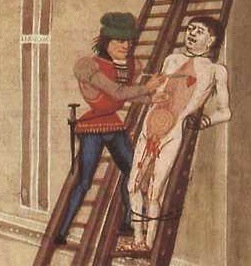 Edward and Hugh Despencer fled to despencer's power base, the Welsh marches. But even there, they could find no support.  they were eventually captured trying to get back to Despencers powerful fortress at Caerphilly. Despencer was given the same treatment Edward had given Lancaster – refused the chance to speak in his defence, and hanged, drawn and quartered.