Edward had little intention of keeping the truce for long. After a brief period of reconstruction, he repudiated the truce a year early. And so enters one of the most attractive figures of the hundred years war – Henry of Grosmont, the Earl of Derby, the Earl of Lancaster. His campaign in 1345 finally proves that the English can win.

Henry of Grosmont and the campaign of 1345

Henry of Grosmont was the son of the earl of Lancaster, antagonist of Isabella and Mortimer. He's born in 1310, and from 1337 he was known as the Earl of Derby. On his father's death in 1345 he became the Earl of Lancaster.  I could write a biography about him, but I don't have much time available…and anyway, Kathryn Warner has already done so on her blog. So to read more about a genuinely fascinating and attractive man, go to Kathryn's blog.

Edward dismissed the papal negotiators and repudiated the truce in early 1345. He had a plan. He would attack into northern France, Billy Bohun would take a small army to Brittany, and Henry of Grosmont would lead a campaign in the south west. French intelligence was good – so they concentrated on the north. Unfortunately for them, English inefficiency sold them a dummy – Edward would not sail until 1346, and meanwhile Henry of Lancaster (let's call him that, it's easier) had a free hand.

A change of strategy

One of the great contributions Lancaster made was in changing the way the English thought about strategy in the south west. Medieval warfare was often a painstaking business of taking castles one by one. This was the Seneschal's strategy. Lancaster changed all that. He favoured the chevaucee, quick, fast movements attacking into the heart of French lands before they could concentrate their forces.

Lancaster marched day and night and appeared before the walls of Bergerac before the French knew he was on the way. Before hte end of the day, Bergerac had fallen. After a delay to gather his forces, Lancaster marched on to Perigueux, and settled down to starve them out. 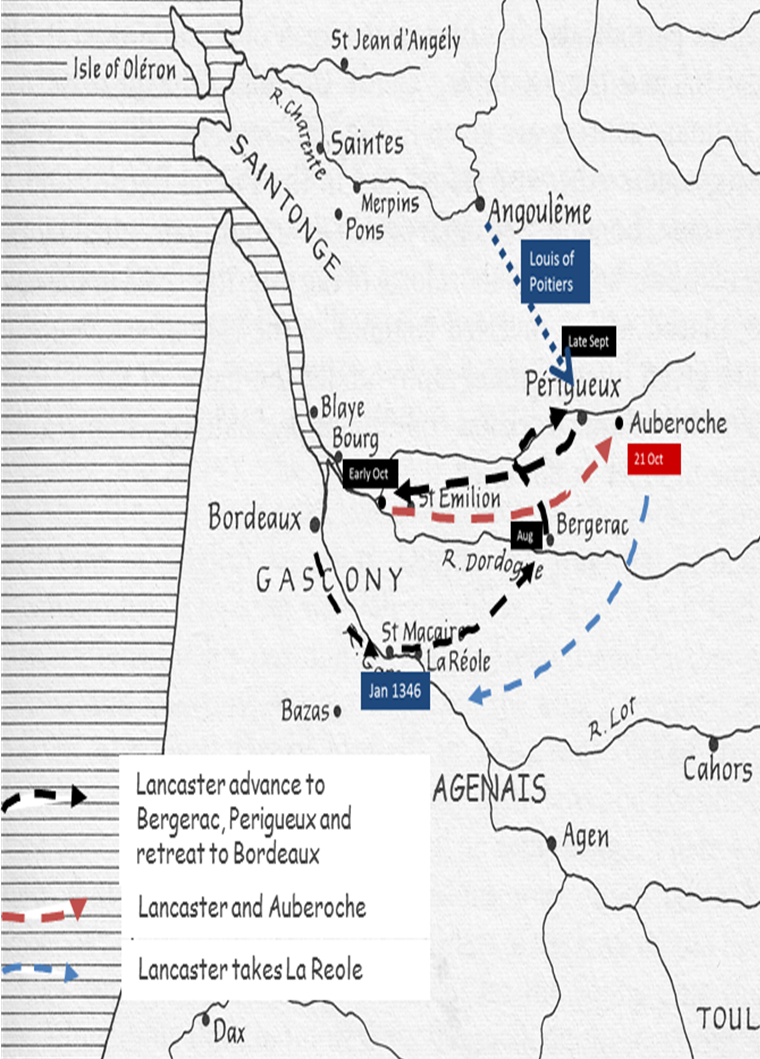 The Duke of Normandy finally gathered enough forces to respond, and his captain Louis of Poitiers drove Lancaster away. Lancaster withdrew to Bordeaux, leaving garrisons in the area. Louis, however, was determined to leave no base for future English operations. He laid siege to Auberoche, and it's English castellan Alexdandre de Caumont.

Lancaster responded with another lightening quick march with Walter Manny and 1,200 men at arms to Auberoche, hoping to shore up the defences until the Earl of Pembroke, with the main army could arrive.

Lancaster and Manny watched the French from the woods as they watched Auberoche, relaxed and confident in the knowledge that their forces were way superior and no English were near. It was clear that Pembroke would not arrive soon.

In the encounter that followed, English Aarchers, cavalry and the advantage of a surprise attack combined to win for Lancaster a victory of 1,200 men over 7,000. In the end, a sortie by Caumont into the rear of the French broke them, and Lancaster had won a magnificent vistory.

The reward was the town and castle of La Reole. The French were in no position to stop Lancaster as he marched south and with the help of the townspeople, took the castle in Janaury 1346.

2 thoughts on “104 Lancaster and the Battle of Auberoche”