In 1348 a 14 year old royal princess, Joan, set out from Portsmouth to marry Pedro of Castile. Her route went by Bordeaux, and with the massive trousseau she carried – enough to fill an entire ship – she would have expected a comfortable journey. But Joan never arrived.

I think there has been so much written about the Black Death that I am not going to repeat it all here. As ever, Wikipedia is as good an account as any, so go the the Black Death page.

The most famous descriptions of the plague come from Italy. Below is a quote that famously communicates a little part of its horror.

The mortality in Siena began in May. It was a cruel and horrible thing. . . . It seemed that almost everyone became stupefied seeing the pain. It is impossible for the human tongue to recount the awful truth. … Father abandoned child, wife husband, one brother another; for this illness seemed to strike through breath and sight. And so they died. None could be found to bury the dead for money or friendship. And as soon as ditches were filled, more were dug. I, Agnolo di Tura called the Fat buried my five children with my own hands. . . . And so many died that all believed it was the end of the world 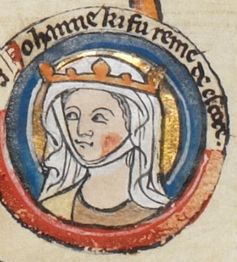 "…your Magnificence knows how…we sent our…daughter to Bordeaux, en route for your territories in Spain. But see, with what intense bitterness of heart we have to tell you this, destructive Death (who seizes young and old alike, sparing no one and reducing rich and poor to the same level) has lamentably snatched from both of us our dearest daughter, whom we loved best of all, as her virtues demanded"

"No fellow human being could be surprised if we were inwardly desolated by the sting of this bitter grief, for we are humans too. But we, who have placed our trust in God and our Life between his hands, where he has held it closely through many great dangers, we give thanks to him that one of our own family, free of all stain, whom we have loved with our life, has been sent ahead to Heaven to reign among the choirs of virgins, where she can gladly intercede for our offenses before God Himself"