With John Wycliffe and the Lollards in the 14th century, heresy finally came to England. Up to this point, rural England had been notable for avoiding the religious turmoils that sprung up from time to time through the continent. 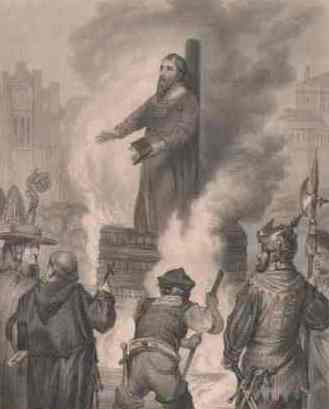 William Sawtry was very probably the first person in England executed for heresy by being burned., He was not to be the last.

William Sawtry was a parish chaplain in Norfolk. He was a vigorous preacher, spreading an unusual message; he declared that he would rather venerate a living monarch, or the bodies of the saints, or a confessed and contrite man, than any crucifix; that priests should preach or teach rather than say canonical services; and that money used for pilgrimages would be better spent on the poor. Most significantly, he also held that real bread remained on the altar after the words of consecration – not the body of Christ.

Initially, Sawtry was taken in 1399 to the presence of Bishop Henry Dispencer, the Bishop of Norwich who had dealt so firmly with the Peasants revolt. He started off defiantly, but a few weeks later he was persuaded to abandon these beliefs, and he abjured them publicly at Lynn, swearing never again to preach or hold them.

Sawtry then moved to London, and despite his promises not to preach his heretical views any more, that is exactly what he did. So in 1401, he was hauled before a full convocation of the church at St Pauls in front of no lesser person than Archbishop Arundel. What followed was typical; Arundel questioned him closely and aggressively, trying to trick Sawtry into admitting his heresy. Sawtry responded with clever evasions and replies that could be interpreted several ways. For several hours Sawtry avoided answers that could incriminate him, but Arundel was relentless pushing him harder and harder for hour after hour.

Eventually, Sawtry could avoid him no longer; following ther consecration, he said the bread at the altar, quote ‘remained true bread, and the same bread as before’.

Arundel had won – he had his man. William Sawtry was convicted as a heretic. He made no plea for mercy. Instead he loudly prophesied imminent ruin for clergy, king, and kingdom. On 26 February he was ceremonially stripped of his priestly orders before a large congregation at St Paul's, to whom the archbishop expounded the condemned man's offences in English. He was then handed over as a layman to the secular powers. His execution was authorized by direct royal command, because there was no formal law, and and soon afterwards burned at Smithfield, quote

‘bound, standing upright, to a post set in a barrel with blazing wood all around, and thus reduced to ashes’

The Lollards had their first martyr. Sawtry was reviled by orthodox chroniclers but honoured by his underground co-religionists: one such, William Emayn of Bristol, in 1429 called Sawtre ‘a holy man … worshipped in heaven’, and he later figured prominently in Foxe's protestant book of martyrs.