Henry Vth is a man who has a reasonable claim to be the greatest of English kings. But what did contemporaries think of him? Successful he was no doubt – but in his rigid piety and ruthlessness was he also a monster? 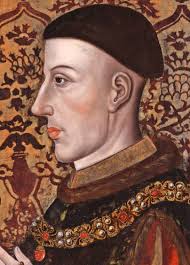 We have arrived at one of the most famous rulers of England. Who inspired one of the most famous and talented of historians, K B McFarlane to describe him, remarkably immoderately, as "the greatest man that ever ruled England". Historians ever since have been picking away at that, because historians do so hate brave and definitive statements. And so the revisionist view goes all the way to Ian Mortimer, who as a historian is also not afraid of brave and definitive statements. So Ian basically describes Henry as a Monster. A monster "undermined by his own pride and over whelmed by his own authority’; a "wanton destroyer of lives’ and proof that "a man may be a hero and yet a monster".

But maybe the main thing is that to contemporaries, both English and French, Henry was the model of kingship. Even to the French he looked better than their own lot.