In 1459 the trigger point was finally reached; after a year of phony war, both sides preparing for war, the call for a great council in 1459 proving the trigger point. By the end of 1459 the fortune of one of the two sides would lie in ruins.

167 The Triumph of Lancaster 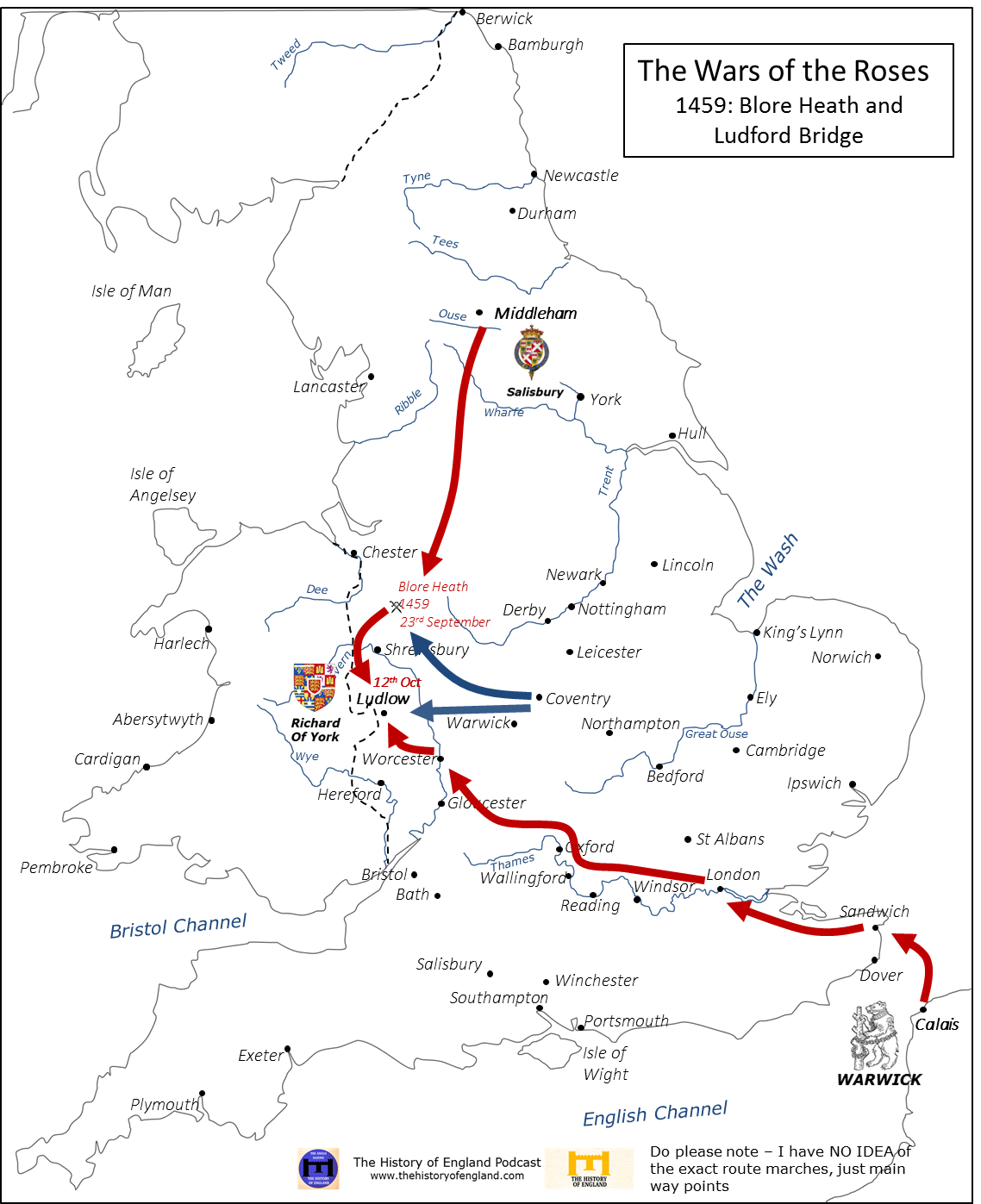 Between 1457 and 1457 Warwick was in his element as Captain of Calais. He solved the problem of feeding and paying his men by frankly turning to piracy. But with his raids on Italian merchants at Tilbury docks, on a fleet of 28 Spanish ships, on a merchant of Lubeck, Warwick was playing to the xenophobia and patriotism of the London Gallery. And the gallery loved it.

Through 1459 both sides spoke of peace and prepared for war. When the Queen ordered Warwick, Salisbury and York to a

great council, it was the end – they knew the council would not be a happy time for them. Salisbury was at Middleham in Yorkshire; York was at Ludlow on the Welsh border; Warwick at Calais. The signal came from Warwick landing in Kent, and making his way towards Wales. Salisbury came south, while the Queen charged Audley to cut Salisbury off before he could reach Ludlow and York. In this he suceeded.

The two armies faced each other on opposing ridges, with a stream between. Audley with 10,000 men and Salisbury with 5,000, neither keen to attack through the boggy ground and up the hill in the teeth of the inevitable arrow storm. Salisbury feigned a retreat – Audley fell for it and attacked. The result was a disaster for Lancaster, with Audley left dead on the field along with 2,000 others, and Salisbury free to continue to Ludlow.

At Worcester cathedral, Warwick, Salisbury and York swore to fight together and protect each other to the end. On 10th October from Ludlow, with Cecily Neville and York's family the 3 wrote a letter to the King professing their loyalty. O

n 12th October the royal army appeared on the other side of the bridge that defended Ludlow – Ludford Bridge.

The royal army was enormous. on the night of 12th October, Andrew Trollope and 400 men of Calais deserted to the King's army. On the morning of the 13th, the Yorkist army found their leaders fled – York and his son Edmund of Rutland to Ireland, Warwick, Salisbury and York's eldest son and heir Edward Earl of March to North Devon, thence to Guernsey and finally to Calais. The Yorkist cause lay in ruins.