After the victory at Northampton and the Act of Accord, it looked as though all Richard of York had to do was wait or the crown to be his. But in the north and west, the Lancastrian opposition was growing. 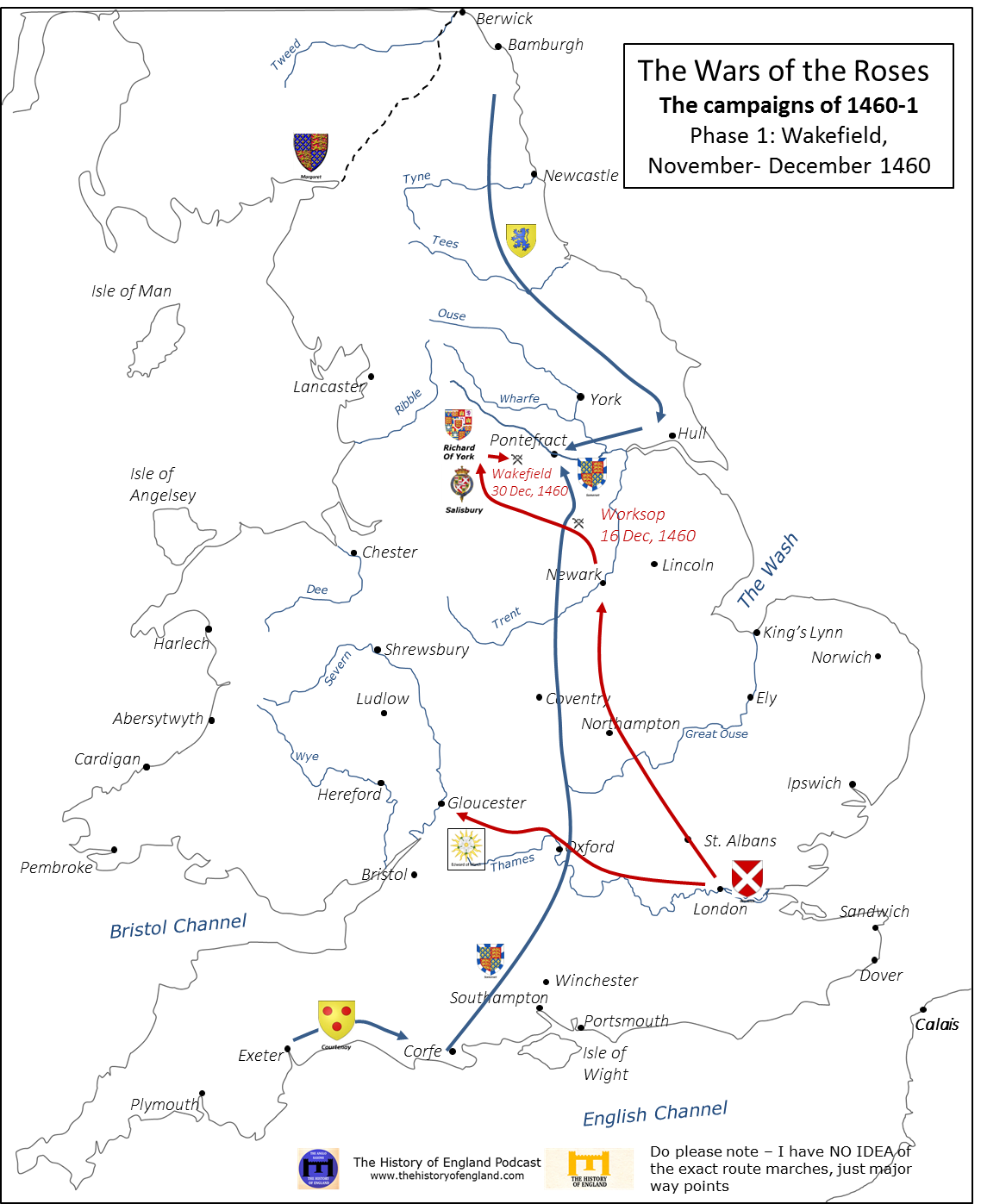 Just to help you follow all the wandering around, here are 3 maps which give you an idea of the what goes on in the fights and struggles of this episode.

While Queen Margaret fled to Scotland to arrange a deal with Mary of Guelders, Lancastrian supporters were ordered to gather at Hull. The Yorkists split up – Warwick stayed in London, Edward Earl of March was sent to the West to deal with Jasper Tudor, and Salisbury and York went to the north. On 30th December, York and Salisbury met Somerset in Battle outside their castle of Sandal, and the result was a crushing defeat. Reputedly, as York was captured the Lancastrians in the battle:

…stood him [York ] on a little anthill and placed on his head, as if a crown, a vile garland made of reeds, just as the Jews did to the Lord, and bent the knee to him, saying in jest, 'Hail King, without rule. Hail King, without ancestry, Hail leader and prince, with almost no subjects or possessions'. And having said this and various other shameful and dishonourable things to him, at last they cut off his head.

Certainly the heads of York and Salisbury found themselves pinned to Micklegate Bar in York when Queen Margaret arrived from Scotland, with Scottish troops and a treaty with Scotland – support at the price of the fortresses of Roxborough and Berwick. 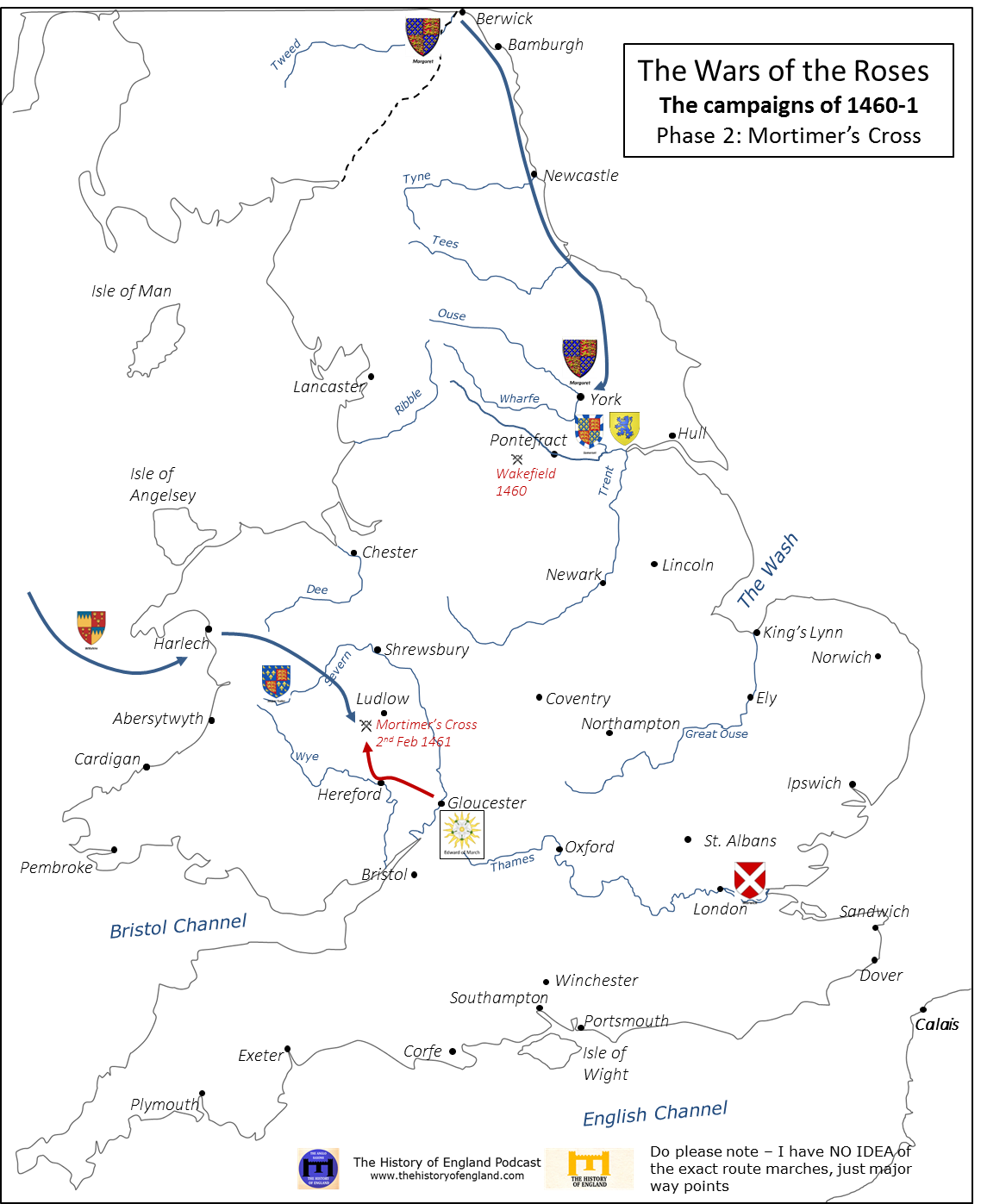 There was better news for the Yorkists in the West. The Earl of Wiltshire with troops from his Irish estates joined with Jasper
Tudor, and together they marched towards Hereford, intending to meet with the Queen as she marched south to London. Edward of March had started towards London to join with Warwick when he'd heard of the defeat at Wakefield; but instead turned north to head off Tudor and Wiltshire. His victory at Mortimer;s Cross gave the Yorkists hope, and established Edward's reputation as a warrior and commander. Edward turned to march east to London.

Margaret, Somerset, the Lancastrian lords and the Scottish troops burned and ravaged their way south. Their reputation went before them, and the brutality of the army did the Lancastrian cause great damage. Warwick gathered a fresh army, with loans from the City of London, and Burgundian handgunners; Edward was far away, but with the Duke of Norfolk, Baron Montagu and Earl of Suffolk, Warwick's army took up a defensive, fortified position in St Albans, blocking the roads southwards.

Battle was joined late on the 17th February – Edward was till far away in the Cotswolds. During 16th and 17th, Somerset had swung his army westwards, and as the entered St Albans on Warwick's left flank. In the confusion of trying to adjust, Warwick's army was routed. Warwick managed to pull together a remnant of his army, and marched west to find Edward, who had reached the Cotswolds. Margaret and the Prince Edward found Henry sitting under a tree laughing and singing. Margaret prepared to march on London and reclaim the government of England 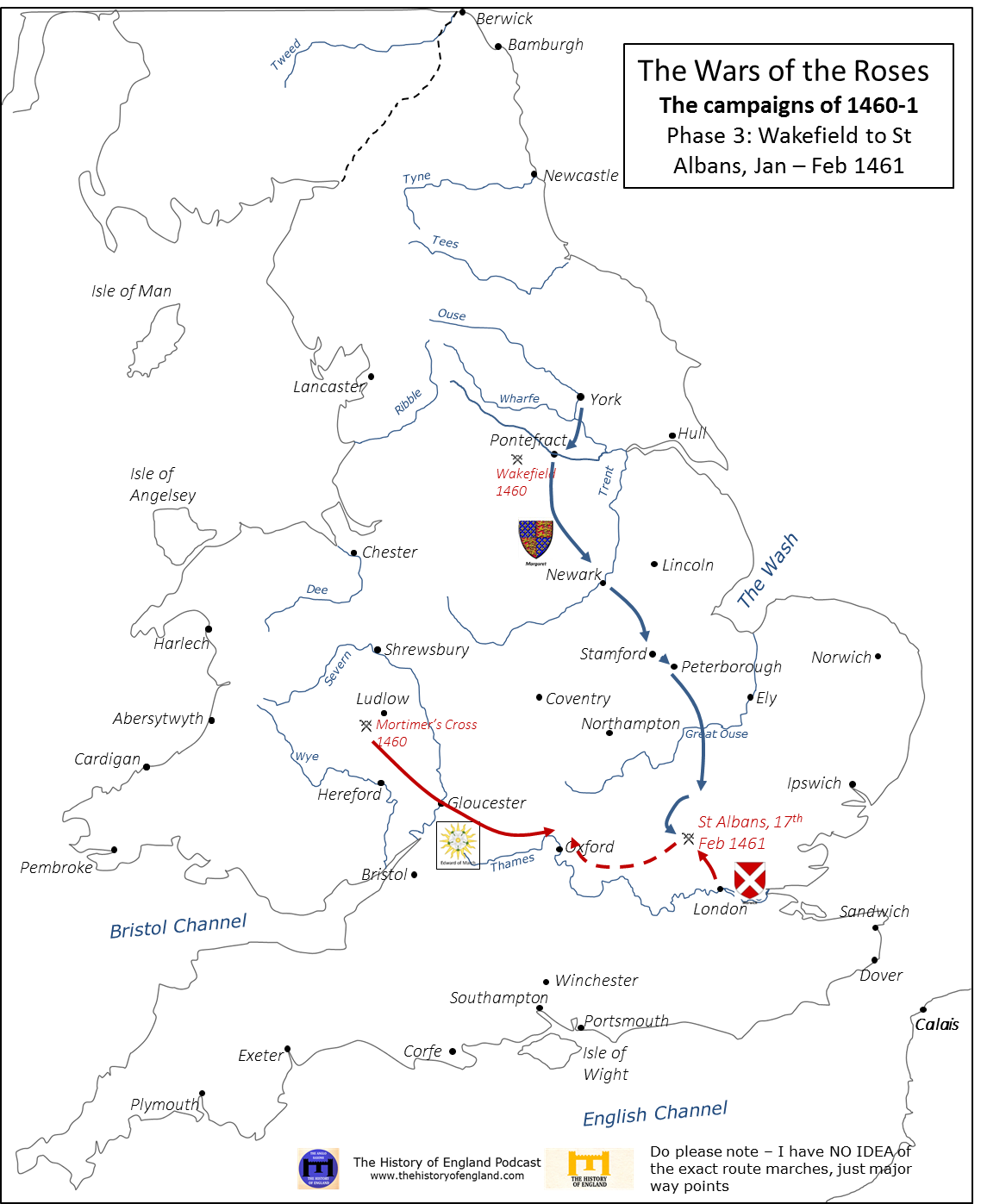