A chance to go into some byways, away from politics and talk about how medieval folk enjoyed themselves; the games they played in medieval days, from Football to Stoolball, from chess to skittles. And then,then completely unconnected, some of domesticated animals common in the Middle Ages – dogs, cats, horses and so on, where they came from, what they were called, how worked with man.

Did the Middle Ages have pet dogs or not?

Received wisdom is that lapdogs and dogs for pure companionship were not a medieval thing, they were far too practical. Well, here’s a few things then.

Firstly there’s the poet and writer Christine de Pisan (1364-1430). Here’s a picture of Christine writing away. Tell me if that  little hound is designed for anything practical? Look me in the eye when you answer. 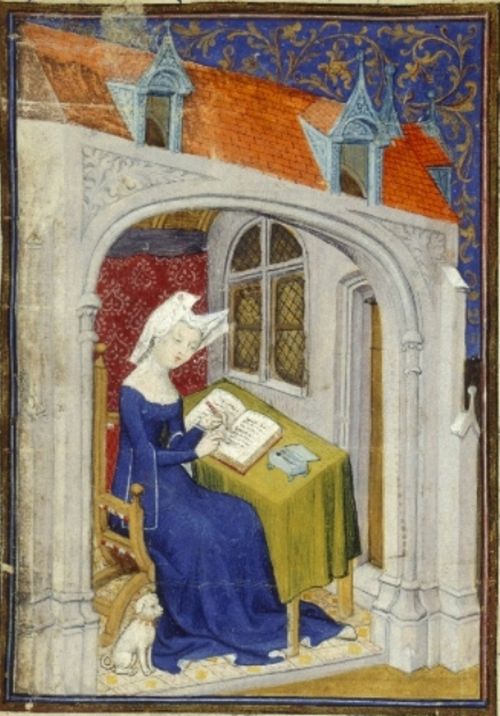 Plus, here’s a quote from the 15th century:

‘a greyhound, mastiff or little dog, whether on the road, or at table, or in bed, always stays close to the person who gives him food and ignores all others, being distant and shy with them. Even if far away, the dog always has his master in his heart. Even if his master whips or throws stones at the dog, the dog will still follow him, wagging his tail and lying down in front of his masters to placate him. The dog will follow the master through rivers, woods, thieves and battles’

Medieval man knew their dogs. Anybody’s for a sandwich.

A map of Smithfield market

Here’s a map of Smithfield Market in the Middle Ages, from Know your London; the names around the market are interesting…some have now disappeared.