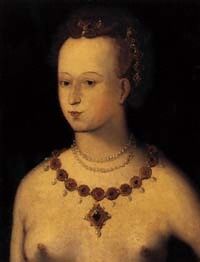 Jane Shore lives among the list of the most famous mistresses – along with the likes of Roseamund Clifford, Alice Perrers. Like Alice, Jane lives and loved at the very centre of political power for a while – but unlike Alice, left an attractive reputation.

Visit the Queens of England podcast site at www.queensofenglandpodcast.com

Hop along to the Richard III debate here!

187a Jane Shore by James Boulton

Jane married William Shore a London mercer, but the marriage was annulled in 1476, at her request, because of his impotence.

Edward IV claimed to have three concubines: the merriest, the wiliest, and the holiest harlot in his realm. Jane qualified as the merriest; according to Thomas More:

'a proper wit had she, & could both read & write well, merry in company, ready & quick of answer, neither mute nor full of babble, sometime taunting without displeasure & not without disport’.

'For many he had, but her he loved, whose favour to say truly … she never abused to any man's hurt, but to many a man's comfort. … And finally in many weighty events, she stood many men in great stead, either for none, or very small rewards, & those rather gay then rich: either for that she was content with the deed itself well done, or for that she delighted to be asked to help, & to show what she was able to do with the king'

Edward's death on 9 April 1483 left her in need of a new protector; and different chronicles link her with two great rivals – the Woodville, Thomas Grey, marquess of Dorset; and Edward's closest friend, and chamberlain William, Lord Hastings.

However, she fell foul of the pious Richard III and was forced through the streets of London to do penance:

'In which she went in countenance & pace demure so womanly, & albeit she were out of al array save her kyrtle only: yet went she so fair & lovely … that her great shame wan her much praise’

Jane found her protector in the king's solicitor, Thomas Lynom who married her. Lynom was dead by 29 July 1518; and Thomas More paints a picture of her penury; but if the Thomas Lynom who was active in Wales after 1518 was her son, it could well be poetic licence – something with which More was well acquainted. It's not sure when Jane died – but her memory is still alive and kicking in various historical novels!