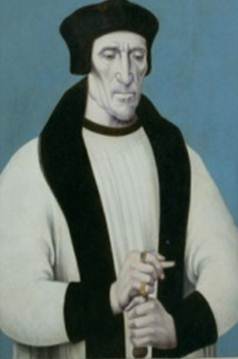 Henry VII’s ambitions were to rule in the French style – to better control and increase his income. He gathered around him bureaucrats – new men he could trust and who depended on him rather than the nobility of the court. We also start the story of printing.

The King’s Council could be an unwieldy affair; from 1485 to 1509 there were a total of 227 royal councillors; at any one time there were no more than 150 and only some of these attended a meeting of the Royal Council. But there would normally be 40 members. So the King had an inner circle of less than a dozen with whom he worked in his private chambers in Whitehall palace protected by his new Yeomen of the Guards. These men were given remits to represent the king in his sub committees like the Council Learned or Star Chamber; or trusted with the most challenging and sensitive administrative, military or diplomatic assignments. Until later in the reign, the vast majority of these men had one thing in common – they had either been with Henry in exile, or there was some other reason why  they had Henry’s trust. There were nobility among them; Jasper Tudor; John de Vere; Thomas Stanley. But many were from much more humble origins. These men did well from their service; but their relationship with Henry was rarely easy, and the king’s suspicions could turn at any time. For example, although Giles Daubeney was in high favour with Henry VII, he received a very harsh fine of £2000 and was forced to give up his French pension; apparently  for claiming excessive payments for the Calais garrison. Reginald Bray similarly was forced to give a benevolence of £600.

See the article ‘Henry VII’s Inner Circle’ for more information about some of the main individuals.