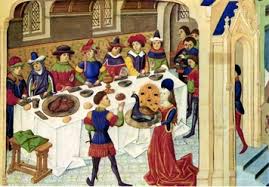 Henry made changes to the English court, administration and legal system. But many of his actions would be seen as setting a path to tyranny and avarice later in the reign

The English court: see the article The Tudor Court

When he came to the throne, royal finances were something of a mess. Income from royal lands in the very early years may have amounted to little more than £3,000, and total royal revenue to £50,000, of which £33,000 came from customs dues.

By the later part if his reign, Henry was saving money each year, ordinary revenue of £40,000, £40,000 from customs, and the French Pension. By the time of his death, Henry left stable finances, and a war chest invested in jewels and plate of probably £300,000.

The Council Learned in Law

The Council Learned was an equity court, or a prerogative court. This meant that it followed the precepts of Roman law rather than Common law. In particular, this meant it was charged with doing right, not with following law; and it made no use of juries. Just like the Court of Star Chamber, it was not a court sitting in a defined place with a defined terms of reference – it was just a group of the king’s councillors exercising the king’s authority. The title of the Court of Star Chamber acquired its name because Morton chose for it to sit in a particular room, and it had a star device on the ceiling.

The Council Learned was set up because the Exchequer was not successful at collecting the king’s debts, and nor was the Chamber. It was established in 1495 by Reginald Bray, but would become very closely associated with two particular names later in the reign – Richard Empson and Edmund Dudley. Siunce it was initially set up to deal with the Duchy of Lancaster, before extending it scompetence to all crown lands, its President was the Chancellor of the Duchy of Lancaster – first Reginald Bray, and then Richard Empson in 1504. Both were charged by Henry to increase royal revenue and bring

The Council Learned was a tool to achieve that. Unlike the other courts of equity (chancery Courts, Exchequer, Star Chamber, Court of Requests), the bulk of cases heard by the council Learned were initiated by the Government. As a prerogative court, it did not use normal writs; defendants received a letter telling them when to attend; but not where. It did not tell them the nature of the charge – just that they were to attend to answer questions. When they arrived, defendants had to search for the location of the sitting on that day; for many, it would have been a terrifying experience.