In the early 1500’s Henry VII saw many of his closest confidentes and supporters die. Catherine of Aragon was to be one of those who suffered as a result. He also built the rather magnificent palace at Sheen, renaming it Richmond; not knowing that in a few years, it would be the place of his death. 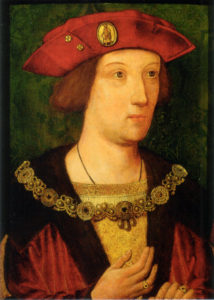 The death of Arthur, as preserved from a contemporary Herald account in the ‘Antiuquarian Repetory’ in the 18th century by Francis Grose.

“In the year of our Lord God a thousand five hundred and two, the second day of April, in the Castle of Ludlow, deceased Prince Arthur, first begotten son of our Sovraigne Lord King Henry the VII. Immediately after his death Sir Richard Pole, his Chamberlain, with other of his Council, wrote and sent letters to the King’s Council, to Greenwich, where his Grace and the Queen lay, and certified them of the Prince’s departing; which discreetly sent for the King’s goodly father, a Frere Observant, to whom they showed this most sorrowful and heavy tidings, and desired him in his best manner to show it to the King; which, in the morning the Tuesday then following, somewhat before the time accustomed, knocked at the King’s chamber door. And when the King understood it was his Confessor, commanded to let him in; which Confessor commanded all those there present to leave, and, after due salutations began to say:

[If we receive good things from the hand of God, shall we not also receive bad?”]

and so showed his Grace that his dearest son was departed to God. And when his Grace understood that sorrowful heavy tidings, sent for the Queen, saying that he and his Queue would take the painful sorrow together. And, after that she was come, and saw the King her Lord and husband in that natural and painful sorrow (as I heard say) with full great and constant comfortable words besought his Grace that he would, first after God, remember the welfare of his own noble person, the comfort of his realm, and of her; and how that my Lady his mother never had no more children but him only; and that God by his Grace had ever preserved him, and brought him where that he was; and that how God had left them yet a fair goodly Prince; two faire Princesses; and even that God is where he was, and we both young enough; and that the prudence and wisdom of his Grace sprung over all Christendom, so that it should please him to take this according thereunto.

Than the King thanked her of her good comfort ; and after that, she was departed, and coming into her own chamber, natural and motherly remembrance of that great loss smote her so sorrowful to the heart that those that were about her were fain to send for the King to comfort her; and then his Grace of true gentle and faithful love, in good hast came and relieved her, and showed her how wise council she had given him before, and he, for his part, would thank God of his sons, and would she should do in likewise.”

Shene manor had a manor house from Henry I’s reign, but it was Edward III who had first turned it into the royal Shene Palace in 1377. It was a great favourite of Anne of Bohemia, the wife of Richard II; but when she died, Richard was so upset he actually had the palace destroyed, which seems a little over the top. The place was completely razed,and its stone and resources used around the country.

Henry V, though, wanted a palace in the area, and so ordered it rebuilt. He planned for a large stone building, but the wars with France took precedence, and so the work was not completed, the palace was neglected, and the palace was left mostly made from wood. Then in 1445 when the palace was hurriedly repaired for Henry VI’s wife Margaret of Anjou. After this very little work was done – only general repairs and maintaining the palace.

Five years after his ascension to the throne Edward IV gifted the palace to his wife, Queen Elizabeth Woodville, as her residence for life; but in 1487, Henry VII took it back, and he invested heavily in the place. Shene was to be his example of a royal palace to rival any in Europe. So it was unfortunate that while work was still going on in 1497, a fire started in the Private chambers, got out of hand, and the place was massively damaged. Henry was there for Christmas, and presumably everyone had to scuttle out

Henry, started again, with plans more magnificent than before. Around four years later, in 1501, the palace was finally completed and considered upon a true renaissance palace in England. Henry renamed it as the palace of Richmond, after his family title of Earl of Richmond. Soon after the whole area would be known as Richmond. Though the work clearly wasn’t perfect; in 1507, the galleries suddenly collapsed. As it happens Prince Henry had just walked through – he could so easily have been killed, and then where would the Tudor Dynasty have been? Henry VII was livid, and had the builders imprisoned and the whole palace renovated.

Maybe his lucky escape was why Henry didn’t really like the place. He kept passing it off – to Wolsey; then Catherine of Aragon and Mary, and later Anne of Cleves. Henry’s daughters Mary and Elizabeth, though, both came to love Richmond Palace. Mary took her honeymoon there. In the reign of Elizabeth I, it reached its zenith; she spent a lot of time there, hunting red deer in the park, ordering plays performed in its halls; and she died there. But after that, it fell out of favour; James I much preferred the palace at Westminster.

The end of the palace

The Commonwealth of course recognised Richmond as nothing but a symbol of royal power, stripped the palace of everything of worth and destroyed it. It was never rebuilt, and eventually the crown eventually started letting out the grounds.