In 1513 there were two English victories. One of them would have a profound effect on English history. The other one was mainly a mad dash in pursuit of a bunch of cavalry eager to escape.

The Battle of the Spurs, 16th August 1513 and Flodden 9th September

The battle of the spurs was not completely irrelevant, even though it was little more than a skirmish. It gave Henry VIII a reputation he had lacked previously among the crowned heads of Europe. But at most its impact was short lived. The impact of Flodden on the othjer hand would be felt into the reign of Elizabeth I. It was a crushing defeat for the Scots and their talented king James IV. It presaged years of instability that would culminate in the death of Mary Queen of Scots at Fotheringhay in 1587.

The image below is rather good; it comes from the Scottish Clans website. It shows the difference between the ratrher antiquated English soldier and the Scottish soldier, equipped with the  formidable pike. But James IV threw away the advantage his military investment in arms, tactics and artillery had given him; because he insisted on fighting and dying with his men. 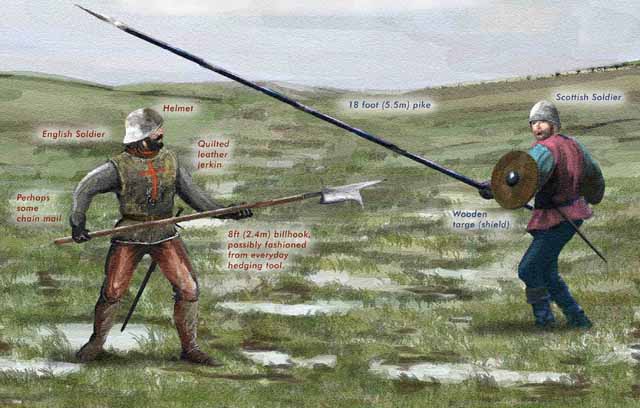