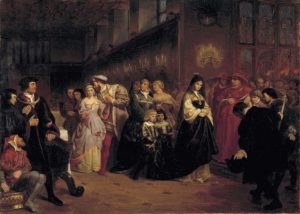 The king’s Great Matter as it was to be called, outraged and divided Christendom, and has been dividing us ever since. What motivated it? Who was responsible? The debate starts here.

Some of the big questions about the King’s Great Matter

We have all been divided for so long on so many questions in the fascinating subject of Henry VIII’s divorce. But here are 3 of the bigger ones.

Why? Why did Henry decide to get divorced from his Queen, Catherine of Aragon? Was it, as Catholics of the time and since would have us believe, just pure and simple lust for Anne? Or, as Henry would have you believe, was he motivated by a horrified understanding that his marriage was against God’s laws and therefore cursed? Or was he motivated by his responsibility as a king to deliver his people from the chaos and death of civil war, and make sure there was a son to inherit the throne when he died?

Who? Who was it that drove the whole thing, strategically? Some have argued that poor old Henry was driven to it by the ‘goggle-eyed whore’, Anne Boleyn, as Margaret Chanselor described her. They would have it that she nagged and manipulated the poor lamb until eventually he gave in and broke with an institution he had until then revered. Others have seen Henry as the decision maker, however prevaricating he might have been and even though he had Cromwell there as an implementer. While others yet have seen Cromwell, later on in the process, as sneakily introducing evangelical reform by the back door while Henry busied himself hunting small animals and women of various sizes.

What? What kind of a person was Anne and how should we view her example? As a proto-feminist hero, or a vindictive manipulative politician, or simply a woman of her time?

6 thoughts on “225 Matters Great and Personal”