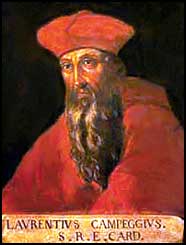 In 1529 the campaign for the King’s great matter, his divorce came to a climax. Wolsey persuaded the Pope to allow a court to be held in England under Cardinals Campeggio and Wolsey. On its success or failure would rest Wolsey’s own future.

Catherine of Aragon’s speech at the Legatine court

Catherine played the legatine court beautifully – and of course quite probably her words came straight from the heart. But to see Catherine as a simple victim I think underestimates her intelligence, determination and sheer bloody-mindedness. In 1528, she had turned down an idea form cardinal Campeggio that might very well have squared the circle for all; the idea that she retire to a nunnery. Such an option would allow her to keep her entourage, her honour, would actually have matched her personal piety and lifestyle, have saved her daughter from the threat of illegitimacy – and in all probability kept England within the Catholic church.

But Catherine had been born a Princess, married a king and become a Queen, and so she would remain. Here then, are her words.

“Sir, I beseech you for all the loves that hath been between us, and for the love of God, let me have justice and right, take of me some pity and compassion, for I am a poor woman and a stranger born out of your dominion, I have here no assured friend, and much less indifferent counsel: I flee to you as to the head of justice within this realm. Alas! Sir, wherein have I offended you, or what occasion of displeasure have I designed against your will and pleasure? Intending (as I perceive) to put me from you, I take God and all the world to witness, that I have been to you a true and humble wife, ever conformable to your will and pleasure, that never said or did anything to the contrary thereof, being always well pleased and contented with all things wherein you had any delight or dalliance, whether it were in little or much, I never grudged in word or countenance, or showed a visage or spark of discontentation. I loved all those whom you loved only for your sake, whether I had cause or no; and whether they were my friends or my enemies. This twenty years I have been your true wife or more, and by me you have had divers children, although it hath pleased God to call them out of this world, which hath been no default in me.

And when you had me at the first, I take God to be my judge, I was a true maid without touch of man; and whether it be true or no, I put it to your conscience. If there be any just cause by the law that you can allege against me, either of dishonesty or any other impediment to banish and put me from you, I am well content to depart, to my great shame and dishonour; and if there be none, then here I most lowly beseech you let me remain in my former estate, and received justice at your princely hand. The king your father was in the time of his reign of such estimation through the world for his excellent wisdom, that he was accounted and called of all men the second Solomon; and my father Ferdinand, King of Spain, who was esteemed to be one of the wittiest princes that reigned in Spain many years before, were both wise and excellent kings in wisdom and princely behaviour. It is not therefore to be doubted, but that they were elected and gathered as wise counsellors about them as to their high discretions was thought meet. Also, as me seemeth there was in those days as wise, as well-learned men, and men of good judgement as be present in both realms, who thought then the marriage between you and me good and lawful Therefore is it a wonder tome what new inventions are now invented against me, that never intended but honesty. And cause me to stand to the order and judgement of this new court, wherein you may do me much wrong, if you intend any cruelty; for you may condemn me for lack of sufficient answer, having no indifferent counsel, but such as be assigned me, with whose wisdom and learning I am not acquainted. You must consider that they cannot be indifferent counsellors for my part which be your subjects, and taken out of your own council before, wherein they be made privy, and dare not, for your displeasure, disobey your will and intent, being once made privy thereto. Therefore, I most humbly require you, in the way of charity, and for the love of God, who is the just judge, to spare the extremity of this new court, until I may be advertised what way and order my friends in Spain will advise me to take. And if you will not extend to me so much indifferent favour, your pleasure then be fulfilled, and to God I commit my case!”