Every year Henry took his court on a progress through the English countryside. Find out why and what he did from Natalie Grueninger and check out her website On the Tudor trail

More about Natalie Grueninger – and the prize she has donated “In the Footsteps of Anne Boleyn”, co-authored with Sarah Morris 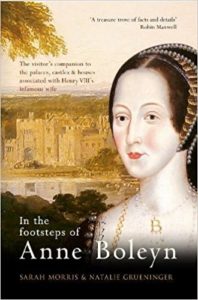 Natalie Grueninger is a researcher, writer and educator, living in Australia with her husband and two children. In 2009 she created On the Tudor Trail, a website dedicated to documenting historic sites and buildings associated with Anne Boleyn and sharing information about the life and times of Henry VIII’s second wife – which again I can heartily recommend, and have been on to many times.