Skip to content
You are here
Home > Hanoverians > Joseph Lancaster 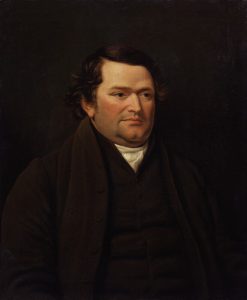 Joseph Lancaster is little known today, but in the first half of the 19th century his name was everywhere. He was described as ‘the poor child’s friend’ as he made education available for the first time to thousands, and hastened national education reform. 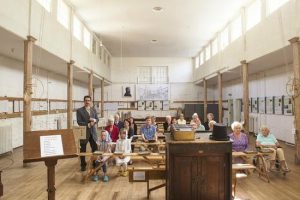 The British Schools Museum boasts the world’s last remaining purpose-built Monitorial schoolroom, which reflected Lancaster’s education system. You can see that in the image here to the left – and you can also see Andy the Interviewee as it happens. The grade II* listed building opened in 1837, but the school was founded in 1810, a full 80 years before the government finally provided free elementary education for all. 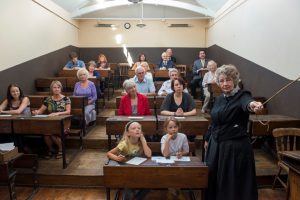 There are many other things to see too; the new History Makers exhibition, the Schoolmaster’s house, lovingly restored to its former Victorian glory, and there’s a Victorian classroom too. I was lucky enough to visit it and to be shown round by Andy, and absolutely loved it. It’s the kind of place that brings you face to face with real life as it would have been, and is a glorious example of our tradition of superb local museums. I heartily recommend it you you, but do visit the website first.

Above you can see the surviving schoolroom at Hitchin, and below you can see the description that the was produced to advise new groups looking to set up new schools. You can compare the theory with the reality. To the right you’ll see a more traditional classroom. 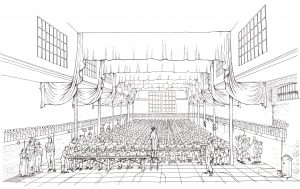 The British and Foreign Schools Society

The BFSS is a grant giving organisation. In a very British way, it finds a joy in its heritage and roots, and the legacy of Joseph Lancaster remains important in defining our objects and strategy. Which we interpret as a commitment to making education accessible to all, particularly to disadvantaged young people both in the UK and wherever they might be in the world.  You can have a look at its very business-like website if you are interested – its a working charity so you know there’s not a lot of history, there’s more information about how to apply for a grant (!), but you can get an idea of the kind of education projects we fund…just for interest really! The BFSS is a membership organisation, so there’s also a description if you so wish of how to become a Member, if you have the kind of commitment to our cause and want to get involved. But that’s not really the purpose of my episode which was just to tell you all about a corner of British history.

The history of BFSS can be found in its Archives, which are looked after by Brunel University London. Visit the website, Lists of British Schools, alumni of Borough Road College, photographs and much more are available to view online, as is the archive catalogue and information regarding how to contact the archives, its remote enquiry service and opening hours.

One thought on “Joseph Lancaster”