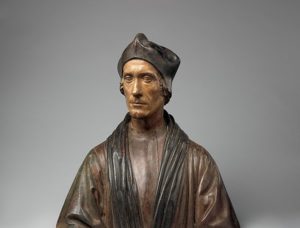 John Fisher was to his Catholic contemporaries, a straightforward hero, with none of the complexities and compromises of Thomas More. A Chancellor of Cambridge University, a brilliant theologian, reformer, preacher, a fine bishop who carried out his pastoral duties with great care. But most of all a man who clearly understood the consequences of Henry VIII’s divorce in a way that his boss, Archbishop William Warham, did not, until it was too late. And who with absolute integrity defied absolute power and paid for it with his life.

Fisher was born in Beverley, Yorkshire in 1469, to a wealthy Mercer. He followed therefore a similar path as did John Morton, and Thomas Wolsey – though education to Cambridge University, where he progressed to MA and was ordained in 1491. He rose in the service of the university as a Proctor, and would later become Chancellor.

You can hear a Shedcast about Fisher’s life. You’ll need to be a Member though – which you can do by Becoming a Member.

His life was changed in 1495 when his work took him to court, and he met Margaret Beaufort. The two of them formed a strong attachment that would last until Margaret’s 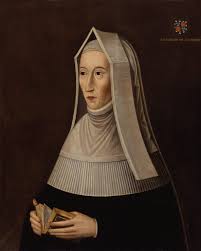 death; at the very first meeting, Margaret resolved that she would add him to her household. By 1498 Fisher was her household Chaplain, and by 1500 was her principle confessor. Fisher would write of her:

Once she had adopted me as her confessor and her moral and spiritual guide, learned more of what leads to an upright life from her rare virtues that I ever taught her in return.

Margaret was a generous patron as well as a pious one. One of Fisher’s achievements was to persuade her to use some of her money to found colleges in Cambridge; and so Christ’s College Cambridge was transformed from a rather run down grammar school, and St John’s College would be founded after her death, though Fisher would have to fight tooth and nail with her grandson Henry VIII to get those projects implemented. Fisher would speak admiringly of Margaret at her funeral.

In 1504 Fisher profited from one of Henry VII’s bouts of illness and subsequent desire to please God, and was made Bishop of Rochester, an appointment made on his theological talents rather than a political appointment – Rochester was too poor a see for that!

Even his evangelist enemies would concede that he was a model bishop. He ensured an active programme of visitations in his diocese; and even more unusually, carried out those visitations in person. He was from the start an enthusiastic and active preacher. The statutes he drafted for St John’s College made the training of preachers one of its express aims.

This was partly because Fisher disliked the secular political world of pomp and ceremony, and avoided it as much as possible. On occasion he couldn’t avoid it, and when that happened he moaned.

…by tossing and going his way and that way, time hath passed and the in meanwhile nothing done but attending after triumphs, receiving of ambassadors, haunting of Princes’ courts and such like: whereby great expenses rise that might better be spent other ways

The Field of the Cloth of Gold filled him with distaste:

Never before was seen in England such an excess of apparelment

Great money was spent, many great mens’ coffers were emptied & many were brought to the great ebb of poverty

Take away the glistering garment, take away the cloth of gold & what difference is there betwixt and Emperor and another poor man?

Fisher and the Reformation

This kind of attitude did not make him Henry VIII’s natural companion, but as a theologian of genuinely European reputation and standing, Henry was keen to have him around. He played an essential in supporting the king’s Assertio Septem Sacramentorum of 1521, refuting and roundly insulting Luther. Fisher was an implacable heretic hunter all his life; in May 1521 he started by preaching at the book burning of all Luther’s works. From then on, Fisher devoted himself to the destruction of Luther and all his works. He wrote a series of exhaustive and detailed writings, which made him the most famous theologian in Europe, and produced a body of work that would time and again form the basis for others to attack Luther and his supporters.

The King’s divorce changed everything. Initially, Fisher’s involvement was purely theological. Henry was desperate to have such an eminent writer on his side. Fisher responded by seeking to re-assure him. Only slowly did it dawn on Fisher where the king was going; and over time became the king’s greatest and most outspoken opponent. 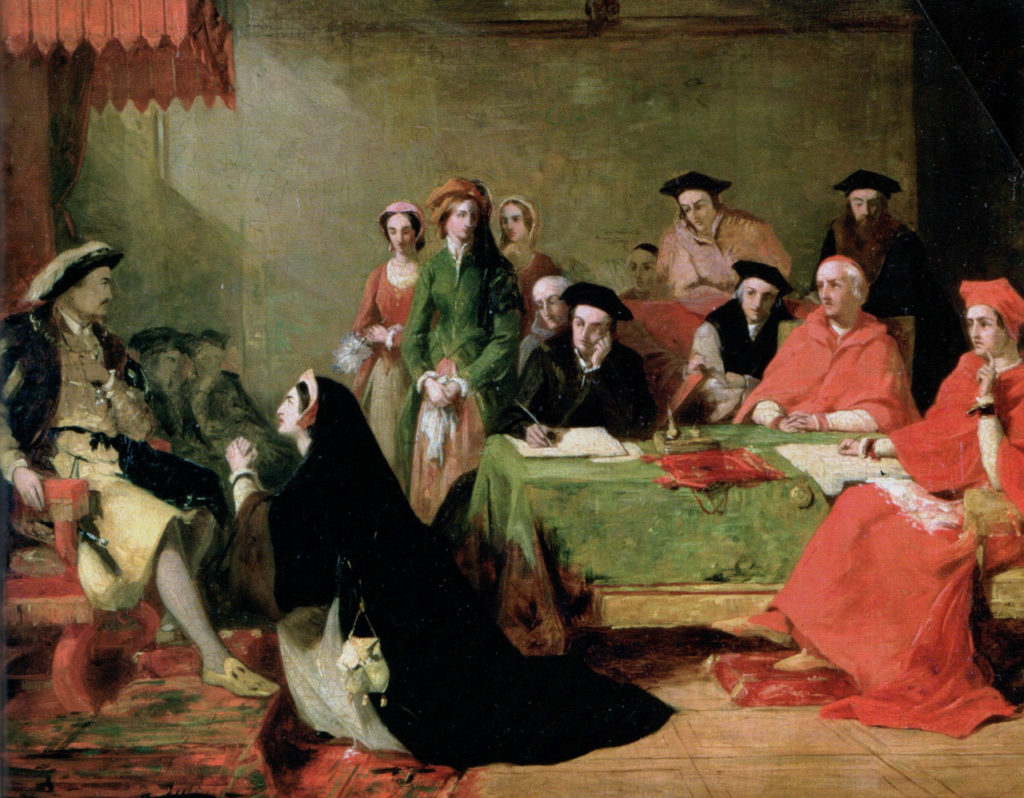 Fisher became once of Catherine’s firmest supporters; he wrote to the queen, he supported her, and more than that he whipped up support by writing pamphlets and so on. As far as Fisher was concerned, Kings should be subject to the authority of the church:

“Kings usually think that they are permitted to do whatever pleases them, because of the magnitude of their power. Therefore it is good for these kings in my opinion, to submit themselves to the decrees of the church…lest perhaps they kick over the traces and do what they like, so long as they can weave together some appearance and pretence of right.”

Brave he might be, but some of Fisher’s clerical contemporaries may well not have thanked him for his intransigence. Fishers arrogance and deep belief in Papal primacy, that reform of the church was the church’s business and nobody else’s, was part of the attitude that fed anti-clericalism. The anti-clericalism that Cromwell and Henry would use in parliament to bring about the very thing Fisher would die for – the Royal supremacy and break with Rome.

Fisher was almost alone in his opposition to the king. At the legatine trial in 1529 he supported Catherine, and spoke for her after she had left. In the Reformation Parliaments he was outspoken in defiance of the Commons and King:

Fisher was essentially accusing the Commons of heresy. He had gone too far; the Duke of Norfolk angrily told him ‘the greatest clerks be not always the wisest men’, the Commons lodged a formal complaint, and the king forced Fisher to take back his words. It was not the end of his resistance. Famously, the Convocation of the Church, the parliament of the church if you like, bowed to Henry’s demands to recognise his supremacy, but Fisher had the words ‘as far as the law of Christ allows’, limiting Henry’s supremacy.

By the end of September 1533 Fisher was clearly guilty of treason; he urged Charles V to get papal condemnation of Henry’s divorce and remarriage, and then bring an army to England to enforce it.

The Tower and Trial

In the end like More it was the Act of Succession which proved the final downfall. Fisher was in fact already in the Tower, and also tried silence; but was tricked by Richard Rich into giving his opinion that the royal supremacy was illegal and against the laws of the church.

In the Tower, Fisher was not treated well. He was getting on a bit now, 66 or so, and quite probably in someone’s mind was the thought that if he was kept cold, damp and under fed maybe nature would come and solve the king’s problem for him. Fisher was even forced to write to Cromwell:

“I beseech you to be a good master unto me in my necessity, for I have neither shirt nor sheet nor yet other clothes that are necessary for me to wear…my diet also God knows how slender it is at many times… I decay forthwith, and fall into coughs and diseases of my body, and cannot keep myself in health”

At this point the Pope, Paul III made Fisher a Cardinal, fondly imagining it might save Fisher’s life, an illustration of how little the papacy understood. Henry nastily declared that anyway before the Cardinal’s Hat arrived he’d make sure Fisher had no head left to put it on.

On 17th June 1535, Fisher was tried as a commoner by jury in front of Thomas Cromwell, Thomas Boleyn and 10 justices. Richard Rich was the only witness, and it was more than enough; Fisher was convicted of Treason and to be hanged, drawn and quartered, though commuted to beheading. He made a short speech as he was condemned:

My lords, I am here condemned before you of high treason for denial of the King’s supremacy over the Church of England, but by what order of justice I leave to God, Who is the searcher both of the king his Majesty’s conscience and yours; nevertheless, being found guilty, as it is termed, I am and must be contented with all that God shall send, to whose will I wholly refer and submit myself. And now to tell you plainly my mind, touching this matter of the king’s supremacy, I think indeed, and always have thought, and do now lastly affirm, that His Grace cannot justly claim any such supremacy over the Church of God as he now taketh upon him; neither hath (it) been seen or heard of that any temporal prince before his days hath presumed to that dignity; wherefore, if the king will now adventure himself in proceeding in this strange and unwonted case, so no doubt but he shall deeply incur the grievous displeasure of the Almighty, to the great damage of his own soul, and of many others, and to the utter ruin of this realm committed to his charge, wherefore, I pray God his Grace may remember himself in good time, and harken to good counsel for the preservation of himself and his realm and the quietness of all Christendom. 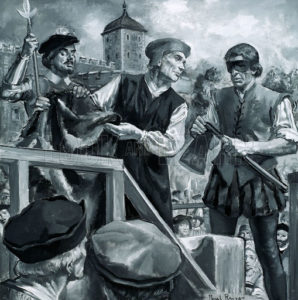 As you would expect from a man of such courage, conviction and with eyes fixed firmly on heaven, Fisher died with dignity. When he arrived, things weren’t ready and so he had to wait sitting on his mule; He spoke boldly to the crowd, telling them to be loving and obedient to the king; he’s a good king he said it’s just that in this one matter he’s been deceived.

Fisher stripped and everyone noticed his dry, spare, emaciated figure, the physical embodiment of the disciplined and determined man he was; and of course, unsurprising given the conditions he’d been held in at the Tower. He knelt slowly, laid his head on the block and died for the unity of Christendom its inherited faith and the rights of the Pope to determine the consciences of men and women in England.

His body was not treated with much respect – by order of a vindictive king who had probably never liked him, the headless body was left lying around for a while, as you do. His head was stuck up on a pike on London Bridge as normal, but irritatingly seemed to get fresher with each passing day. Seeing a miracle on its way, some thoroughly earthy bloke booted it into the Thames before he could cause any more trouble.