Skip to content
You are here
Home > Resource > Britain after Rome: The Fall and Rise 400-1070 by Robin Fleming 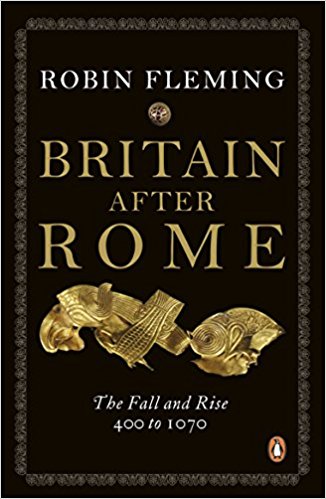 Britain After Rome: The Fall and Rise, 400 to 1070: Anglo-Saxon Britain Vol 2
The Penguin History of Britain
Robin Fleming
History
Penguin
May 2011
Paperback
480

The enormous hoard of beautiful gold military objects found in a field in Staffordshire has focused huge attention on the mysterious world of 7th and 8th century Britain. Clearly the product of a sophisticated, wealthy, highly militarized society, the objects beg innumerable questions about how we are to understand the people who once walked across the same landscape we inhabit, who are our ancestors and yet left such a slight record of their presence.

Britain after Rome brings together a wealth of research and imaginative engagement to bring us as close as we can hope to get to the tumultuous centuries between the departure of the Roman legions and the arrival of Norman invaders nearly seven centuries later. As towns fell into total decay, Christianity disappeared and wave upon wave of invaders swept across the island, it can be too easily assumed that life in Britain became intolerable - and yet this is the world in which modern languages and political arrangements were forged, a number of fascinating cultures rose and fell and tantalizing glimpses, principally through the study of buildings and burials, can be had of a surprising and resilient place.

The result of a lifetime of work, Robin Fleming's major new addition to the Penguin History of Britain could not be more opportune. A richly enjoyable, varied and surprising book, Britain after Rome allows its readers to see Britain's history in a quite new light.

The glory and maybe the frustration of this book is the amazing archaeological stories Robin tells. For instance; the story of 2 women buried in the same grave. The first was a high status woman, reasonably young (18-24) in good health (well, before she died obviously), and buried in a wooden coffin. On top of the coffin was the skeleton of another woman, older, between 35 and 45. She lay on her stomach, head twisted to the left, arms bent up and out, fist clenched, knees bent up under her, and on her back a heavy stone. It seems she had been thrown into the pit; she’d struggled up on her knees until someone heaved a heavy quernstone onto her lower back and fractured her pelvis. Â And then she was buried alive on the coffin of the other woman.

These stories are littered through this book. Robin Fleming very consciously takes a less traditional approach to the Anglo Saxon period than most; there’s relatively little about political history, much more on economic and social, and it might well be argued that this is a more balanced approach, and much less focus on what the textual history tells us. It has a distinct flavour which is at times challenging and invigorating, and at others mildly annoying – it’s a book I think that makes you react. I loved the real insights that the focus on archaeological evidence gave into the lives of everyone, not just the social winners; though at the same time, there’s sometimes too much of the archaeology – the detail can get in the way of understanding the bigger picture, and the frustrating thing is that there are often no answers, of course, to the story archaeology tells.

The bit I found least convincing was the idea that much of the early migration was peaceful, migrants fitting into a kind of egalitarian community building. There’s no doubt that generally the author’s vision of the real world of the migrations is much more convincing than the older, traditional view of the migrations would have it, but I help but feel it must have been accompanied, even in the early years, by a substantial degree of violence.

The last chapter and the attempt to paint a picture of what life must have been like is brilliant, and I’d say this book is essential reading for anyone wanting to understand the Anglo Saxon age. But I would recommend reading it alongside a more traditional book which gives more importance to textual sources and the political framework.