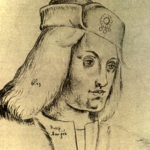 In November 1495, the Pretender (from the french for ‘claimant’) Perkin Warbeck arrived at the Scottish court, looking for allies in his attempt to win the English throne. Which of course he claimed as Richard IV, younger son of Edward IV.

The Scottish king was James IV (b.1473) who reigned 1488-1513, after seizing the throne from his father. James IV is considered one of Scotland’s more talented monarchs, and pursued an aggressive policy towards England, and an ambitious one towards Scotland’s role in Europe. He seems to have seen Warbeck as an opportunity, supported him financially and militarily – he certainly behaved as though he believed his story.

In January 1496, Perkin was married to a Lady Catherine Gordon. The Gordons were a very significant 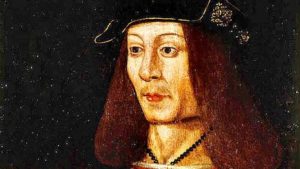 family; Catherine was a cousin to James IV, her father George Gordon was the 2nd earl of Huntly with wide estates in the north and north  East of Scotland, and Berwickshire. His attitude to both James III and James IV had been cautious. James IV is unlikely to have allowed the marriage to go ahead unless he was convinced there was a future; he wanted her father’s support. Catherine was born in 1474.

There is a letter which survives in the Spanish State papers which is apparently a letter from Warbeck to Catherine before the marriage:

Most noble lady, it is not without reason that all turn their eyes to you; that all admire love and obey you. For they see your two-fold virtues by which you are so much distinguished above all other mortals. Whilst on the one hand, they admire your riches and immutable prosperity, which secure to you the nobility of your lineage and the loftiness of your rank, they are, on the other hand, struck by your rather divine than human beauty, and believe that you are not born in our days but descended from Heaven.

I shall, perhaps, be the happiest of all your admirers, and the happiest man on earth, since I have reason to hope you will think me worthy of your love. If I represent to my mind all your perfections, I am not only compelled to love, to adore and to worship you, but love makes me your slave. Whether I was waking or sleeping I cannot find rest or happiness except in your affection. All my hopes rest in you, and in you alone.

Most noble lady, my soul, look mercifully down upon me your slave, who has ever been devoted to you from the first hour he saw you, Love is not an earthly thing, it is heaven born. Do not think it below yourself to obey love’s dictates. Not only kings, but also gods and goddesses have bent their necks beneath its yoke.

I beseech you most noble lady to accept for ever one who in all things will cheerfully do as your will as long as his days shall last. Farewell, my soul and consolation. You, the brightest ornament in Scotland, farewell, farewell.

Golly. There is however, a strong possibility that the letter was pretty formulaic, following a template. 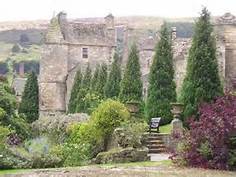 Catherine and Perkin set up home at the rather lovely Falkland Palace in Fife. Perkin did not acquit himself well in the invasion of England in 1496, and it is likely that James IV needed to get rid of him with the failure – to then allow an alliance with England, which did indeed follow. So Perkin traveled south to Cornwall, where a tax rebellion had recently flared in 1497. His attempt to seize the throne was a miserable failure, he was captured and taken to the king in October 1497.

Catherine Gordon followed her husband. It appears they had a son, Richard by the stage, and that she 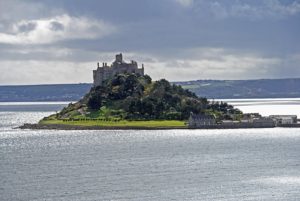 was pregnant with a second. You would think that Catherine, had she wished it, could have stayed in Scotland to await the results of what was a pretty desperate venture. Perkin certainly found a place for her to stay as far away from trouble as he could find in Cornwall – St Buryans. When Henry’s men were sent to bring her to Exeter to meet him, by which time she may have been at St Michael’s Mouint in Cornwall, and was in mourning and wearing black; and Henry’s letters refer to her being ‘in dole’ – mourning. What is really not clear is whether this is for her husband, for her children, or both. She seems to have miscarried of a second child; and Richard disappeared from the record, and therefore presumably also died. This ambiguity follows the whole story. Bernard Andre, the king’s poet, describes a tempestuous meeting where Henry rather fell for Catherine; Catherine is consistently reported as being beautiful, but then that again is rather common. Catherine apparently gave Perkin three degrees of verbal beating for his treachery. It’s not a reliable testimony.

Whatever Warbeck’s status, Henry had no power to annul the marriage. They seem to have been able to see each other, but not to sleep together. But by 1499, Warbeck had (possibly duped) tried  to escape, been put in the stocks and publicly humiliated, savagely beaten and displayed to the Spanish ambassadors, dragged through the streets of London and hung from the Tyburn tree.

Catherine meanwhile was very well treated by Henry, and despite his deserved pitiless reputation, Henry in many circumstances was well able to be generous – and so he was in this case. He made it clear that Catherine was to be considered the victim of rape and abduction. He supported her financially, and placed her in the household of his wife the queen Elizabeth. Henry continued to support Catherine; in 1501 she was given clothes of cloth of gold with ermine, a gown of purple velvet and a black hood in the French style for example.

Catherine and Elizabeth appeared to have got on very well; she was the chief mourner at Elizabeth’s funeral in 1503. And for a while after the death, Catherine remained at the English court and was supported by Henry, she played cards with him – Henry was a keen card player and gambler. 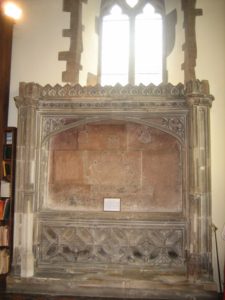 After Henry’s death, Catherine continued to be supported – she became an English citizen, and was given grants of land in Berkshire; and at some point before 1512 finally married for a second time to James Strangeways; she’s still only 38 years old of course. The gap of 1497 to 1512 is curious and interesting; it feels like a complicated situation for Catherine to be in, could be nothing in it of course. But her later life seems to indicate no aversion to marriage. James Strangeways died in 1516, and in 1517 she married Matthew Craddock of Swansea, thought they spent their time at court; Catherine was the head of Princess Mary’s privy Chamber until 1530.

Matthew died in 1531, and finally Catherine married Christopher Ashton of Fyfield in Berkshire; she died in 1537 and was buried in the church at Fyfield.  In her will, Catherine referred to herself as the “sometime wife” of James Strangeways, to Craddock as her “dear and well beloved husband” and Ashton as her “beloved husband”. Into these standard phrases is often read that two at least of these marriages were love matches. It could be so – but certainly not conclusive. What she really thought of Warbeck and regarded her marriage to him is also unknowable. Which is irritating. I’d like to know.