I had got used to the presence of beards in medieval history – all those stylised, indistinguishable pictures of 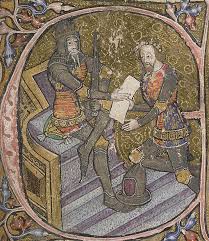 medieval kings with flowing locks and beards. English kings had always been bearded. Then along came Henry V, and suddenly they were out of fashion – really Henry V was quite a radical. It was even more remarkable really, since

Henry had been scarred in his youth by a disfiguring arrow wound – but presumably Henry was keen to use the scar as part of the warrior persona.

Every king wanted to be Henry V, so his followers all the way to Henry VII then de-bearded. And in fact, one book I dipped into (Beard fetishes in early Modern England …by Mark Johnson) even said that Henry VIII as a young man didn’t wear a beard. Though the only surviving portrait of him pre beard and post childhood is in 1509 when he was 17 (there it is on the left), so he’d have had the bumfluff problem if he’d worn a beard then.

A diplomatic incident does suggest that Henry was clean shaven before 1519 – and also led to Henry bucking the trend and setting a new fashion. So, Thomas Boleyn, the less-than-scrupulous courtier who made a career by chucking his daughters at kings, was on diplomatic duty in France in 1519. After the Treaty of London in 1518, where 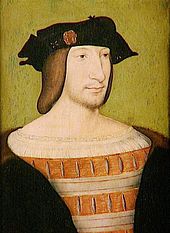 all the powers of Europe swore to be nice to each other (ha!), Henry was due to go over to France to meet Francis I. But then the election of a new Emperor came up, so he wanted to postpone. Thomas Boleyn was tasked with selling this to Francis and his mother Louise of Savoy, and we find out what happened in a letter from Thomas Boleyn to Thomas Wolsey. Henry chose a curious approach to reassure the French – he swore to wear his beard until they met. Well, that’s interesting. I mean I can’t imagine that happening in modern diplomacy. Donald Trump making the same promise to Theresa May for example. Though there may be other reasons for that. But also, it must have meant that wearing a beard was a bit of an imposition as far as Henry was concerned.

Anyway, it did the trick for Francis and Queen Louise.  In finest courtly manner Francis ‘laid his hand on his beard, and said surely he would never put it off till he had seen him’. Boleyn and Francis then went on to talk about other stuff. I was intrigued to see that Boleyn wrote to Wolsey saying that Francis had said that ‘He desired to see the Cardinal more than any priest living.’ Did he really, do you think, or is this an example of early modern toadying from Boleyn to his boss Wolsey?

Anyway, beard-wise there was a problem. Henry’s wife, Queen Catherine was not impressed with said facial hair. According to Boleyn, every day Catherine had a go at Henry and told him she hated the beard, did he really have to wear it, please could he shave? Catherine’s parents had been clean shaven too by the looks of things. There was a deal of anti beardery about. In 1447, Henry VII had decreed that forbade the wearing of moustaches and required that the upper lip be shaved every two weeks. As late as 1542, members of the English Bar were not allowed admission with a beard, lawyers with a beard would had to pay double for their daily meals.

Eventually, good husband as he was, Henry gave in and shaved the thing off. Later he would realise that he could have just cut her head off instead, but he was young and foolish in 1519.

But oh dear, the news got back to France, via a Venetian diplomat. (Seriously, didn’t these guys have anything better to talk about?). So Louise, Francis’s mother, took Boleyn to task. Boleyn explained that it was a domestic issue, but this didn’t do it for Louise – ha, Catherine’s working for the good of Spain. However, Boleyn’s oily assurances did the trick and Louise eventually conceded that ‘…[love] is not in the beards, but in the hearts’. 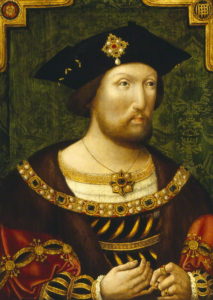 And so then, in 1520, the year of the famous meeting at the Field of the Cloth of Gold, we have a picture of Henry VIII, and there it is, beard fully in place. There are two possible explanations. One is that when Henry saw a picture of Francis’s beard, grown in honour of the agreement, he was jealous. Another is that he might have decided that he didn’t want to leave himself open to jibes from Francis went they met. So, Catherine’s comfort was sacrificed on the altar of European diplomacy.

After the Cloth of Gold thing in 1520, Henry shaved again…and then started wearing it once more. I suspect that he was affected by the Venetian ambassador who reported on the beard, describing it as ‘golden’. Henry might well have been taken by this, and seems to have begun to see the beard as a symbol of his monarchical and patriarchal authority, and golden has much nicer connotations as a word. History might have been different if the Venetian ambassador had referred to the beard as ginge.

But that is not all beard-wise. We then get to an incident in 1535 where Henry was reported in making an important announcement to his court. This is from the contemporary antiquarian John Stowe:

‘The king commanded all about his court to poll their heads, and to give then example, he caused his own head to be polled and from henceforth his beard to be knotted and no more shaven’.

Henry appears to have been something of a ditherer, since this implies that he’d been sneakily shaving, but maybe that just means he’ll let it head towards his knees and keep it under control by some nice plaiting. The occasion seems to have been that Francis had been wounded in a snow ball incident and had to shave his head to have it stitched up. Henry was showing solidarity with his brother monarch.

Incidentally, I think I may also have discovered a bit of fake news; there’s a rumour on

Wikipedia and other places on line that Henry introduced a tax on beards; but no one appears able to point to any original documentation. Maybe it’s a misreading of the Poll thing – interpreting to poll as to introduce a poll tax. Just a suggestion, but let me know if anyone has any firm provenance for the tax thing.

I have two more things to say on the matter. First is to note that anti beard legislation was repealed in England in 1562, a relief to all us hirsute folks. Secondly, I wonder if Henry was a trend setter on a European scale? So, Francis I grew his beard because Henry suggested this diplomatic thing – Louis XII his predecessor had been clean shaven. Charles V, King of Spain and Holy Roman Emperor wore a beard, even though when young he’d been clear shaven, and even though his predecessors Ferdinand of Aragon, Philip of Burgundy and Maximillian HRE had all been clean shaven. Maybe Henry and his love of his golden beard revolutionised the European chin?

6 thoughts on “Henry VIII and his Beard”