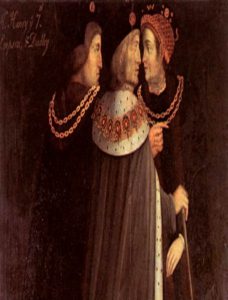 Richard Empson and Edmund Dudley would both earn themselves the reputation as Henry VII’s hatchet men – which is fair enough; but in addition they would be characterised by Polydore Vergil and others to characterize as extortioners. this is both fair and unfair; on the one hand, even Dudley himself ended up confessing a long list of individuals he had wronged. On the other hand, all they did was sanctioned and encouraged by the king – they were truly their king’s loyal and faithful; servants. Their tyranny lies at his door as much as their own.

Dudley was educated at Oxford, and pursued a career as a lawyer. He specialised in the prerogative rights of the king, which qualified him very well for Henry VII’s purposes. He was elected to parliament in 1491–2, and again in 1495 as knight of the shire for Sussex. Then in 1504 Dudley was appointed by Henry VII as speaker of the Commons, and from October 1504 was paid £66 as a councillor of the king. By July 1506 he was president of the king’s council, the first layman to hold the position. His rise to power had been real and rapid.

By 1504 he was also part of the council learned in the law, chaired by Richard Empson. He filled a gap left by the deaths in 1503 of Reginald Bray, and maintained meticulous accounts he discussed frequently with the king. His role was to manage the king’s use of a range of ways to exploit his greater subjects. He sold offices, wardships, and licences to marry the widows of tenants-in-chief; pardons for treason, sedition, murder, riot, retaining, and other offences. In less than four years he collected some £219,316 in cash and bonds for future payment. He had rather viciously enforced the king’s rights. .

The nobility knew they had to retain his favour. The Great Chronicle of London recorded “the chief lords of England were glad to be in his favour, and were eager to go to him for many urgent

causes”. He knew the ways of London; he uncovered customs fraud and coinage offences, raised customs rates and forced the king’s candidates for civic office on the citizens; worse, he extracted £3333 for the king’s confirmation of London’s liberties. His agents. like John Camby, quickly acquired a reputation for extortionate use of their influence. The Chronicle again wearily noted that “whosoever had the sword borne before him, Dudley was mayor, and what his pleasure was, was done”. He was not popular – Preachers inveighed against them at Paul’s Cross and elsewhere. All of this was to the profit of the king – and Dudley. By 1509 Dudley had built up a landed estate in sixteen counties, worth some £550 a year gross, plus £5000 or more in goods.

Like Empson, on Henry VII’s death in 1509, Dudley was a fall guy for what was essentially his master’s policy. He was tried in London in July 1509 and convicted of treason; the ludicrous accusation was that he planned to “hold, guide and govern the King and his Council” with a force of men. He probably did assemble a force of men given the political uncertainty – but it is highly unlikely he intended a coup d’état. Dudley was finally beheaded on Tower Hill in 1510.

Dudley composed a petition in the Tower he sent to Richard Foxe and Thomas Lovell. He listed those he felt had been too harshly treated and scores of bonds taken for debts which Henry intended as a means to guarantee the good behaviour of the debtors rather than as a means to extract payment. He was also clear that it was Henry that was responsible for this policy.  He also used the time to compose a treatise on government and society, The Tree of Commonwealth.

Empson was a lawyer, and from 1477 until 1483 he had been connected with the duchy of Lancaster.  He was restored when Henry VII came to the throne, and used his position to build his reputation, landholding and offices in the midlands, Warwickshire and Northampton in particular.

His big, and ultimately fatal, break came in 1501. Empson became a councillor to Henry, duke of York. By 1504 he was part of the Council Learned in Law, and in 1505, he became Chancellor of the Duchy of Lancaster.His new-found position gave him the opportunity to further enrich himself. He acquired lands in Oxfordshire, Warwickshire, Gloucestershire and Northamptonshire, acquired various lucrative wardships by favour of the king.

As chancellor, Empson relentlessly strove to increase the king’s revenue. He raised rents, cancelled rebates, ran surveys and audits, investigated feudal dues. As part of the Council Learned he pursued the king’s debtors  and his techniques were not pretty. He dug out approvers, third parties who would bring prosecutions against individuals; he imprisoned people to force them to settle fines he issued official summons by privy seal, but victims then found themselves in front of Empson at his own London manor at St Bride’s. He raised money also by pardons, countersigned by the king, uncovering forfeitures on outlawry; exploiting wards. Where he found wrong doing, the result was usually a fine to the king.

OK, in the main Empson was the tool of his master. But he used his position to further his own ends too – for example his attempt to disinherit Sir Robert Plumpton in the interests of his daughter. He used the traditional methods – having one of Plumpton’s bailiffs beaten, stacking juries, and bringing a bunch of hairy retainers to intimidate judges. Plumpton only fought him off because he too have powerful friends in Richard Foxe and Thomas Lovell.

Henry VII trutsed him without doubt; Empson was one of his executors. But after Henry VII died on 21 April 1509, and Empson was arrested just three days later. Treason was read into his summons (for his own protection) of armed men to London as and after the king lay dying. He was charged at Northampton and pleaded his own, but was convicted and sentenced to the death of a traitor. He was attainted in the parliament of January–February 1510, and beheaded, along with Dudley, on Tower Hill on 17 August following. His eldest son, Thomas, was restored in 1512.