Medieval prices and wages are basically impossible to know. I can hear you fighting against this as a write but there are so many vagaries. Just for example – board and lodging would be part of some jobs not of others; wages might vary a lot around the country. However it’s possible to get an idea of scale. When you look at the below, bear in mind that inflation is basically zero  throughout the Middle Ages; when inflation arrives with the bullion of the new world, in the 16th century, it’s a terrible shock.

As it says in Kenneth Hodges’ site, the English system is based on the pound, shilling and penny (Latin liber, solidus, and denarius,   which is where the English abbreviations “L.s.d” come from). The French livre, sou, and denier are equivalent to the pound.  The conversion is: 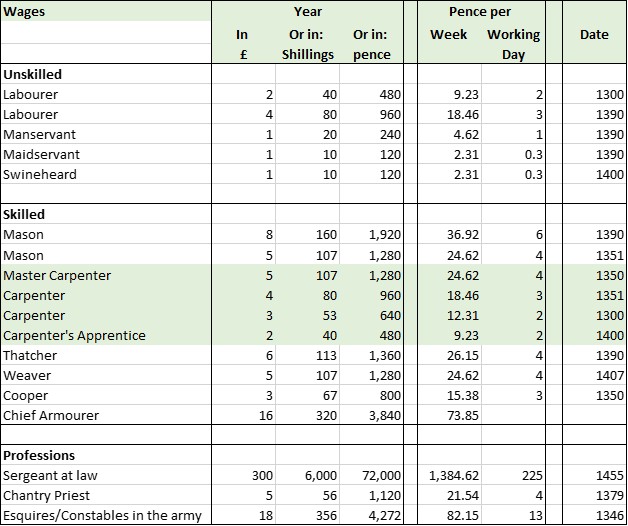 Then there are prices. Here are a few to give an idea of how far that might stretch; I’ve picked a few out. So, if you were a labourer, a bottle of plonk was a day’s work; a mildly fashionable gown a quarter of his annual income. A university education would cost £81/2 a year – beyond the means of Master Craftsmen. Bread, by the way, is not on the lists, presumably because most people bought wheat and made their own. I had a go at calculating the price of a loaf. If you want the detail go to the end. It’s quite dull. But I enjoyed it. 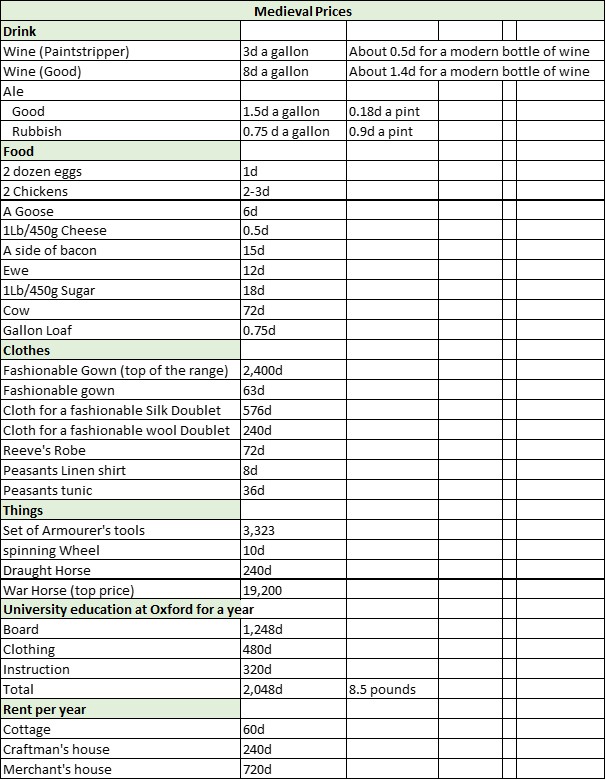 Great sites to find out more

The statistics that float around derive often from a monster list put together by a chap called Kenneth Hodges – you can see it on the Medieval Sourcebook. There is a little more detail in this other website.

There is a really interesting article from a chap called Vlad here – interesting, but I cannot vouch for the accuracy.

And then, very bravely, there is a converter here which tries to convert money values into modern values. It’s a hopeless task of course, because it’s really about buying power. But it’s a bit of fun. The Bishop of Winchester’s income was £4,000 give or take in days medieval; according to this site this equates to £2m. Huh. Doesn’t seem unreasonable.

The Price of bread (for the most nerdy)

We will immediately notice that the main staple of the medieval diet, bread, is not there. I imagine this is because people would buy wheat and make their own bread, but I could be wrong. so I worked it out from the price of a bushell of wheat. The thing to note is that the price of wheat was very volatile in the short term, though stable in the longer term. So in bad years, the lower earners were badly affected. 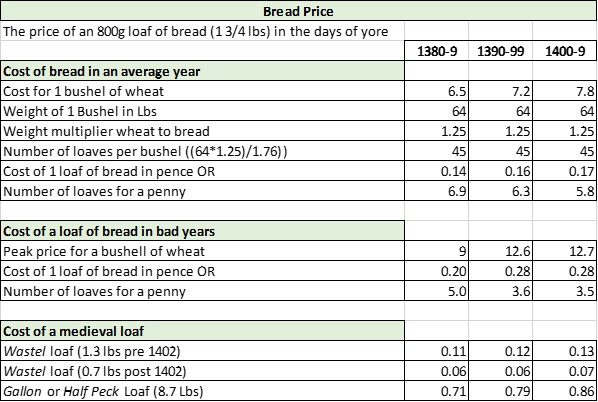 67 thoughts on “Medieval Prices and Wages”