My tale of the Church of St Bartholomew the great. Available in podcast format too, if you become a member ! 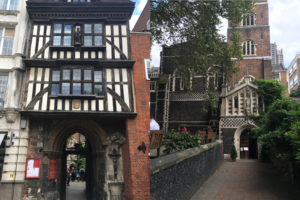 There I was in Smithfield. Frankly it was a bit of a mess – hideously noisy, building going on, lorries, and worst of all, I came across some plaque about a dead Scot which is always disturbing (Just joking. Love Braveheart really.). Anyway I was a bit frazzled, slightly sweaty, and apparently overweight according to the reflections in various shop windows. Then I spotted a rather lovely old gateway. Through I went. To discover both an oasis of peace, and the most wonderful church. Now to be honest, it transpires that I may be one of the last visitors to London not to know of St Bartholomew the Great, but the discovery was all the better for being un-looked for.

So why so wonderful?  Because here in the heart of London is a magnificent medieval, Norman/Romanesque church. Spend a bit of time  wandering around the city of London and you’ll soon realise that this is unusual; pretty much all of them were burned down in the Great Fire of 1666, or bombed out in the blitz; lovely though London’s churches are, you have to learn to love baroque. This church survived them both. And then it’s the experience of walking through a small gateway into a small quiet churchyard before the church itself. It’s also apparently one of the churches in Four Weddings and a Funeral, AND appeared in Robin Hood: Prince of Thieves. So, can’t be bad. 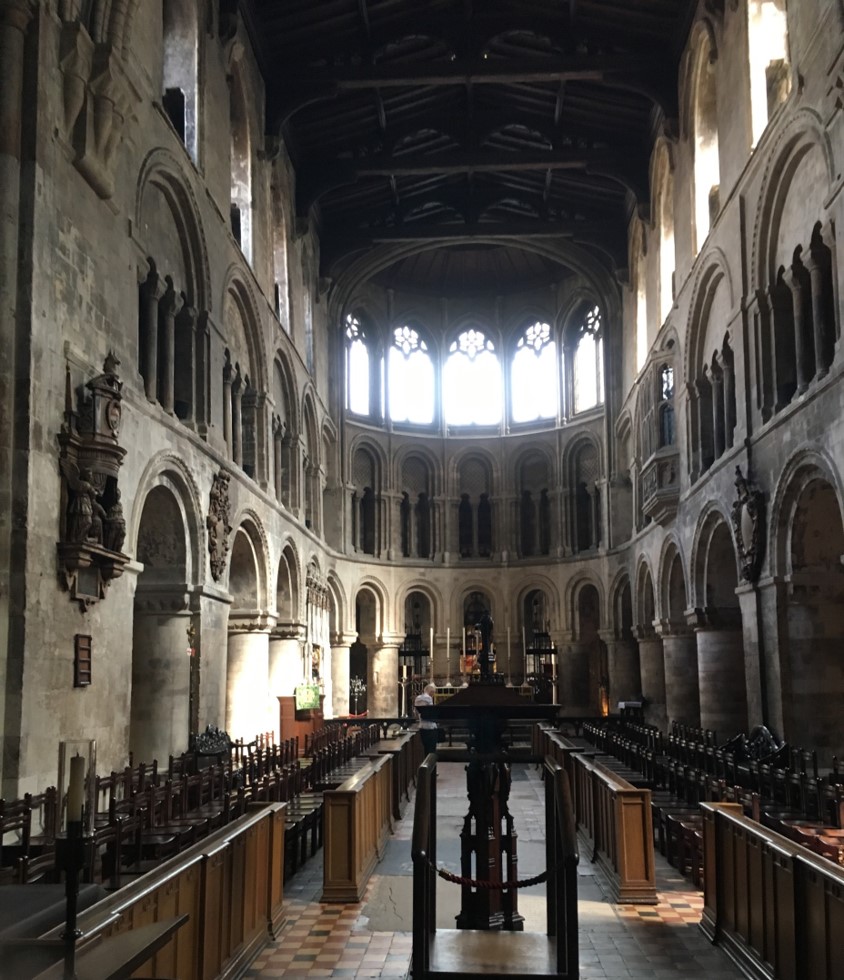 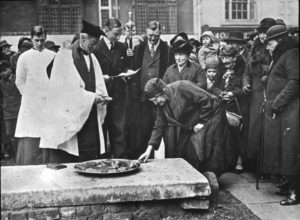 Plus, like so many nooks and crannies, it is a collection of stories. There’s the story of the church, and its founder (see below!); and then this church yard is home to an annual event, the distribution every Good Friday of the ‘widow’s sixpence’. This was set up by a publisher, Joseph Butterworth (whose descendant company I worked at for a while) in 1887:

“On Good Friday in each year to distribute in the churchyard of St. Bartholomew the Great the sum of 6d. to twenty-one poor widows, and to expend the remainder of such dividends in buns to be given to children attending such distribution.”

Apparently what happens now is that there are no poor widows around in this part of the world. You can’t be a poor widow and own property in Smithfield. So the vicar climbs up on a stone and asks if there are any poor widows around who need 20 shillings (inflation, you see). Then there is a sermon, followed by buns. Everything is better with a bun.

The Church of St Batholomew the Great

The church is just a stunner. It’s a lot smaller than it would have been once, because all that survives is the east end of the church, the Chancel mainly; if you go and see it, and if you are in London you really should, imagine what it would have been like once upon a time! It would have been enormous. It was founded in 1123, and was added to – the transepts in the 13th century, restored in the 15th, and the small tower is 17th century. It hits you also because of its height – 3 levels, with a clerestory and triforium above it, with the sun bursting through the windows. 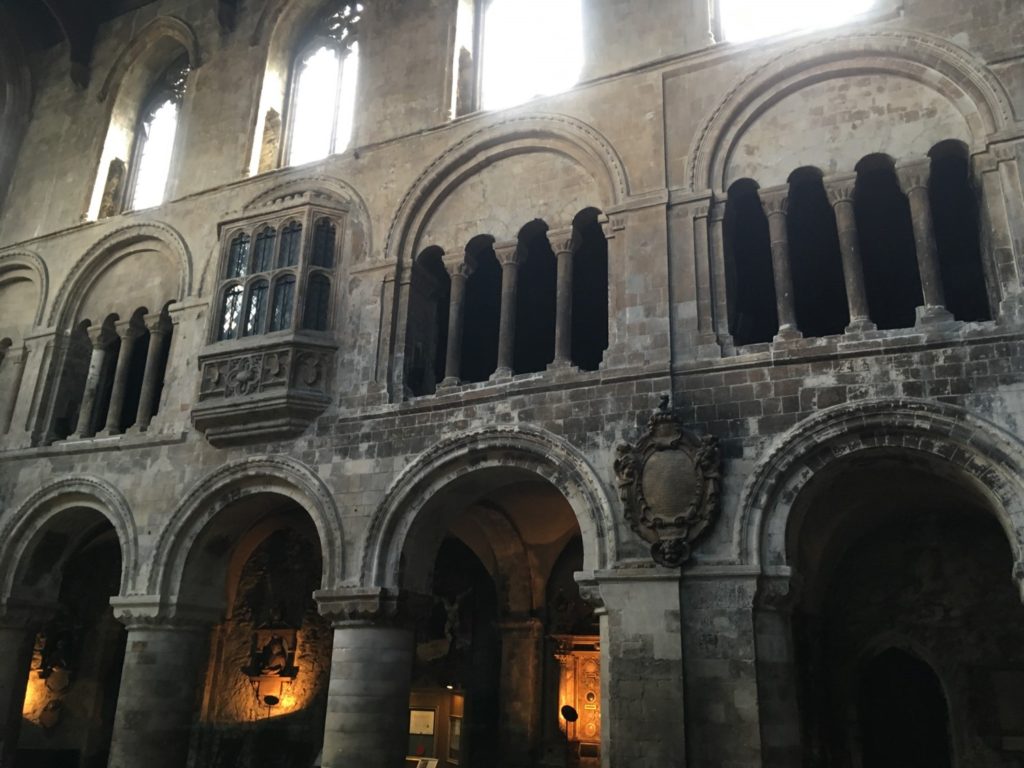 There’s a slightly incongruous, though beautiful, Tudor oriel window on one side, built by Prior Bolton in the early 16th century.  It was, in fact, an Augustinian priory as well as a hospital, and during the dissolution of Henry VIII, it was bought in 1539 by the Tudor Chancellor Richard Rich, made a villain by Robert Bolt’s ‘A Man for all Seasons’. (By the way, there is no evidence from the time that Thomas Moore accused Rich of perjury, despite contemporary reports of the trial. Bolt made that up. Made for a better story). Rich bought it for £1,064 11s. 3d, and thirteen canons were out on their ears – though they received annuities of £6 13s. 4d. The decline of the priory after dissolution was not necessarily to the total destruction that some suffered, or the destruction that left picturesque ruins such as places like Rievalux. It was piecemeal; parts of the church, what is now the Lady Chapel, were used as a house, later a printing works and then a lace makers – before being restored to the church. The Chapter House was destroyed by fire in 1830. The refectory of the priory became a tobacco factory, divided into two or three stories. The crypt, which ran below the refectory, still exists. 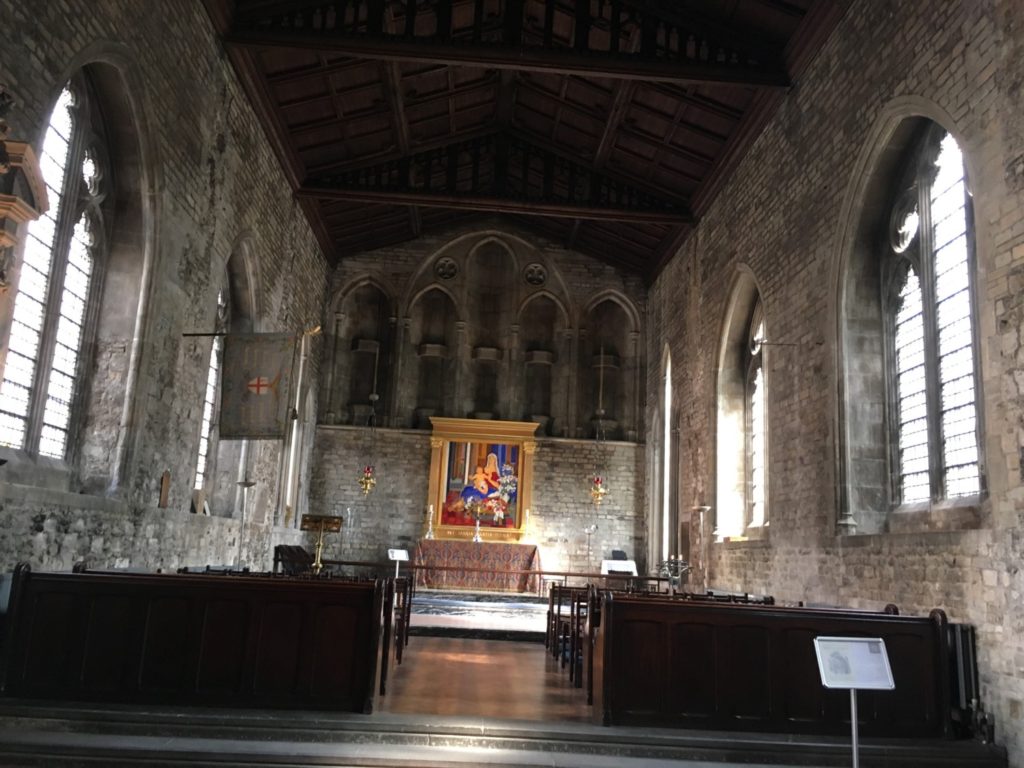 If you want a really good walk through of the place, I found a brilliant blog called ‘A London Inheritance’. Isn’t the interweb fab?

The church is not only simply lovely; it has a great story attached to it of its founder – though all of the below 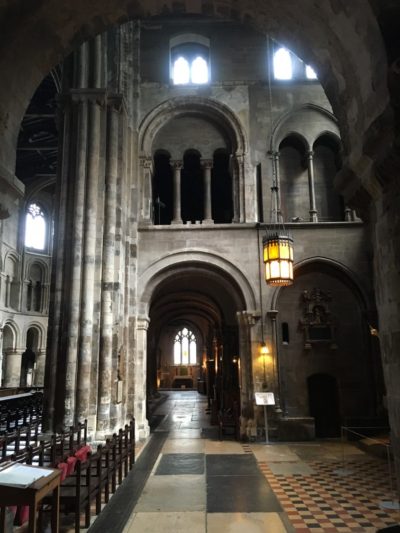 relies on assuming that the 15th century copy of the Liber fundacionis ecclesiae Sancti Bartholomei Londoniensis is faithfully copied.  Rahere was reputed to be just a bloke, a ‘man, sprung of humble lineage’; this is according to the liber originally written 40 years after his death. This is an odd name; in common with many names in the late 11th century, there was no patronymic or surname. Rahere though is a Frankish name, and we are not long after the conquest, many as few as 20 -30 years at this point, so he may be lowly, but to be a Norman may have opened doors. Of course he could have been Anglo Saxon who knew which side his bun was buttered (see, everything’s better with a bun). Anyway, Rahere was not content with the life humble, he seems to have been an enterprising youth, so he made the most of his wit; he set himself up as a jester to impress the mighty. He got the garb worked out first, and then made friends with as many nobles as would listen whom he “soothed with jokes and flatterings”. This got him into the court of Henry I (1100-1135). Before long he seems to have been a well-known figure at the court, part of the partying and celebrations, and had grown rich on the proceeds, and on his talent for music. Rightly or wrongly, the 16th century Thomas of Reading claimed he was:

“the most skilfullest musician that lived at that time, whose wealth was very great, so that all the instruments whereon his servants plaid, were richly garnished with studs of silver, and some were gold”. 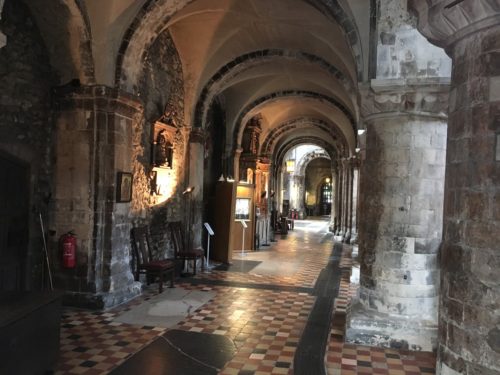 But at some point Rahere seems to have been struck down by guilt at his life of loose living, fun and games, and he experienced a conversion. Horrified and penitent, he set out for Rome to beg forgiveness for his sins. But there his troubles just got worse and he fell ill, possibly with malaria. So like more than one person before and since he promised great things to God if She would let him live. He would set up a “hospital” for the poor. A hospital, by the way, was not quite what it is now. The word comes from the Latin hospes, or stranger, and therefore the meaning of guest is important. A hospital was designed for travellers to rest on their way, it was to deliver alms and a place to stay for the the poor.

‘Now that place, however, before its cleansing, holding forth no hope of offering anything good, was very foul and, like a marsh, at almost all times abounded with filth and muddy water. And the part which was above the water was allotted to the hanging of thieves and the punishment of others who had been condemned by judicial authority.”

Remember, London is still a small place. Smithfield is a grassy place, outside the city walls near Aldersgate. None the less, the site was cleared, building started in 1123 and the church was consecrated in 1127.

Rahere by this time had become an Augustinian. He was a reformed man, and won fame for different reasons; he won respect as a man

“rich in purity of conscience, diligent in divine service, sober and prudent, humble towards his brethren and benevolent to his enemies, while gently providing care to the sick and poor.” 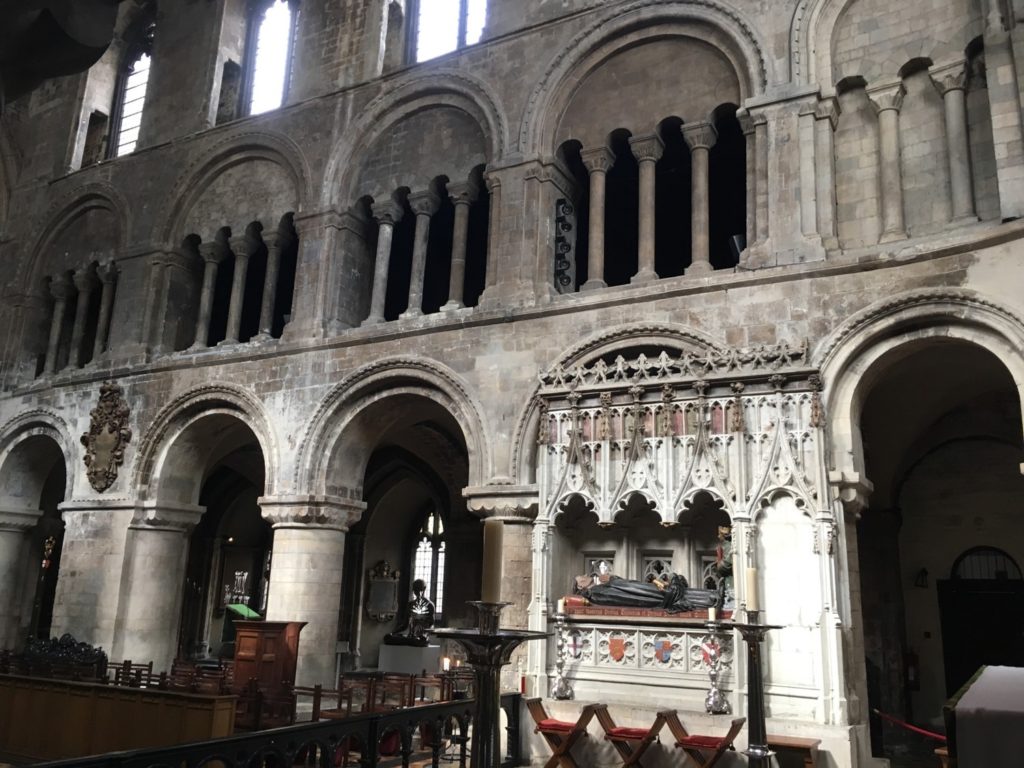 The hospital soon won a reputation for miracles and healing. But while he won admiration, he also won enemies. Some resented the erstwhile jester’s rise to power, becoming an arbiter over life or death, and planned to kill him. He again petitioned King Henry, who in 1133 granted a charter giving both royal protection and wide-ranging privileges. The the church and hospital to be free from taxes, it was able to recruit its own constable – medieval and early modern London was a mad web of weird liberties and jurisdictions. Rahere was the first prior, and died somewhere between 1143 and 1145. He has pride of place in a tomb – though it was made in 1405, so probably not a good likeness. There are no bladders left lying around, in case you are wondering.

He left the legacy of this lovely church. He also of course left the legacy of St Batholomew’s hospital, which is another story entirely, one of London’s great modern hospitals. It’s the oldest hospital in England still providing a complete range of services, the place where William Harvey carried out his work on the circulation of the blood in the 17th century.  And it might have disappeared along with the priory; but instead it was re-founded as a hospital by Henry VIII in 1546, granted by him to the Corporation of London. 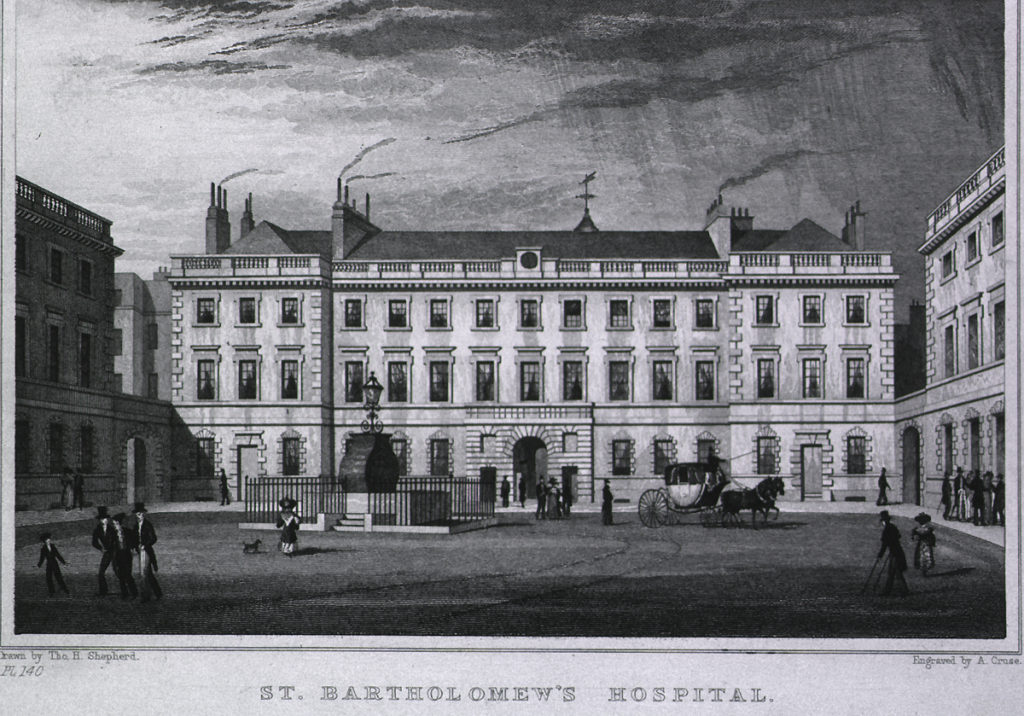 So there we go, all that from one haphazard foot fall through an old looking gateway off a busy market place. If you do happen to be reading this and want to visit, go to the website of St Batholomew the Great where all will be revealed.

19 thoughts on “St Bartholomew the Great”