This is a resource to support episode 348 about the Elizabethan and Jacobean Great Houses of the nobility and Gentry but I hope is of general interest. You might also like its sister article on W G Hoskins’ Great Rebuilding of vernacular architecture.

The Medieval Castle and House

The Medieval House developed from the traditions of the castle, and retained many of its features. They were inward looking, a strong element of defence based around  courtyard and hall. Often unlike the example of Warkworth, kitchen and other buildings might be separate from the hall. 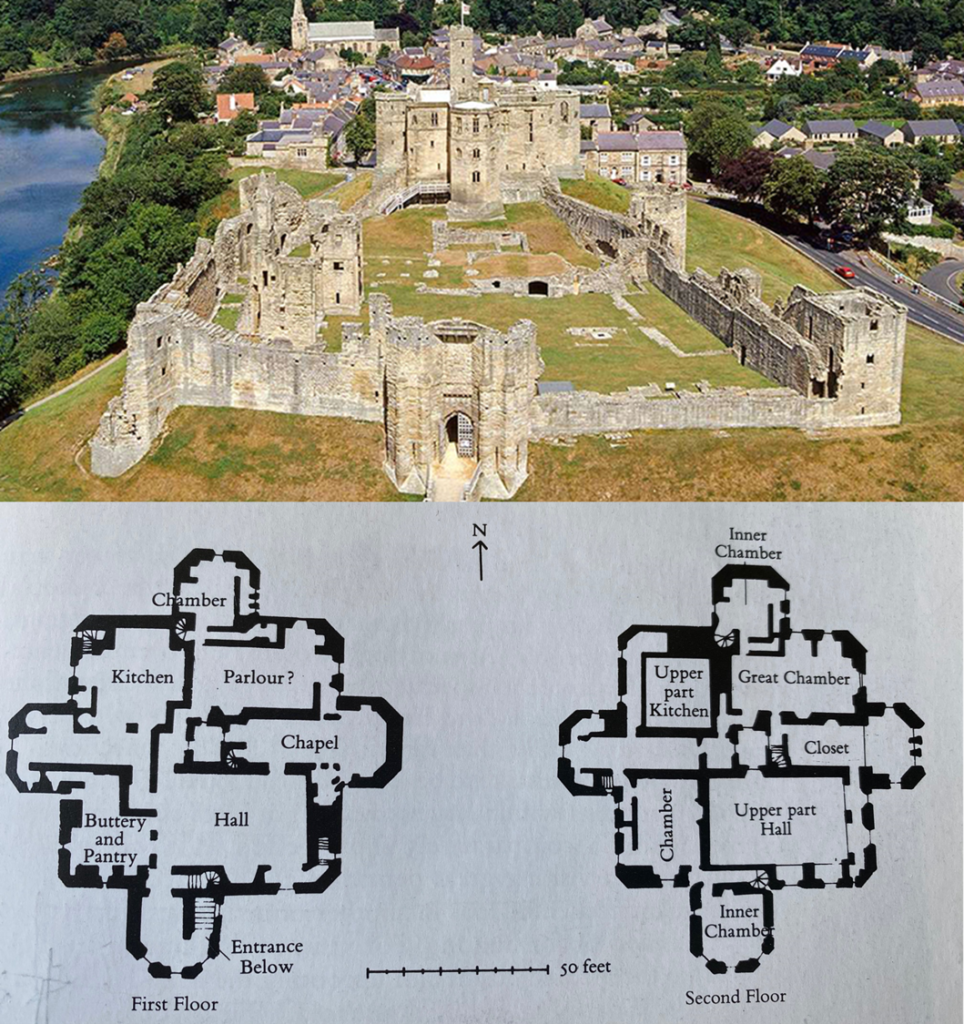 By the late middle ages, things had moved on; the great Keep had been banished by more advanced military design, comfort and privacy were more important, brick was becoming cheaper and  more available

Little remains of Margaret Beaufort’s late medieval palace at Woking but a floor plan illustrates something of the layout – though the image isn’t great, sorry about that. But you can probably discern a Gatehouse, courtyard, and Great Hall. Behind the Great hall is another smaller hall (with bold outline), with associated chambers; the smaller hall could be small and snug for winter – for to use as lodgings for illustrious visitors. The site also the importance of the immediate grounds – producing produce for the household, herbs and vegetables, fish from the ponds. 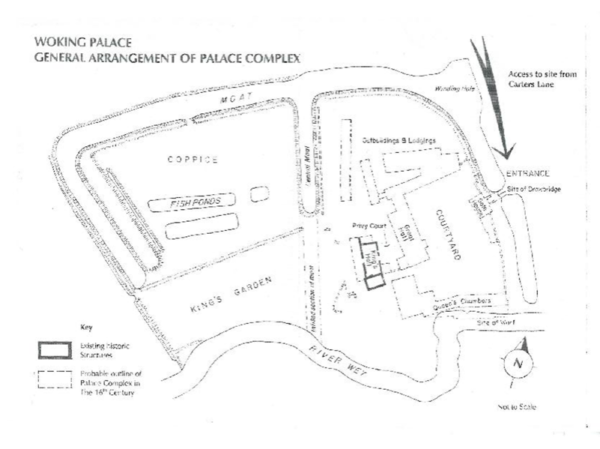 The Transition to the Prodigy Houses 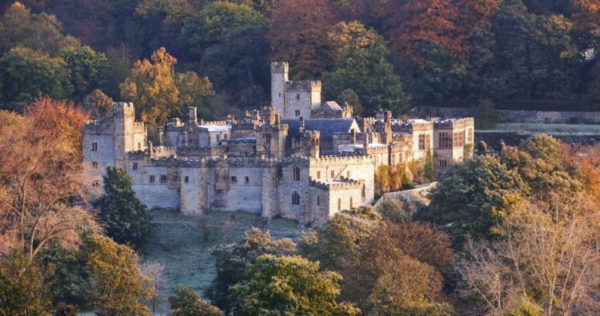 Haddon Hall is, I think on balance, my favourite stately home of all. One of the reasons for that is that it completely lacks the kind of pompous symmetry and grandeur of a Chatsworth,  or a Longleat; the bloody Palladians and Baroque merchants haven’t got their hands on it. Haddon is a grand house that has evolved over time to the 17th century and shows the transition from medieval to Jacobean. The Floor plan below shows the core medieval house I have boxed, with Great Hall at it’s heart; the house plan is still around a courtyard. Over the the east (top left) you can see the attempt to squeeze Haddon into the latest paradigm, with the addition of the all important Long Gallery. 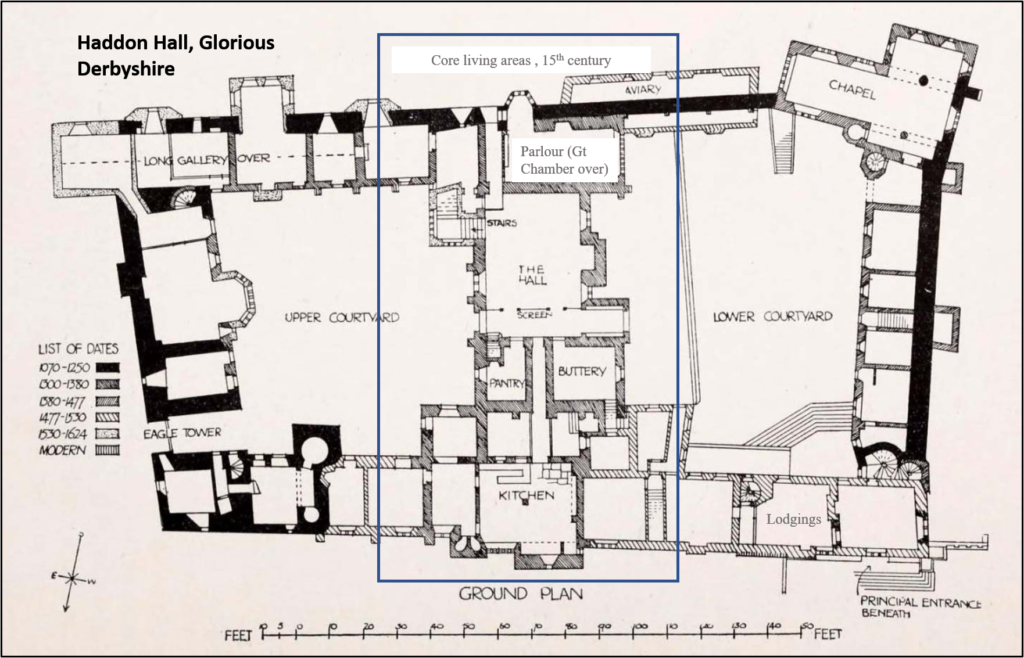 You can’t do much better than Bess of Hardwick’s triumph, started in the 1590s – Hardwick Hall (more glass than wall). Symmetrical, everything on one compact floor plan, acres of glass. The hall remains, but no courtyard, the Great Chamber has appeared, with a long Gallery on the top floor. The turrets are topped with banquesting rooms to fill the void after dinner. Appartmwnts and bedchambers on the top floor. Beautiful, imposing.

The gentry had a similar windfall to the rest of the landed classes. Their means varied very widely – at the top end, families like the Phelips had wealth to compete with the lower levels of their peerage, down to a level of a successful yeoman farmer. At the highest level were houses like Montacute (below) and Wollaton House. But the normal model was much more limited in aim and execution. The Gentry’s aim was usually to project their local power and leadership, rather than competing with court; their budgets usually only stretched to the cheaper local materials, and their educational horizons and experience didn’t really extend to the very latest thinking.

Stokesay castle is a perfect example – a fortified Manor House, with a lovely Gatehouse and courtyard. By the time it began to be forgotten and deteriorate from the 18th century, it had acquired a solar, a private area for the family with some privacy.

Built by Edward Phelips, a successful lawyer at court, this was his new dynasty’s bid for the status of nobility. It has most of the trappings of the prodigy house, built in stone rather than ourely local materials – but without quite the size and magnificence. It pretty much ruined Phelips – or at least his heirs. He left £12,000 worth of debt, about £1.6m today. 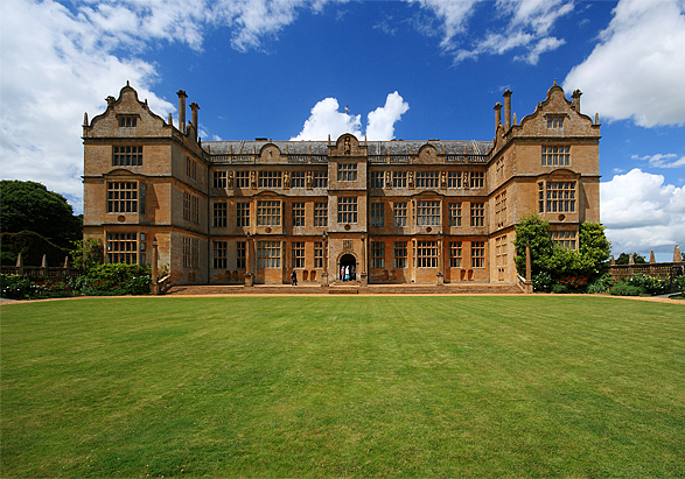 The Hall is a fantastic confection. Its orgins may go back to the 13th century, but rebuilding and extension of it happened in earnest from the early 15th century. Essentially the family kept decorating with as much expense as they could – which mainly consisted of more wood – but using local materials; so again, based around timber. They tried to keep up with the aristocratic Joneses, the apogee of which was the adding of the Long Gallery by 1610. There it perches on the top, leaving you with the question – how on earth doesn’t the thin fall over? 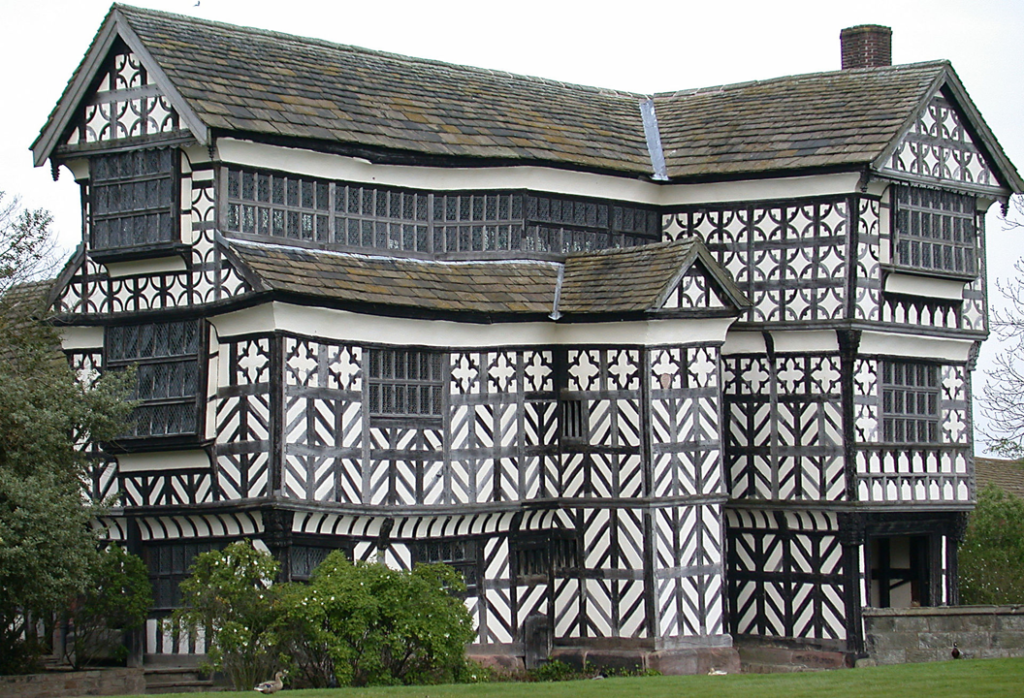 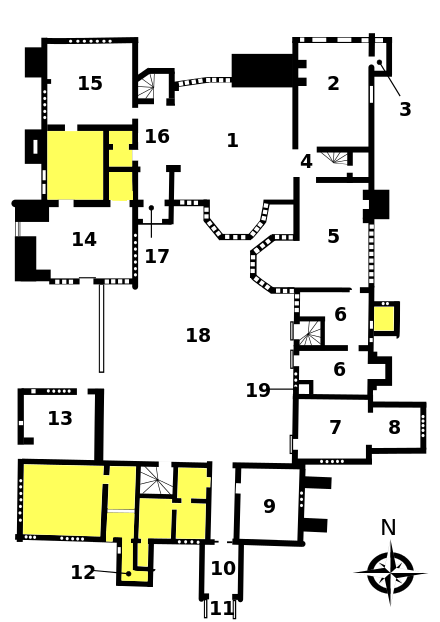 2 thoughts on “The Elizabeth and Jacobean Great House”