Skip to content
You are here
Home > Resource > The Great Rebuilding

W G Hoskins was a wonderful landscape historian, who produced a deeply influential work, ‘The Making of the English Landscape’ in 1954, among many other inspirational publications. He also coined a phrase – the Great Rebuilding, that various economic and social changes led to the development of vernacular architecture and buildings between 1550 and 1650.

These are some examples and explanations of the changes Hoskins was talking about. It is intended also  to support podcast episode 347 on the Great Rebuilding, where you can find out more!. There are some pictures and layouts below for your  interest, to bring the subject to life, and this page focuses on the Great Rebuilding. There is a sister page on the houses of the Gentry and the Prodigy houses of the Magnates, just ‘cos I didn’t want each article to, you know, outstay their welcome. 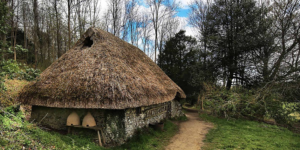 Although we think that we are still connected to the landscape of England’s past – in fact it’s not really true. Although some buildings survive from the middle ages, they are very much the smarter sort, even the smallest cottage. Since the 1930s, our rural society has been transformed out of all recognition. So let’s start there. Here is an image from the Weald and Downland Living Museum of a 13th century rural dwelling. Most villages in Eng;and would have been dominated by similar hovels, of even more lamentable condition, right up the end of the 19th century. Doesn’t do to romanticise the past. It was cold, usually damp and you stood a good chance of dying young. This cottage had a main room with an open hearth although it had the sophistication of an oven too.

W G Hoskins is the grand old man of English landscape history, who lit a fire om the subject. much of his work has been updated, replaced and so on as happens, but despite multiple slings and a significant quantity of arrows, one of his grand narratives, the Great Rebuilding, still survives – much battered. This was that a multitude of factors – technology in the form of cheaper glass and brick, economic in the form of the growing wealth of anyone with land, population growth, growing urban commerce – all led to the widespread upgrading of buildings across England around 1580 – 1650. Other factor have been added, such as cultural change, and the timelines fiddled with – but the narrative survives. 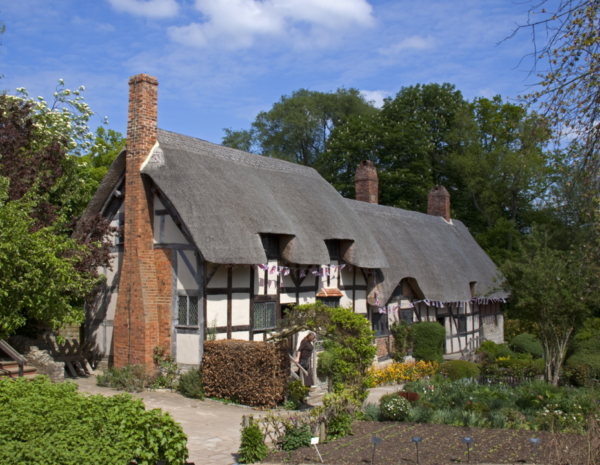 This is Anne Hathaway’s cottage and it’s a rather good example of Hoskin’s hypothesis. Originally, the yeoman’s cottage (so already of the ‘better sort’) was probably the further away lower section composed mainly of a hall and a single level, maybe a loft – no chimney. Somewhere around 1610 probably the larger section was built and the whole building transformed. And oh the luxury! Two floors, the top floor connected along it’s length, stair cases, a brick chimney, glazed windows – warmer, more privacy, lighter, far less smokey.

Such developments were not even – some people could only do part of it. Here is Pendean Farmhouse 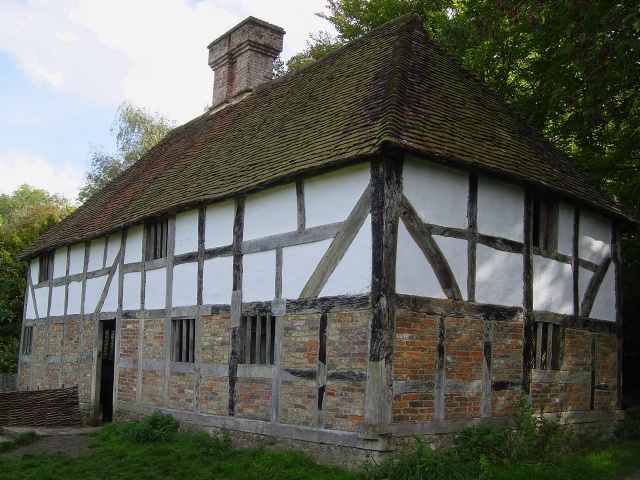 The Pendean farmhouse is preserved at the  Weald and Downland Living Museum at Chichester.  It shows a stage in the development of the Yeoman’s dwelling – extended, brick chimneys – but no nice large windows with glazing yet. 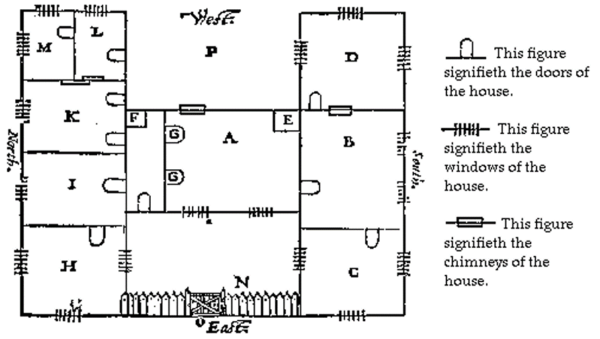 By the 17th century the ambitions of Farmers, Husbandmen and Yeoman was growing Here is a description of farmhouse of the aspiring Yeoman, from Gervase Markham’s plan of a ‘plaine country mans house’ from the ‘The English Husbandman’ (1613)

You can see there’s a courtyard structure (P), a hall, smaller storage and functional rooms on the left wing, and larger reception rooms on the right. Thus the Yeoman family would have comfort, privacy, functionality – and entertain, and cut a dash in their community.

Hoskins concentrated on rural England, but much work has been done since on Towns, and it seem apparent that the same sort of developments went on, There were broadly two types – the townhouses of the grand Gentry and nobility; and the merchants’ houses.

The major landowning classes and nobility didn’t make many concessions to urban living. 17th century London for example was festooned with manor houses just like their places back home. The vast majority of course have now gone, built over in the name of mammon. But here’s one surviving example from North Wales, Plas Mawr, Conway. As the plan shows, it still has it’s courtyard structure (D & H), a hall (F), Palour (A). 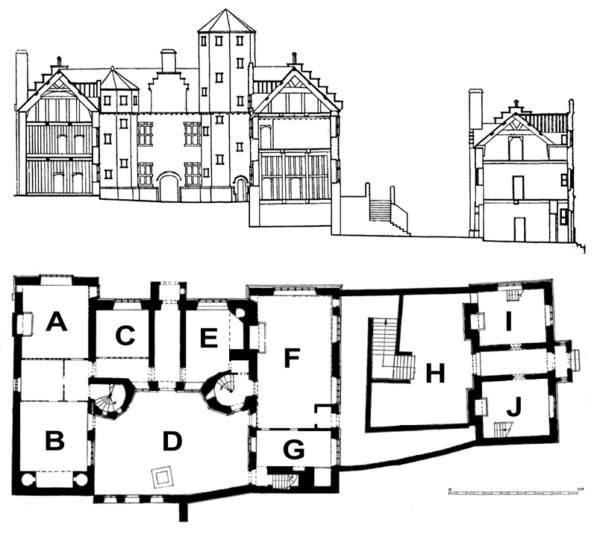 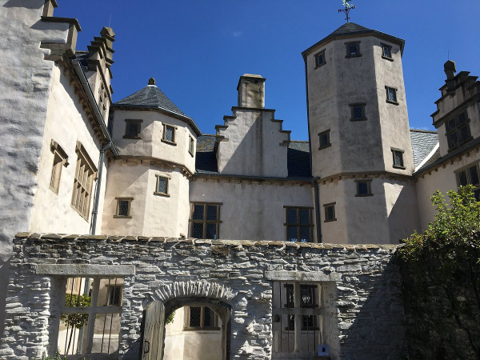 The town houses of merchants on the other hand most certainly did think about space – as well as function (running a business and selling stuff) and display (showing the world how important you were).

Here are two examples – the Harvard House in Stratford, and the Elizabethan Museum house in Plymouth. Houses went up – shop, parlour kitchen on the ground floor; grand reception rooms on the first floor, bedchambers next up and maybe the odd garret above that. Projecting levels to make the most use of space. Wood and wattle, display was limited to elaborate wood work. 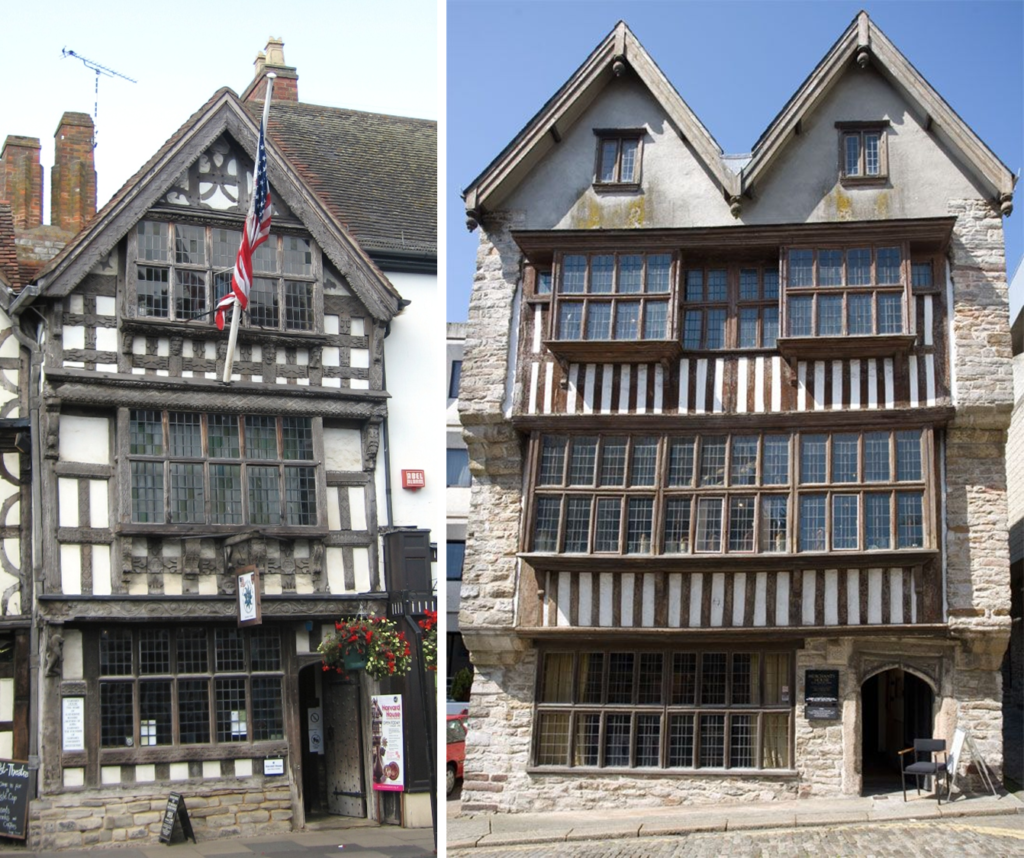 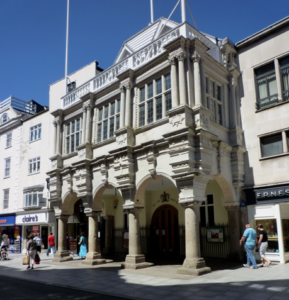 The number of incorporated towns grew like topsy during the period, and public town halls along with them. The new urban elite, merchant oligarchies often searched for a source of legitimacy. The Town Hall was one way, with administration building festooned with crests and pictures of town leaders. A good example is the very grand Guild Hall in Exeter – a building which reflects the latest classical architectural trends of the time, to advance it’s case for modernity and grandeur.

In other towns and parishes, the town hall was an opportunity for the local nobility to continue to assert their regional influence and traditional leadership, and they might sponsor the building of a town hall.

This held particularly true for the Catholic nobility. Often excluded from their traditional role of service to the monarchy, and banished from court, they searched for ways to proclaim the glory of their dynasty. Sponsoring town ha;ls was one way. Below are two examples. One is at Rothwell, covered with symbols of the local Tresham family, ,who became embroiled in the Gunpowder plot, in the Midlands rising through their brutal enclosures, and self combusted with wild spending. The other os the lovely much understated town ha;l in Watlington. Built of local Nettlebed brick, much more functional, and redolent of the other catholic noble response – much more quietist, remain relevant to the locality, build a catholic network keep your head down and wait for better times (though a son was at Basing House). The Camoys, are still with us at Stonor Park.

2 thoughts on “The Great Rebuilding”