Skip to content
You are here
Home > Resource > The Six Articles, 1539

From 1534 to 1539, the evangelical faction at court and church won a series of small changes in doctrine which moved the evangelical cause forward. Meanwhile the attack on the veneration of saints and relics, and the dissolution of the monasteries all gave the impression that religious reform had an unstoppable momentum. So the passage of the Act Abolishing Diversity in Opinions through parliament was a serious shock. 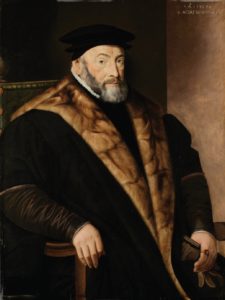 At parliament in April 1539, Chancellor Audley announced that the king was determined to put an end to the diversity of opinion and disunity, and appointed a group of clerics to produce a statement to end debate. In May, the Duke of Norfolk announced to parliament that the clerics had failed to agree and therefore that six questions would be put to parliament, debated and voted on. The questions were phrased so as to make disagreement difficult, and re-asserted a traditional position. The statements by Audley and Norfolk cannot have been made without the king’s permission and approval. They were duly passed in only slightly revised form.

Multiple worries were in Henry’s mind in 1539. The disunity and religious debate had been a continual worry for him, and conflicted with his vision of how a Prince should order the lives of his subjects – something had to be done to quieten debate. It is also probable that he was personally uncomfortable with the pace of change; on 4th April 1539, Easter Sunday, he very visibly carried out the most demonstrative of traditional ceremonies, the creeping to the cross, and very publicly received holy bread and water – all these were the targets of the evangelicals. Not least, though, was the diplomatic jam England was in. The two European super powers France under the Valois and Empire under Hapsburg had, exceptionally, come to an agreement. England was isolated diplomatically, and Henry genuinely feared invasion. It was time to convince Charles V the Emperor in particular that there was no religious reason for an invasion – that England was orthodox, despite the royal supremacy.

What was the reaction?

Evangelicals were shocked; the act was called ‘the whip with six strings’ Evangelical bishops Latimer and Shaxton resigned their sees. Cranmer debated furiously with himself – but did not 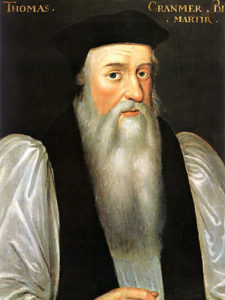 resign as Archbishop of Canterbury. He attributed to himself the worst possible motives, which was Cranmer’s style:

Happy man that you are…you can escape! Would that I were at liberty to do the same; truly my see would not hold me back. You must make haste to escape before the Island may be cut off, unless you are willing to sign the decree as I have done, compelled by fear – for I repent of what I have done, and had I known that my only punishment would have been deposition from the Archbishopric…of a truth I would not have subscribed

But Cranmer was also motivated by duty and loyalty – to his king whom he revered, and to his cause of evangelical reform, which would not have been helped by his removal. In fact, the act shocked evangelicals because they had become used to a series of small advanced to their views and a string of little victories; the six articles represented the end of the trend, rather than a backwards step.

Stephen Gardiner and the conservative bishops meanwhile rounded up evangelicals under the act – as many as 500, 200 of whom were ion London under the new Bishop of London, Edmund Bonner. Despite the undoubted atmosphere of suspicion, uncertainty and fear for which he was at least partly responsible, Henry was keen to minimise further upset; and issued a general pardon. Only 6 were to die under the (notably severe) penalties of the act.

The wording of the Act

Here it is in all it’s glory!

An Act abolishing diversity in Opinions

Where the King’s most excellent Majesty is by God’s Law Supreme Head immediately under him of this whole Church and Congregation of England, intending the conservation of the same Church and Congregation in a true, sincere, and uniform doctrine of Christ’s Religion, calling also to his blessed and most gracious remembrance as well the great and quiet assurance, prosperous increase, and other innumerable commodities which have ever ensued, come, and followed of concord, agreement, and unity in opinions, as also the manifold perils, dangers, and inconveniences which have heretofore in many places and regions grown, sprung, and arisen of the diversities of minds and opinions, especially of matters of Christian Religion.

And therefore desiring that such an unity might and should be charitably established in all things touching and concerning the same, as the same, so being established might chiefly be to the honour of Almighty God, the very author and fountain of all true unity and sincere concord, and consequently redound to the common wealth of this his Highness’s most noble realm and of all his loving subjects and other resiants and inhabitants of or in the same: Hath therefore caused and commanded this his most high Court of Parliament, for sundry and many urgent causes and considerations, to be at this time summoned, and also a Synod and Convocation of all the archbishops, bishops, and other learned men of the clergy of this his realm to be in like manner assembled.

And forasmuch as in the said Parliament, Synod, and Convocation there were certain articles, matters, and questions proponed and set forth touching Christian Religion The King’s most royal Majesty, most prudently pondering and considering that by occasion of variable and sundry opinions and judgments of the said articles, great discord and variance hath arisen as well amongst the clergy of this his realm as amongst a great number of vulgar people his loving subjects of the same, and being in a full hope and trust that a full and perfect resolution of the said articles should make a perfect concord and unity generally amongst all his loving and obedient subjects; Of his most excellent goodness not only commanded that the said articles should deliberately and advisedly by his said archbishops, bishops, and other learned men of his clergy be debated, argued, and reasoned, and their opinions therein to be understood, declared, and known, but also most graciously vouchsafed in his own princely person to descend and come into his said high Court of Parliament and Council, and there like a prince of most high prudence and no less learning opened and declared many things of high learning and great knowledge touching the said articles, matters, and questions, for an unity to be had in the same.

Whereupon, after a great and long deliberate and advised disputation and consultation had and made concerning the said articles, as well by the consent of the King’s Highness as by the assent of the Lords spiritual and temporal and other learned men of his clergy in their Convocation and by the consent of the Commons in this present Parliament assembled -it was and is finally resolved, accorded, and agreed in manner and form following, that is to say;

And be it further enacted… that if any person or persons… contemn or contemptuously refuse, deny, or abstain to be confessed at the time commonly accustomed within this realm and Church of England, or contemn or contemptuously refuse, deny, or abstain to receive the holy and blessed sacrament above said at the time commonly used and accustomed for the same, that then every such offender.. shall suffer such, imprisonment and make such fine and ransom to the King our Sovereign Lord and his heirs as by his Highness or by his or their Council shall be ordered and adjudged in that behalf; And if any such offender … do eftsoons… refuse… to be confessed or to be communicate… that then every such offence shall be deemed and adjudged felony, and the offender… shall suffer pains of death and lose and forfeit all his… goods, lands, and tenements, as in cases of felony.