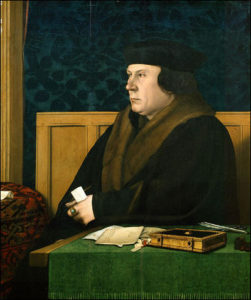 Thomas Cromwell was a brutal enforcer to a tyrannical king; an unscrupulous, ambitious, ruthless and corrupt politician, who cared nothing of the policy he implemented as long as it made him rich.

This is a Cromwell that Catholics in the immediate aftermath of Henry’s reformation would have recognised, a vision articulated by Cardinal Reginald Pole (1500-1558). For Pole, Cromwell was just one of the jackals that surrounded the throne, feasting on the flesh of the church mad with lust for power and riches:

Pole needed Satan in the story – both to emphasise Cromwell’s evil nature and actions, and to explain how someone of such low birth could have got to where he had, against all the natural laws and the great chain of being. Pole’s narrative was picked up and expanded, by following Catholic writers Nicholas Sander (c.1530-1581) and Robert Persons (1546-1610), though they accept that maybe Cromwell had a genuine interest in promoting evangelism.

And although we have no words from Hans Holbein, it is difficult to read his portrait in any other way than a heavy, joyless, bureaucrat.

Cromwell was one of England’s finest statesman, who while being at times ruthless, worked with tireless skill and innovation to build a modern, integrated and powerful king and kingdom, and advance the cause of a reformed religion.

Meanwhile, though in England it was John Foxe (1516-1587) that created the story that would dominate the English view. For him, Cromwell’s whole life

Between the 16th and 19th centuries this was broadly how the story went; a negative Catholic view, and a triumphant English, Protestant one. 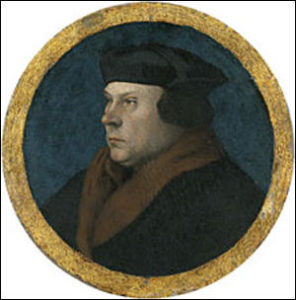 The 19th century saw a more nuanced story – which was bad news form Cromwell’s reputation. The Romantic movement and the movement for Catholic emancipation saw Cromwell castigated for the destruction of the monasteries. Radicals like William Cobbett (1763-1835) condemned Cromwell for being part of a greedy grab for wealth on the part of the evil rapacious Henry and his evil and rapacious nobility. For Cobett, ‘the brutal blacksmith’ was:

James Froude, a committed Protestant who rather unconvincingly presented Cromwell as a single minded religious reformer, and the architect of England’s transformation, rather than Henry VIII:

But by and large Cromwell’s reputation fell into the dark side. A F Pollard (1869-1948) saw Henry VIII as a mastermind, and Cromwell was not to get in the way of that viewpoint. R B Merriman (1876-1945) described a minister who was a wholly secular figure, with no redeeming evangelical principles, the subservient hireling of a despotic king, intent on nothing but raising the crown

Into this walked G R Elton and his 1953 Tudor Revolution in Government. Elton argued that Cromwell planned and introduced a new model of government, no longer controlled by the king through the royal household, but directed by bureaucratic departments of state. A Government enriched and empowered by the dissolution, and building a modern relationship between the centre and the regions, sweeping away the old franchises and local liberties that stood in the way of a single integrated modern state.

‘Wherever one touches him, one finds originality and the unconventional, and his most persistent trait was a manifest dissatisfaction with things as they were … he remained all his life a questioner and a radical reformer’

Even more, Elton has Cromwell working to a master-plan, a grand strategy. Elton’s thesis has not really survived, or not in its entirety anyway; these days Cromwell’s evangelism is stressed more strongly, alongside his desire to serve the king. But there have nonetheless been plenty of historians prepared to fight his corner. J J Scarisbrick’s 1968 biography of Henry VIII is still often quoted as the definitive work. He paints a picture of a king in control of strategy through his reign; none the less, he accords Cromwell a starring role

‘Far from being the ruthless Machiavellian of legend, Cromwell was a man possessed of a high concept of the ‘state’ and national sovereignty, and a deep concern for Parliament and the law; an administrative genius; one who may have lacked profound religious sense (though instinctively favourable to some kind of Erasmian Protestantism), but something of an idealist nonetheless. That the 1530s were a decisive decade in English history was due largely to his energy and vision.’

B W Beckinsale in 1978 painted a generally positive picture of a reforming minister and rational reformer with a passionate distaste for superstition and treason; and quoted Archbishop Cranmer for a final assessment:

‘such a servant, in my judgement, in wisdom, diligence, faithfulness and experience, as no prince in this realm ever had’

But generally in the more popular view, it is the brutal, corrupt thug that has defined his reputation in more recent times. Here is Alison Weir:

‘To great intelligence and ability Cromwell added a complete lack of scruple… his unattractive personality…would …make him essential to the King. Unscrupulous and efficient, his spy network…was to become a model for future governments.’

And a recent biographer, Robert Hutchinson:

‘an ambitious and totally corrupt statesman… an opportunistic jack-the-lad, a ruffian on the make’

Hilary Mantel’s books have therefore transformed his reputation; she depicts him as a sensitive gregarious, talented conscientious family man, determined to serve his king. Along the way, she has also painted a negative picture of Thomas More, and together this has sparked a response. The excellent Spartacus Educational site quotes a couple of these. Firstly, the Catholic Bishop of Shrewsbury, Mark Davies:

‘It would be sad if Thomas Cromwell, who is surely one of the most unscrupulous figures in England’s history, was to be held-up as a role model for future generations.’

Secondly, by Melanie McDonagh in the Evening Standard had an interesting theory as to why Cromwell’s reputation may be in a more positive phase:

the Thomas Cromwell that Hilary Mantel depicts is infinitely attractive: secular-minded, tolerant, contemptuous of superstition, sneery about religious credulity, a meritocrat of humble origins, fond of children and animals, multilingual, handy in a fight. Indeed, if the prevailing mindset in Britain right now is a kind of secular Protestantism then Thomas Cromwell as drawn by Hilary Mantel is its man.

There is one thing all these commentators agree on is that the 1530’s were a decade that changed England forever; and for good or ill Thomas Cromwell was a leading architect of those changes.

6 thoughts on “Thomas Cromwell and his reputation”