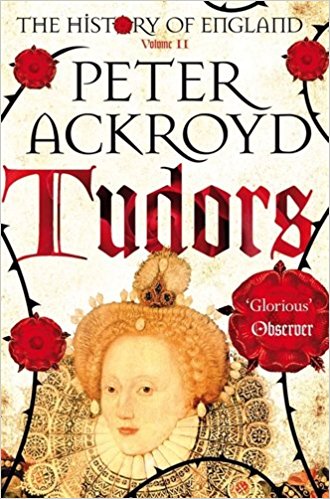 Tudors: The History of England from Henry VIII to Elizabeth I
Peter Ackroyd
History
Pan
2012
528

Rich in detail and atmosphere and told in vivid prose, Tudors recounts the transformation of England from a settled Catholic country to a Protestant superpower. It is the story of Henry VIII's cataclysmic break with Rome, and his relentless pursuit of both the perfect wife and the perfect heir; of how the brief reign of the teenage king, Edward VI, gave way to the violent reimposition of Catholicism and the stench of bonfires under 'Bloody Mary'. It tells, too, of the long reign of Elizabeth I, which, though marked by civil strife, plots against the queen and even an invasion force, finally brought stability.

Above all, however, it is the story of the English Reformation and the making of the Anglican Church. At the beginning of the sixteenth century, England was still largely feudal and looked to Rome for direction; at its end, it was a country where good governance was the duty of the state, not the church, and where men and women began to look to themselves for answers rather than to those who ruled them.

“Tudors” is the second in Peter Ackroyd’s History of England which has now reached 4 books and 1815. Ackroyd is a biographer, journalist, poet, historian and all of this shows in this book. It shows through his erudition and breadth and depth of his knowledge; but most of all it shows in the quality of the writing, in both style and content. Worth noting that the book covers Henry VIII to Elizabeth, not Henry VII.

Now, I have to admit that I started off prejudiced against the book, so the fact that I have ended up recommending this should be taken as extra impressive! The first volume, ‘Foundations’ had been guilty of not taking my beloved medieval history seriously enough in my humble opinion, since it was less than 2 billion pages long.  Possibly unfair of me.

There is no doubting the erudition of Peter Ackroyd and this book. There is also no doubting the quality of the writing which is fluid, engaging, succinct. He makes very good choices in where he concentrates and goes into further depth, or at least I think so, and doesn’t shy away from difficult and complicated topics like the doctrinal issues of the reformation.

Before I go on with praising the lad, let me get the criticisms out of the way; which I think is common to more of the more popular historians; he cannot resist the sensationalist, bold statement, designed to capture interest and prove his worthy radicalism. It’s a disease. Let me give you an example. In Chapter 12, he writes, of Henry VIII

‘The king had shown his true colours. He was not in the least evangelical. He only wished to augment his revenues, with the treasure of the old church, and increase his power”

This is highly contentious, and needed explanation, defending or explaining. Certainly Scarisbrick, whose work is still an acknowledged authority on Henry VIII, wrote

“That Henricianism was merely ‘Catholicism without the pope’ will not do.”

Plus, a few pages later when talking about Edward VI’s tutors, Ackroyd  writes they they ‘seem to have trodden the same middle path in religion as Henry himself’. Hang on – I thought we were saying Henry was not in the least evangelical, so what’s this middle way thing then?

So that’s out the way then! The real triumph of Peter Ackroyd are the stories with which he chooses to illustrate the book. They are works of genius, they serve to bring home the reality of the history and events and allow you to grasp them; or simply to keep you interested and engaged. There is a wonderful story for example, of Archbishop Cranmer’s servant taking his master’s (legally heretical) objections to the 6 Articles to Henry VIII by boat, and being disturbed, if that’s the word, by a fleeing Bear,. The servant  has to abandon the book, and it falls into the wrong hands until Cromwell retrieves it.  It’s a great story – it’s funny, exceptional, serves to illustrate the fear and uncertainty caused by Henry’s doctrinal wanderings, and illustrates the importance of relationship in power and Cromwell’s importance to the evangelical cause.

It’s a really good read – it’s not trivial or short, but it flies by.

2 thoughts on “Tudors by Peter Ackroyd”