With the arrival of the 1380s, a reaction was in train in Oxford. The  new Chancellor, William Barton was an old friend of Wycliffe – but friend he was no longer. Wycliffe spent the last few years of his life in exile in Lutterworth, and by 1384 he was dead.

123 Wycliffe and the Lollards

The tradition source of the word Lollard is from the Dutch to mumble. Wherever it came from it probably wasn't complimentary. But despite Wycliff's lack of interest in starting a new religion, a reformed religion did appear. It's profile basically followed the success of local preachers. The map below from Wikipedia shows how it spread. 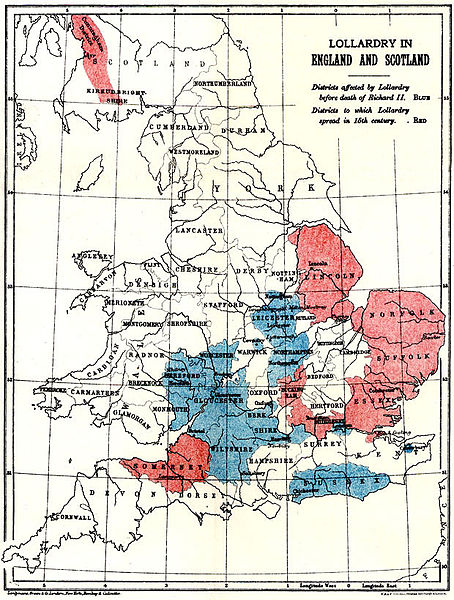 By and large before 1400 supression was slightly piecemeal. But Archbishop Courtenay and Oxford Chancellor Barton at least made sure Academic debate was expelled from Oxford. In the new century, Archbishop Arundel was to be more thorough.

Was translated from the Latin Vulgate version, rather than the original hebrew; some of its wording, especially the Early Version is clumsy, since it translates word for word. It has therefore had less attention than Tyndale's Bible, but its popularity was enormous, and over 250 copies remain to this day.

The use of English

The determination to use an English version of the bible reflected the resurgence of English. It was nw the only language everyone had in common, and French was learned as a second language by the children of the nobility. And so Langland, Gower, Chaucer – all wrote in English becuase they would that way attract the greatest audience.

The same applies to the poet of the Pearl – which can be found in the original and translation here.

3 thoughts on “123 Wycliffe and the Lollards”