Skip to content
You are here
Home > Podcast > 232 Evangelicals 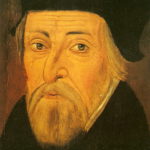 From the mid 1520s, the church authorities began to face a more serious challenge from evangelicals like Thomas Bilney and Hugh Latimer. And in 1526 and 1534, Tyndale’s New Testament in English transformed the situation.

Mark dropped me a note and told me that you can listen to an Audio clip of Tyndale’s translation read in the original pronunciation. Listen to the sample  clip.

The career of Hugh Latimer is a good example of an evangelical preacher. Latimer is the man beloved of Economic historians, since he provided the sweetest and most succinct description of a Yeoman:

‘My father was a yeoman, and had no lands of his own, only he had a farm of three or four pound by year’ where he tilled enough to keep ‘half a dozen men’. In addition to a ‘walk for a hundred sheep’ his mother kept a dairy and ‘milked thirty kine’

He came from Thurcaston in Leicestershire, right in the middle of England. Latimer was one of those who met at the White Horse pub in Cambridge, which became known as ‘Litle German’, converted by Thomas Bilney. Latimer explained how he changed his views, and it is an example of one way in which some changed their views:

Master Bilney, or rather Saint Bilney, that suffered death for God’s word sake, the same Bilney was the instrument whereby God called me to knowledge; for I may thank him, next to God, for that knowledge that I have in the word of God. For I was as obstinate a papist as any was in England, insomuch that when I should be made bachelor of divinity, my whole oration went against Philip Melancthon and against his opinions. Bilney heard me at that time, and perceived that I was zealous without knowledge; and he came to me afterward in my study, and desired me, for God’s sake, to hear his confession. I did so: and, to say the truth, by his confession I learned more than before in many years. So from that time forward I began to smell the word of God, and forsook the school-doctors and such fooleries.

Latimer became one of the greatest evangelical speakers of his age. Like many of his fellows, while he took enormous risks in his peaching, when questioned he twisted, and turned and equivocated to avoid being silenced or burned. So for example; in 1525 the Bishop of Ely came unannounced to Cambridge to hear Latimer preach in the university church, no doubt hoping to catch the lad red handed. Seeing him enter, Latimer changed his text, and preached a sermon extempore At the end, the bishop thanked Latimer, and asked him to preach against Martin Luther’s doctrine. The quick thining Latimer replied that he could not refute what he was prohibited from reading. The bishop muttered darkly “I perceive that you somewhat smell of the pan, Mr. Latymer; you will repent this gear some day.”

In 1531, Latimer acquired a protector in the form of Anne Boleyn, who gave him a living in Wiltshire in the West Country He used it as a springboard to preach more boldly, and on 11 March 1532 he was caught and called before convocation to face charges that he had impugned purgatory, prayers for the dead, the intercession of saints, pilgrimages, fasting, and the veneration of the crucifix and other images. Latimer appealed to the King as the highest authority under God; he was excommunicated and imprisoned, and forced into a full recantation; but his loyalty to the king won his release in April.

In 1533, Latimer grew bolder still, and recorded a famous triumph in a series of radical sermons at Bristol resulting in accusations that he’d done as much damage as Luther. Words such as these caused an enormous stir:

‘Dead images are not to be prayed unto; for they have neither ears to hear withal, nor tongue to speak withal, nor heart to think withal … . They can neither help me nor mine ox; neither my head nor my tooth; nor work any miracle for me … I would not have them so costly and curiously gilded and decked … . The blood of martyrs has no effect upon the way of redemption. We may pray to God ourselves without making suit first to them.’

All of this must have produced a mixture of exhilaration and terror as the old order was threatened, and in return threatened death; a flavour comes across when in 1535 Thomas More saw Latimer in a high-spirited moment in the garden of Lambeth Palace. Latimer was ‘very merry’ and laughing as he cast his arms around Cranmer’s chaplains in triumph. By 1536, Latimer was Bishop of Worcester and More was dead; but .the evangelical cause was very far from won, and Henry’s views would change with bewildering complexity. In 1539, Latimer would be removed as Bishop of Worcester, and be thrown into the Tower.