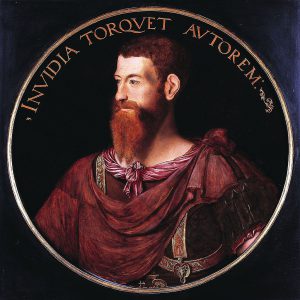 This list was printed in a book by William Maziere Brady (1825–1894) an Irish priest and journalist. Brady had been an Anglican priest in Ireland, but when the Church of Ireland was disestablished in 1869, he went to the Vatican to work amongst the archives there. He subsequently converted to Roman Catholicism, and wrote a number of polemical works against the narrative of the Anglican church in Ireland. One of his publications was called the ‘Episcopal Succession in England, Scotland, and Ireland, A.D. 1400 to 1875’, and the list below comes from a document printed “found lately among some loose papers in the Archivio di Stato at Rome.”

The entry is reproduced in the peerless “Letters and Papers, Foreign and Domestic, Henry VIII,  and in is Volume 13 Part 2, August-December 1538 if you want to have a look. The list must have been produced between July 1538 and March 1539, after the young earl of Shrewsbury, Francis, succeeded his father, and before Thomas Boleyn Earl of Wiltshire died.

Now I was once the proud recipient of some training from the lovely Michael Barber (that, my friends, is called name dropping), and in that he made the point how important it is to have a quick, broad view of any situation however complex, to allow you to identify where to spend your time and effort. So I thought I might help Henry VIII out, and do a RAG status list of his peerage, so that he can see at a glance how he’s fixed in terms of blokes around he could reply on in a crisis, or likely to cause him grief. Obviously, it’s about 500 years too late, but hey, better late than never – and anyway, Thomas Cromwell probably had one of these pinned to his wall in Austin Friars. Plus you can link to the lovely Wikipedia to find out more about these folks if you wish.

The picture is of Henry FitzAlan 12th Earl of Arundel doing a bit of Cosplay as a Roman Emperor. Or maybe on his way to a Toga party – do people still do those?