Wolsey has had a hard time of it at the hands of the historians. This article gives a brief survey of his reputation through the ages, and is taken from the members only podcasts on Thomas Wolsey. If you want to hear more, click here to become a member.

Wolsey and the Historians 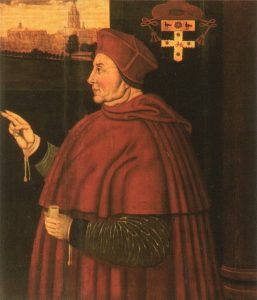 At his death in 1530, Wolsey was the man that everyone loved to hate, particularly his noble adversaries, who universally despised Wolsey for his lowly birth and success in direct contravention of the Great Chain of being.  There were, some, just a few, who looked at Wolsey with less jaundiced eyes. The Bishop of Lincoln for example, praised the fact that Wolsey took action against the enclosure of land, the enclosures that Thomas More complained about when he wrote that the sheep ate men.

There was never thing done in England more for the commonweal that to redress these enormous decays of towns and making enclosures.

Wolsey’s servants also tended to see the great man’s strengths, and feel an affection and loyalty to him. Thomas Cromwell was a famous example. Here’s a chap called Richard Moryson, a Yorkshireman who was a dedicated servant of the Cardinal:

Who was less beloved in the North than my lord Cardinal before he was among them? Who was better loved after he had been there a while?

We are also very lucky to have had the views of one of the Cardinal’s gentlemen ushers, a poet and biographer called George Cavendish. Cavendish wrote an enormously popular biography of Wolsey. Cavendish presented the cardinal’s life as an exemplification of the wheel of fortune.

Great wealth, Joy, triumph & glory … until Fortune (of whose favour no man is longer assured than she is disposed) began to work some things wrong with his prosperous estate through which she would devise a means to abate his high port.

And along the way, he had plenty good to say about Wolsey’s character, talents and achievements

I never saw this realm in better order, quietness and obedience than it was the time of his authority and rule; ne justice better ministered with indifferency.

But more most, Wolsey was a symbol of the abuse of power, of an outrageous greed for wealth, of the abuse of church privileges.  We might start with Thomas More. More sat on a King’s Council dominated by the Cardinal. Called a fool by Wolsey, More responded sarcastically ‘But God be thanked the king our master hath but one fool on his council’. He was also part of the faction that brought the Cardinal down, and celebrated his fall with the words ‘the great wether which is of late fallen’. His more measured judgement was to describe him as:

‘Vainglorious was he very far beyond all measure, and that was great pity; for it did harm and made him abuse many great gifts that God had given him’. 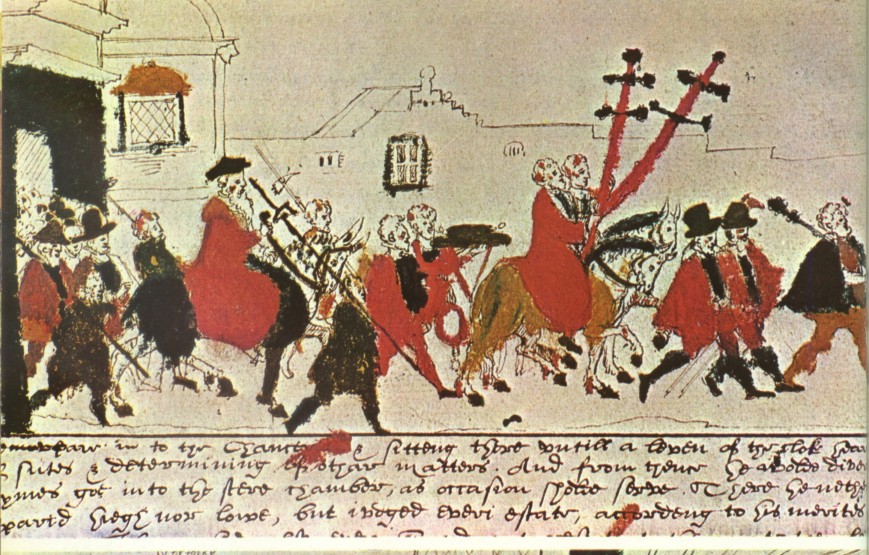 The vicious satirist and propagandist, John Skelton also had Wolsey firmly in his sights. Skelton at one time had been tutor to Henry VIII, and his comments on Wolsey are to be treated with great care. John Skelton was a pen for hire – at one stage he tried to hire himself out to Wolsey, and wrote some lines in his favour. But Skelton at very least gave articulation to a popular view of the good Cardinal. He captured all the aristocratic vitriol in the simple description of ‘the Butcher’s Cur’. He built a picture of a greedy, dominating man who set himself up as an alternative king. For example, in his complete control of the Court of Star Chamber:

‘…All matters there he mars; Clapping his rod on the board; No man dare speak a word…’

Even the king of France celebrated the fall of the baseborn and self-styled ‘arbiter of Christendom’:

‘he thought ever that so pompous and ambitious a heart, sprung out of so vile a stock would once show forth the baseness of his nature, and most commonly against Him that hath raised him from low degree to high dignity.’

If the nobility, traditionalists and supporters of Catherine of Aragon hated him, religious reformers were no more positive.  For William Tyndale, and later supporters of the protestant cause in exile, he was the epitome of the ills and failings of the Catholic church; enormously rich, a bloated figure gorging himself on the carcass of the material and political world, when he should have been reforming the church instead. The ‘wiley wolf’, ‘obsequious and serviceable’ was how Tyndale described him in 1530. Two protestant exiles wrote:

Alas since England first began,
Was never such a tyrant there.
By his pride and false treachery,
Whoredom and baudy lechery,
He hath been so intolerable
That poor commons with their wives,
In manner are weary of their lives

Edward Hall really put the boot in; his chronicle of 1547 has Wolsey as the great deceiver:

‘double both in speech and meaning. He would promise much and perform little; He was vicious of body and gave the clergy evil example.’

For Hall and for following generations of Catholic writers, Wolsey was to be condemned for his attempt to win the king his divorce. So now you can see the problem; poor old Wolsey did not have a 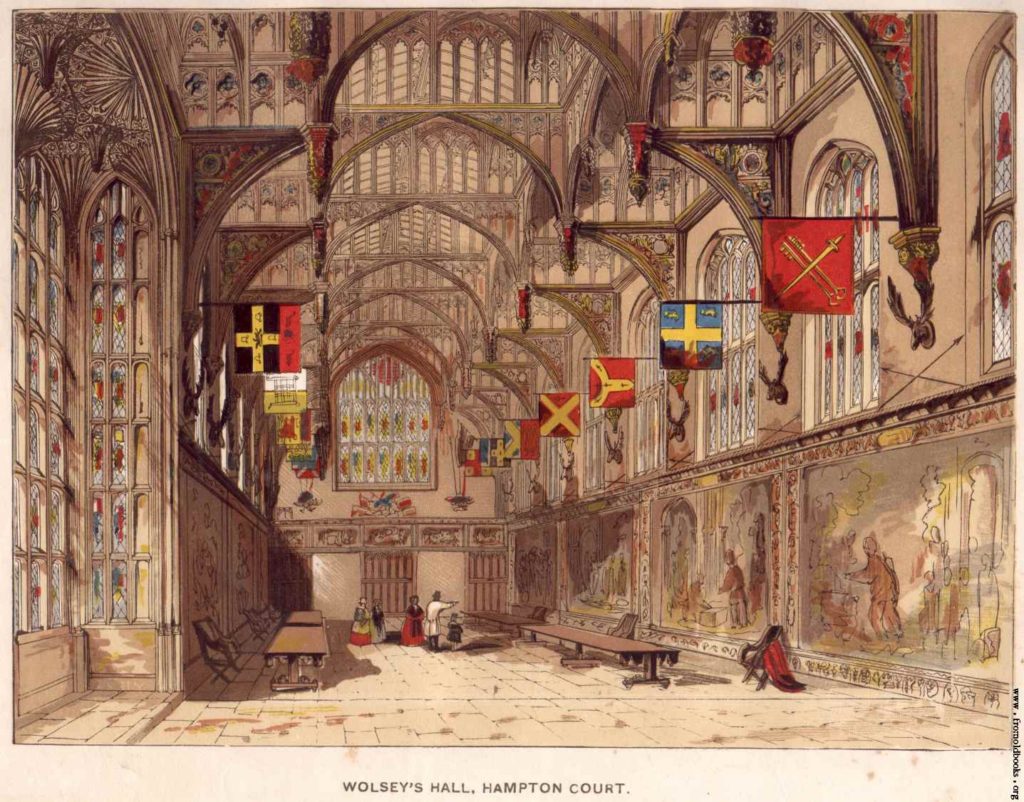 natural constituency of supporters. The Catholics hated him for helping the King get his divorce; the protestants hated him for being a bloated symbol of all that was wrong with the old religion. Vergil and John Foxe carried on the tradition, so did Holinshed, and in the 17th and 18th centuries so it carried on, including through the pen of Samuel Johnson. Wolsey’s reputation remained one of a man of cynical political manipulation in the pursuit of worldly pleasure, wealth and power, a career devoid of greatness or principle.

A spot of balance began to creep in during the 18th century, when a strand appears at least recognising that Wolsey was a statesman who managed to dominate politics for 15 years; and that surely we should at least try to recognise his political achievements. Richard Fiddes in 1724, wrote of the cardinal’s natural dignity of manners, and his intention to found a society of canon and civil law. And so we come, kicking and screaming into the 19th century where two instincts struggle with each other; on the one hand, Britain was becoming a world power and empire, and historians were keen to emphasise the talents of great men, and whether you like it or not, Wolsey was a great man. On the other hand, Britain was still fiercely protestant, and Wolsey was a catholic cardinal. So, in 1812 we have John Galt writing:

‘haughty, ambitious, masterly and magnificent, he felt himself formed for superiority and his conduct if not always judicious was uniformly great’

But we have J A Froude writing

a man who loved England well, but who loved Rome better

But as the nationalist urge became stronger, Wolsey was increasingly seen as one of England’s great statesman; and so on to the 20th century where A F Pollard’s biography dominated the debate. In Pollard’s view, Wolsey was primarily a cynically efficient administrator and power politician whose foreign policy was directed by the papacy. This is an interesting perspective; one of the debates about Wolsey is whether he formulated structured policies, in a way that would be recognisable to the modern world; it was even suggested that he recognised and pursued the concept of a balance of power – though now historians would deny as anachronistic. Pollard saw Wolsey as a bad loser and a born fighter; a man who ended up as a cleric not because he had a vocation but because it was the only available career path for the ambitious man – and Wolsey would hardly have been alone in that.

G. R. Elton minimised him, presenting him as an essentially medieval chancellor – and of course this against the backdrop of the man who would follow him, Thomas Cromwell, and be in Elton’s mind the great reformer who ushered in the modern age. Elton wrote that Wolsey was lucky to be included in a series called ‘Twelve English Statesmen’ ‘even as twelfth man’. Christopher Haigh saw a corrupt cardinal against whom, quote, ‘no charge was too gross to be impossible’ so that’s a little mean then; J. J. Scarisbrick was a bit more positive and revisionist seeing, quote, ‘something lofty and great about him’. P. J. Gwyn in 1990 described a man with no higher objective than to carry on the government, pursuing policies formulated by Henry VIII. In this we return to another theme of both Wolsey and Henry VIII’s career – who formulated policy, especially in the early years? Was it Henry, or was it his ministers?

David Starkey emphasised the Cardinal’s flamboyant political and managerial talent, and his dedication to Henry’s cause. He points out that Wolsey’s extravagent style was a feature of the time and appealed to Henry’s tastes.

‘He was and administrator of genius, an amateur lawyer of energy and originality, a diplomat of distinction, and a discerning as well as lavish patron of music, scholarship of the visual arts.’

This has become the theme – the consummate politician with talents to be admired, but no great claim to be a statesmen with a radical vision; a loyal servant of his master. John Guy also presents a balanced view of a statesman, again essentially medieval in character, in the sense that to talk of a foreign ‘policy’ or domestic ‘policy’ is an anachronism. He paints a picture of a hard working man, driven by serving a master in Henry whose expectations were unrealistic. To give Sybil Jack the final word:

‘Nor can there be any doubt about either his immense capacity for work or his skills as a negotiator (though he may well have been unduly reluctant to delegate). Even his enemies praised his ‘angel’s tongue’, his wit, and his judgement. But the principles that guided his actions are less clear.’

David Starkey ‘The reign of Henry VIII: Personalities and Politics’

Sybil Jack in  ‘The Database of National Biography’

2 thoughts on “Cardinal Wolsey and the Historians”