Skip to content
You are here
Home > Resource > Medieval Castles

Mention the Middle Ages and most people immediately visualize a great stone castle, surrounded by a sturdy moat, and protected by Knights on horseback and legions of spearmen. Castles are some of the most popular historic sites on Earth, and together with the great cathedrals are one of the most evocative features of the Medieval Age in Europe.

Castles exert a powerful hold on our imagination. They embody the romantic ideal of chivalry, of epic battles, of loyalty and personal sacrifice to crown and country.

First, we must understand that no two stone castles had the same layout, and every castle’s design largely depended upon the local landscape, skills, resources and the purpose and function of each castle.

Some castles were designed to culture an air of luxury and grandeur, while others were built for purely militaristic pursuits, with strong walls that could be easily defended and provide shelter for the local population.

Most medieval castles did share some common features, so let’s take a look at some of the most important aspects of stone castle construction. 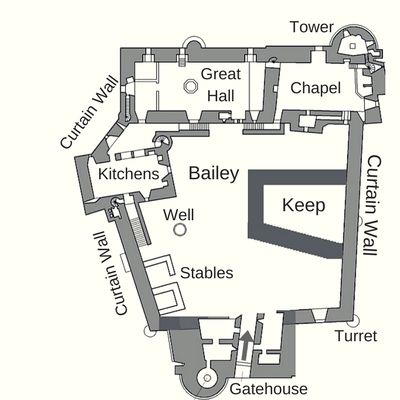 The keep was the heart of every medieval castle and the most strongly defended point before the introduction of concentric defense. The great innovation of stone castles was the replacement of the wooden tower of the earlier motte-and-bailey castle with a taller and stronger tower rendered in stone.

The keep was the residence of the lord who owned the castle and his family, but it could also be used by his guests or representatives. Stone buildings provided much more luxurious accommodation compared to the earlier wooden towers. They included grand fireplaces for heat and for comfort, larger and more comfortable rooms and better protection from the rain and cold.

In later medieval times, Castles began to transform into sumptuous buildings, and nobles began to live in more luxurious chambers, with the keep used exclusively as a stronghold.

Besides providing accommodation for the lords of the castle, the keep was also the last line of defense. The sheer thickness of the stone walls served as protection against siege engines such as catapults or trebuchets. In addition, stone keeps were usually tall enough to make scaling with ladders or movable wooden scaffolding difficult, while providing an excellent viewpoint for archers shooting at attacking raiders. 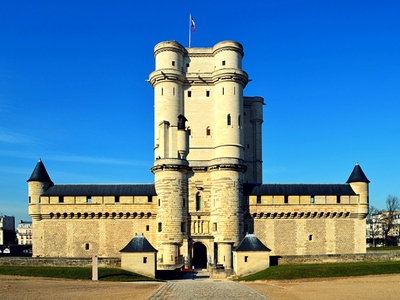 The keep was the heart of any stone castle and usually the first part to be built. Radiating out from it, we would find many other buildings and further fortifications.

The bailey was a fortified enclosure containing the castle’s domestic buildings. As opposed to early motte-and-bailey castles, where the bailey was normally surrounded by a wooden palisade, stone castles were protected by a thick stone wall, wrapping around the entire castle, and enclosing both the Keep and the Bailey.

While the keep was the residence of the Lord in charge, the bailey was the home of the rest of the Lord’s entourage that also needed protection. The bailey could contain many buildings such as the kitchens, the stables, the chapel, the bakery etc.

Water was supplied by a well or by a cistern. However, many times water was highly polluted and it was wiser to drink beer, which was sterilized during the brewing process. That is one reason why beer was so important in medieval life; in fact, many castles had their own breweries.

Next, let’s see some of the domestic buildings found inside the bailey.

Entertaining guests was an important part of the castle’s social life. Many nobles aimed to impress their guests and show of the castle’s grandeur, and large elaborate kitchens demonstrated a Lord’s wealth to his important visitors.

The most elaborate kitchens were set to cook the fish and the game that was caught when hunting in the castle grounds. This would have given the castle an additional prestige as hunting was a very popular activity.

The Great Hall was the focus of social life in any Medieval Castle. It was usually the largest and grandest room, where the Lord of the house held feasts and banquets in honor of his important guests.

When a great banquet was held, the Great Hall was carefully prepared to impress the audience. The guests of honor were seated in front of the hall, near the Lord of the castle and his wife. Seating arrangements were strictly controlled, with the most important guests seated closest to the Noble Lord. The further you were seated from them, the less important you were.

Horses were extremely valuable in Medieval times. They were essential in battle but also used as means of transportation and communication. A powerful Lord would have owned many war-horses. Large stables also included haylofts and space for the grooms to live and rooms where equipment was stored and basic repairs were undertaken.

The keep was the castle’s primary defense, but it was by no means the only one. Other fortifications were added to enhance the castle’s defensive capabilities and make an attack against it as difficult as possible.

If an attacked made it across the moat, they would then come up against the curtain wall. This wall usually wrapped right around the outside of the castle to protect all of the domestic buildings and the keep. Curtain walls had to be tall enough to make scaling the walls with ladders difficult and thick enough to withstand bombardment from siege engines.

A stone wall could have been as thick as 3m and as high as 12m, although sizes varied greatly between castles. To further increase the wall’s strength, the center of the wall was made using hard rocks and rubble, while the two outer parts were built by laying gigantic stones, similar to how bricks are laid today. The rubble was, therefore ‘sandwiched’ between the two layers of stone-wall and this increased the durability of the wall.

On top of the wall, walkways were designed to allow defenders to rain missiles on enemies below, while special stone-parapets (known as battlements) gave the defenders further protection from incoming arrows and other projectiles.

The Gatehouse was the weakest part in the defense of any castle. No matter how strong the outer walls were, attackers could always use the main route into the castle as the focal point of their attack.

Castle designers had to think of a way to overcome this major problem. Obviously, you could not build a castle without the main entrance, as people and supplies needed a way to walk in and out of the castle in times of peace.

Consequently, fortifications and obstacles were built around the entrance to medieval castles to deter attackers. To protect the entrance, defensive towers were built on each side of the gate. The passage through the gatehouse was lengthened and a series of defenses were designed inside the gatehouse to make a direct assault more challenging.

For example, a portcullis (which comes from the French word “porte coulissante”, meaning sliding door) was a wooden or (more often) metal grill which was lowered from the ceiling in front of the attackers to block the passage. A gatehouse could have been equipped with one or more portcullises. 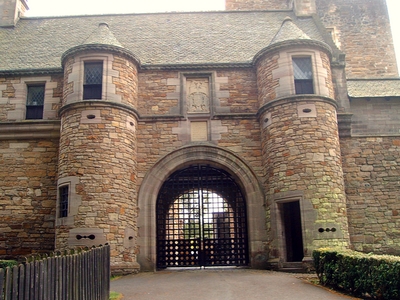 It was not uncommon to trap an intruder between two portcullises: first, the portcullis at the end of the gatehouse was lowered in front of the attacker, and then, before he could escape, the one behind him was also lowered, trapping the intruder between the two metal grills where archers could fire upon him and the attacker had limited opportunity to defend himself.

The passage through the gatehouse was often riddled with traps. ‘Murder holes’ were openings in the ceiling of the passage used by the defenders to pour boiling water (oil was too expensive and hard to obtain), rocks and other heavy objects onto attackers. Water could also be poured down these holes to extinguish fires.

Arrow slits were small openings in the stone wall through which archers defending the castle would fire against enemies inside the gatehouse.

A gatehouse with these fortifications would have presented a very difficult proposition indeed.

As we will see, many castles were surrounded by water-filled moats, meaning that attackers would have had to find a way to cross these moats before even reaching the gatehouse.

Most British Castles are found in low-lying open areas and few had the chance to take advantage of natural defenses, such as perching upon rocky outcrops (Goodrich Castle or Stirling Castle) or being protected by sheer cliffs (Dunnottar Castle).

However, rather than seeing this as a problem, Castle designers used what they had to enhance the Castle features. In many cases, this involved using local water resources to build a moat.

A moat was a defensive ditch built around the castle, and it could be either dry or filled with water. They were usually crossed by a drawbridge which was removed (lifted with a simple crank) when attackers were nearby. 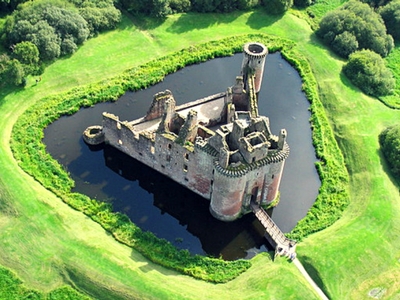 Few castles had the advantage of a fresh-flowing natural moat; this meant that most often moats were made by damming nearby rivers to create a stagnant pond around the castle. Unfortunately, all the sewage from inside the castle would have been directed straight into the stagnant moat, so you can imagine the smell!

In later castles, moats were designed to make the castle appear grander and more impressive, rather than have a real defensive role. One of the best examples is Bodiam Castle where the moat is now regarded as an ornamental feature rather than a defense.

In the early stone castles, the keep was the biggest and most important tower, while the rest of the towers (if there were any) had a secondary role. Generally, these towers were positioned along the curtain wall to allow archers to fire at enemy attackers outside the wall, or along the wall if they managed to make it that far.

In later designs, however, the towers became an integral part of the castle’s defensive strategy. The new approach was to design castles on a symmetrical plan with towers on each of the corners.

Originally, towers were built in a square shape. However, attackers soon found out that by burrowing under one of the corners of the square foundations, they could undermine the entire tower, with devastating consequences for the defenders. Castle designers responded by building round towers, with no corners which could be undermined. That is why late Medieval Castles had circular towers.

In later Medieval times, castle design evolved and by the end of the 12th century a new type of castle had appeared: the concentric castle. Concentric castles represent one of the high points in Medieval military architecture.

These castles were usually built without a central keep, on a square or polygonal plan, with towers facing all directions and a double curtain wall surrounding them. At their peak-time, concentric castles were so formidable that attacking them directly was deemed hopeless.

However, with the advent of gunpowder and the development of new weapons and tactics to attack them, true castles began to fall from fashion and their original defensive purpose was taken over by civil buildings such as star-forts, towers or bastions. They were eventually succeeded by country houses and palaces as high-status residences.