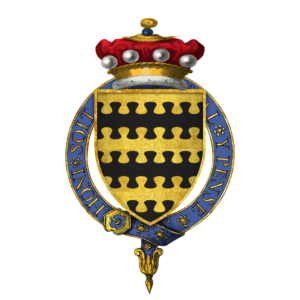 William came from a family of long military service to the throne; his father John Blount died when he was 13, and gave wardship to his brother, James. Fortunately for the family fortunes, James jumped ship from Richard III, joining Henry Tudor in exile. John Blount had learned enough about royal service to warn against it; he left advice in his will to his sons:

“live right wisely and never to take the state of baron upon them if they may leave it from them, nor to desire to be great about princes for it is dangerous”

Mountjoy ignored his father’s advice. And in 1497, fired by the love of learning and culture he travelled to Paris, a journey that would change his life and of the future king, Henry VIII. Because there he met Desiderus Erasmus, and live with him for a year under his tutelage. Erasmus was as star-struck as his pupil. When Mountjoy invited him to come to London in 1499, Erasmus wrote:

“Lord Mountjoy swept me away…where indeed would I not follow a young man so enlightened, so kindly and so amiable? I would follow him, as God loves me, even to the lower world itself”

Mentor to a Prince – socius studiorum

Mountjoy invited Erasmus because in 1498 he was appointed to be Prince Henry’s ‘companion in studies’. Mountjoy was to transform Henry’s education – to be England’s first ‘Renaissance Prince’. Mountjoy brought connections with the finest scholars of the ‘new learning’; not just Erasmus, but the leaders of Humanist thought in England – William Grocyn, Thomas Linacre, John Colet, William Lily; and their protege, Thomas More. Before long, Henry’s old schoolmaster John Skelton, was replaced with men who had been seeped in the classics, John Holt, and William Hone.

As a 22 year old nobleman, heir to the traditions of chivalry and military service as well as an enthusiast for the new learning, Mountjoy was perfectly placed to light the same fire in the intelligent young prince Henry.

In 1499 Thomas More and Erasmus were invited by Mountjoy to meet his protege the 8 year old Prince Henry. 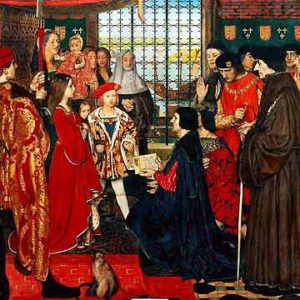 Erasmus described the event in a letter.

I was staying at lord Mountjoy’s country house when Thomas More came to see me, and took me out with him for a walk as far as the next village, where all the king’s children except prince Arthur … were being educated. When we came into the hall, the attendants not only of the palace but also of Mounjoy’s household were all assembled. In the midst stood prince Henry, then nine years old, and having already something of royalty in his demeanour, in which there was a certain dignity combined with singular courtesy. More… presented [Henry] with some writing. For my part, not having expected anything of the sort, I had nothing to offer, but promised that on another occasion I would in some way declare my duty towards him. Meanwhile I was angry with More for not having warned me, especially as the boy sent me a little note, while we were at dinner, to challenge something from my pen. I went home, and in the Muses’ spite, from whom I had been so long divorced, finished the poem within three days.

Under Mountjoy’s guidance, Henry’s education was modern, thorough and unusually prolonged. It gave him a deep understanding of the theology and the classics. Mountjoy remained in correspondence with Erasmus throughout his life; “the sun never shone on a truer friend of scholars” Erasmus was to write.

Servant of the king

On Henry’s accession in 1509, Mountjoy became a trusted servant of the king, like his family before him. He was Lieutenant of Hammes in the pale of Calais for 20 years, was sent to Spain on diplomatic service, served in Henry’s French wars, and sat in the court that condemned the Duke of Buckingham. He earned the fruits of his long loyalty; made Knight of Master of the Mint, a knight of the Garter in 1526, with a subsidy assessed at £1000 in 1527.

Mountjoy and Catherine of Aragon 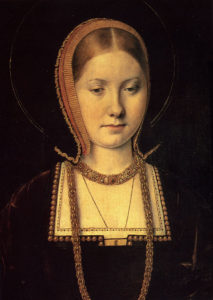 In 1509, Mountjoy married one of Catherine’s attendants when she was Princess of Wales, Inez de Venegas. In fact this was already Mountjoy’s second marriage; he would be married 4 times. In 1512 he was the obvious choice to become the head of the Queen’s household as Lord Chamberlain. The relationship seems to have been a happy one; in 1525 he solicited a treatise on the subject of marriage from Erasmus, and it was published in 1526 and dedicated to Catherine.

But the king’s ‘Great Matter’ put Mountjoy in a terrible position, torn between loyalty to his King and to his Queen – maybe the words of his father came back to him then. In 1530 he put his name to the open letter to Pope Clement in support of the king’s divorce; even worse in 1533 he was head of the group that went to see Katherine to urge her to submit to the king’s new marriage and acknowledge herself dowager princess – which the indomitable Katherine of course resolutely refused. this was too much for Mountjoy and he begged Thomas Cromwell to release him:

“It is not my part, nor for me this often to vex or unquiet her whom the king’s grace caused to be sworn unto and truly to serve her to my power”

Mountjoy died in November 1534, and was buried at Barton Blount in Derbyshire. He left 6 children from his four marriages. His eldest daughter by his third wife, Gertrude, Princess Mary, and shared Mary’s downs. When Mary became queen, she also then shared in the ups, becoming her lady in waiting.

He was succeeded by his heir from his third marriage to Alice Keble by Charles Blount, who also served Henry VIII and died only 28 years. Charles Blount’s advice to his own children must have made his grandfather old John Blount turn in his grave. He advised his children to